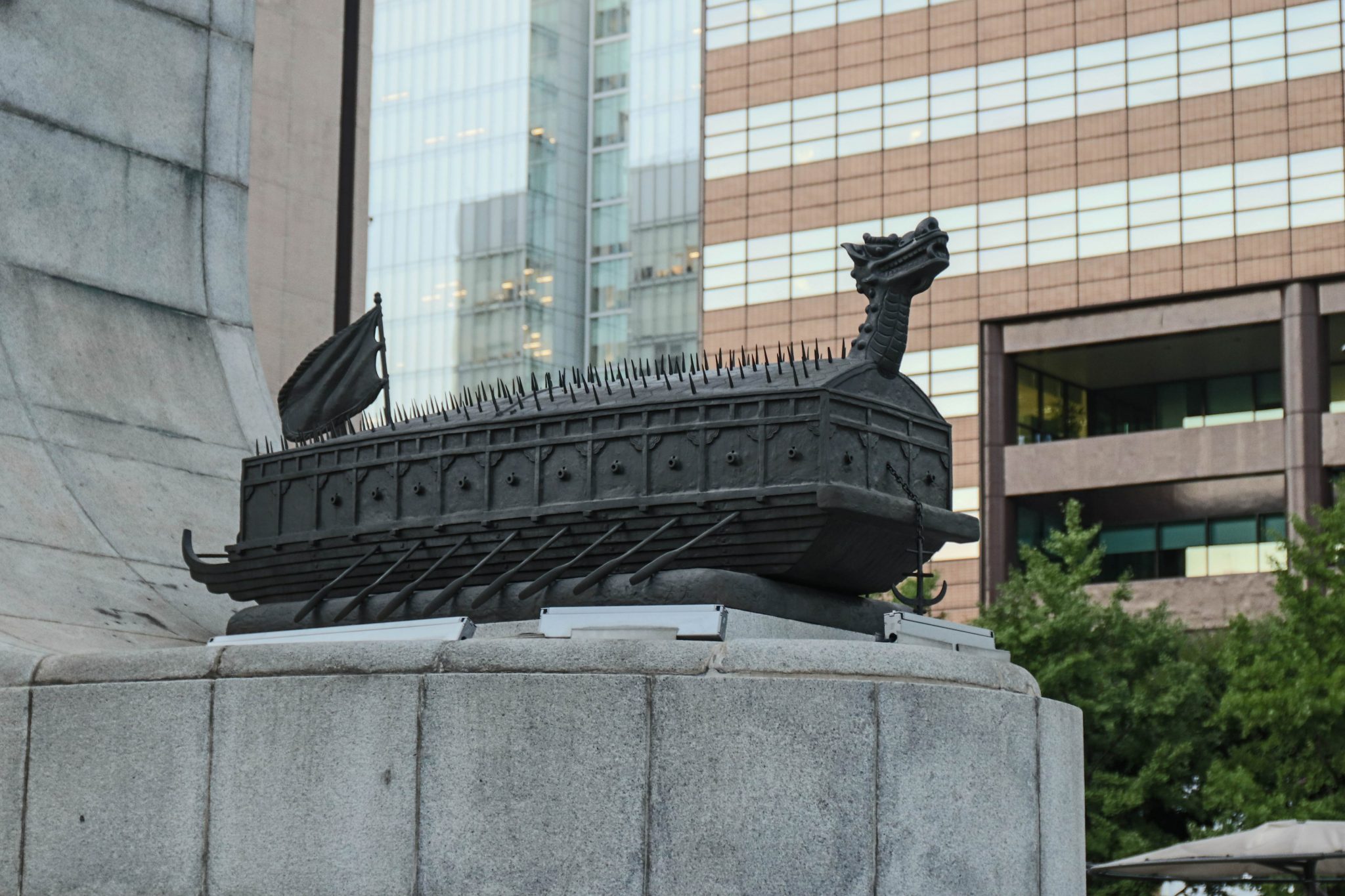 One of the problems of being both a collector and single is not having a wife to firmly if lovingly insist that enough is enough. I will always find room for another acquisition. Just move a couple items around and, voila!, space magically appears. As a result, my house is, to put it politely, “full.”

I tend to write downstairs while sitting on a couch. The nearby coffee table and items on it used to be covered with a mound of unfiled paper and detritus from various trips over the years. It simply was easier to toss stuff in a pile than to sort through the material and decide what deserved to go and stay.

However, as COVID-19 arrived my travels ended. Being home gave me extra time for clean-up, including of the table. The excavated centerpiece is a chess set, one of many that I’ve picked up over the years. At one end is a large eagle figurine, another of my collecting interests. At the other is a big “turtle ship” model. Strewn about the table and on the chess set are small eagles, lead Civil War soldiers, Soviet propaganda tchotchke, and three small turtle ships.

Over the years I found several smaller versions. Metal models in antique shops. Smaller wooden ships of different sizes and colors. I am up to six, which means I have a serious collection.

I started collecting “stuff” while in high school. I came about my interest naturally — inheriting the collecting gene from my parents. My father was in the Air Force, and we spent my high school years in the United Kingdom. My parents got into antiques, and I often went with them as they visited antique shops hither and yon.

My buying power was limited, though I devoted most of my earnings from delivering papers, bagging groceries, mowing lawns, and baby-sitting to picking up interesting “stuff,” mostly chess sets, militaria, and books. I still have most of them, wishing that I’d had a better eye and found some rarities that today would magically upgrade my retirement plans.

When we returned to the U.S., my collecting endeavors ended. I went off to college and had less time and even less discretionary funds. When I moved from the West to the East Coast to join the Reagan presidential campaign in 1980 — and subsequently the administration — my “stuff” followed me. In the succeeding years I generally collected chess sets when I came across them through the want ads or while traveling overseas, but not much else.

Then in 1987 I met a local firefighter, improbably the county fire marshal, who ran an ad listing some chess sets for sale. Steve’s core interest was beer steins, but he would wander in and out of other collecting categories. Chess sets was one. I caught him on his way out. A few months later he contacted me with some more sets that he wanted to unload. We started getting together, and he eventually asked if I wanted to join him and “hit the fleas,” which his girlfriend had no interest in doing. Indeed, she was happy for me to spend a day visiting flea markets and antique shops, allowing her to spend her time in more congenial pursuits.

Most of the “stuff” was cheap. I had no illusions about making a fortune through a fortuitous “Antiques Roadshow” find. Rather, collecting became my primary means of relaxation, providing a welcome time away from politics. Every trip out with Steve was a new bloodless hunt, with the quarry varying day by day. What mattered most was finding and acquiring something new — an M&M dispenser was as satisfying as a battlefield print.

Perhaps most frightening was how easy it was to find new game to hunt. Steve and I joked that all it took was three of something to be a collection. Although I’m not Orthodox, I took a liking to the religious imagery in icons. I bought eagles for my parents, who enjoyed them, until I decided that I liked them too and should collect them. A stein dealer who supplied Steve had a Soviet cigarette case for sale, which drew my interest, beginning an entirely new collection. I fell for trench art, which entailed turning military surplus, such as shells, into practical items like vases and lamps. Once I started looking for interesting cigarette cases, I found lighters and ashtrays. I’ve always loved books and history, and was enchanted by older, well-illustrated volumes. I grew up on military bases and had wall space to fill, which led me to turn my gaze to military subjects. I was a chocoholic, with a particular taste for M&Ms, so what better to scatter about the house than M&M tchotchke?

Then there were the turtle ships.

Most normal people have no idea what they are. But I work on Korean issues. And turtle ships, with a dragon prow and armored top — hence the “turtle” imagery — were used by Koreans in the late 16th century to defeat an invasion attempt by Japan. Thus, turtle ships are a celebrated aspect of Korean history. And models of various sorts have been made to celebrate victory over the hated enemy (alas, Japan remains a hated enemy in both Koreas today!).

Out with Steve at a flea market in Maryland many years ago I came across a large turtle ship. I was entranced — I wondered how it made its way across the Pacific and on to the East Coast. What better way to mix my professional interest and personal hobby? Of course, I bought it, even though it is a strange creation that elicited mystified queries from friends.

Over the years I found several smaller versions. Metal models in antique shops. Smaller wooden ships of different sizes and colors. I am up to six, which means I have a serious collection. Of turtle ships.

It is hard to choose my favorite item — there is so much “stuff” of so much variety. However, as an enthusiastic, if not particularly proficient, chess player I believe it is my T-34 chess accessory. Over the years I have bought commie desk propaganda — plastic pictures of Lenin and such — from a Ukrainian on eBay. Years ago he came up with a large carved wooden T-34 tank, with a chess clock embedded in one of the treads. Pick up the turret and there is space below for a chess set. I imagine a tough, war-weary Soviet tanker relaxing after World War II by carving the tank for use when playing chess with his friends. It is a piece of history that embodies my interests in chess and militaria. Truly a three-fer!

The collecting has been great fun. Unfortunately, when Steve sickened a few years ago our weekly trips ceased. We still got together — his family had become mine as well — but I missed our hunts, and the feeling of success after we bagged our game. He died more than four years ago, and I was his estate’s executor. I found it particularly painful to sell items of his that he had bought on our trips. I still find myself occasionally seeing something about collecting, or a bit of political inanity, and thinking that I should send him a note.

I also decided that my house really has gotten, well, full. It probably made more sense to put discretionary funds into my retirement rather than tossing cash away on more “stuff.” Which means I no longer look much for new acquisitions. So my décor has stabilized. Still, even though I realize I don’t “need” anything more, I miss the pleasure of moving things around to welcome a new trophy from the latest hunt.

But then came COVID-19. During busy periods over the years I often put new purchases in boxes and bags behind couches and under tables. I figured I would find a spot for them later when I had a spare moment or two. There also was a pile of unopened boxes of eBay purchases from more than a decade ago, when I stopped searching for “stuff” online. Sorting through it was another task on my long “to do” list.

With time at home I decided to create order out of chaos, opening boxes and dragging acquisitions out of hiding. I found all sorts of items looking for a home. It was Christmas in the spring! I had to find new spots for additional M&M characters, ashtrays, commie decorations, lead soldiers, eagles, and, of course, turtle ships.

Two of the latter, I remembered, came from a New York City flea market that closed years ago. Apparently on my return from that trip I put the bag aside, after which it disappeared from my consciousness. I felt particular pleasure at rescuing these special acquisitions from obscurity. Now this unique collection is highlighted on my coffee table in the middle of the living room. Can anyone else in Washington claim such a historic collection?

Even as I largely abandon active collecting — though I would never hesitate grabbing another turtle ship — what will eventually happen to my “stuff” becomes an interesting question. I was once asked if I worried about the work I was creating for my heirs. Of course not, I replied. My sister can hold a big garage sale, foist the “stuff” off on family and friends, or throw it all away, since I will be well beyond caring.

And when it comes to obituaries, I think collecting might offer a better legacy than politics. Do I want one that emphasizes that I spent a lifetime telling the world what I thought while achieving nothing noticeable? Or that I possessed one of the world’s greatest turtle ship collections? I prefer the latter.

Doug Bandow
Follow Their Stories:
View More
Doug Bandow is a Senior Fellow at the Cato Institute.
Most Popular
1
Hither and Yon
POTATUS Speaks, A Nation Groans
by Scott McKay