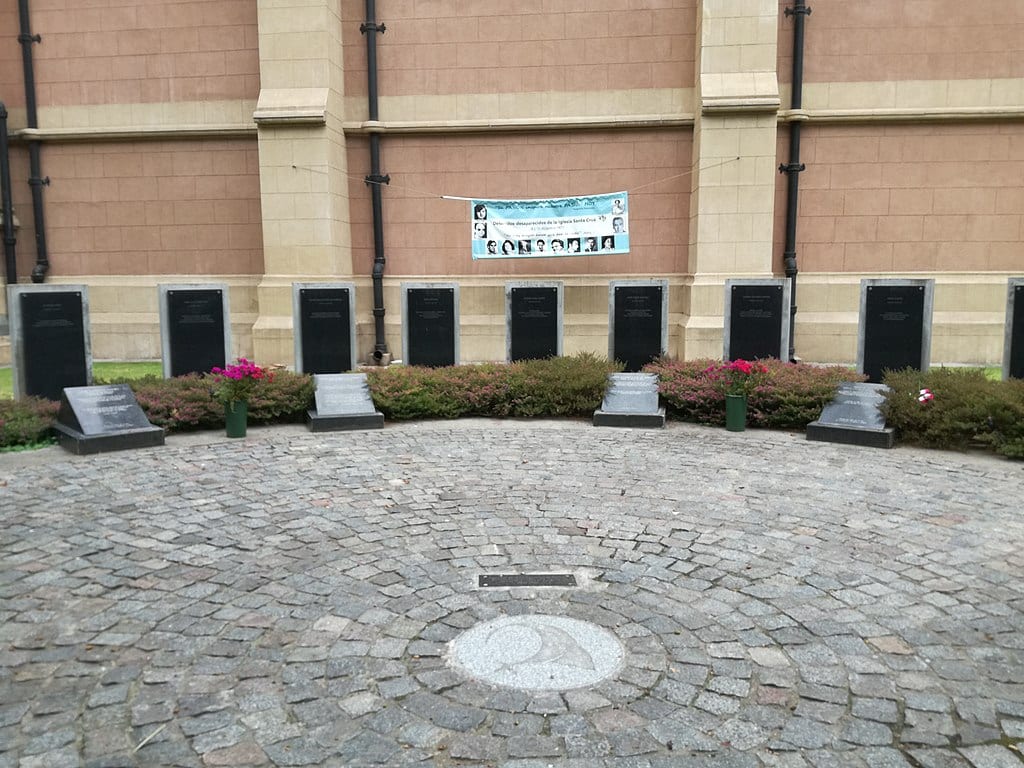 “I have met many Marxists in my life who are good people, so I don’t feel offended,” Pope Francis has said in response to the charge that he is a communist. As I’ve reported before but bears repeating in this context, Pope Francis grew up in socialist Argentina, an experience seared in his mind:

He told the Latin American journalists Javier Camara and Sebastian Pfaffen that as a young man he “read books of the Communist Party that my boss in the laboratory gave me” and that “there was a period where I would wait anxiously for the newspaper La Vanguardia, which was not allowed to be sold with the other newspapers and was brought to us by the socialist militants.”

The “boss” to whom Pope Francis referred is Esther Ballestrino de Careaga. He has described her as a “Paraguayan woman” and a “fervent communist.” He regards her as one of his most important mentors. “I owe a huge amount to that great woman,” he has said, saying that she “taught me so much about politics.” (He worked for her as an assistant at Hickethier-Bachmann Laboratory in Buenos Aires after he got the equivalent of a high school degree in chemistry.)

“She often read Communist Party texts to me and gave them to me to read. So I also got to know that very materialistic conception. I remember that she also gave me the statement from the American Communists in defense of the Rosenbergs, who had been sentenced to death,” he has said. Learning about communism, he said, “through a courageous and honest person was helpful. I realized a few things, an aspect of the social, which I then found in the social doctrine of the Church.”

In other words, he found in his warped conception of Church teaching the communism to which Ballestrino introduced him.

As the archbishop of Buenos Aires, he took pride in helping her hide the family’s Marxist literature from the authorities who were investigating her. According to the writer James Carroll, Bergoglio smuggled her communist books, including Marx’s Das Kapital, into a “Jesuit library.” (I am hoping to visit it.)

After Ballestrino found herself on the wrong side of the state in 1977, she was tossed out of a plane, and her body eventually washed ashore. Vatican correspondent John Allen has reported what happened next:

“Almost three decades later, when her remains were discovered and identified, Bergoglio gave permission for her to be buried in the garden of a Buenos Aires church called Santa Cruz, the spot where she had been abducted. Her daughter requested that her mother and several other women be buried there because ‘it was the last place they had been as free people.’ Despite knowing full well that Ballestrino was not a believing Catholic, the future pope readily consented.”

On Monday, I visited that grave at Santa Cruz church. It was an illuminating visit. The pope’s communist mentor is pictured throughout the church and is given pride of place in its cemetery.

The church itself has become a shrine to her and other communist radicals, whose pictures and relics pervade it. I noticed that the stations of the cross in the church have been comically politicized, placing Jesus Christ in contemporary settings. He is depicted as a communist martyr, crucified by militarists and greedy capitalists.

Once a striking 19th-century church, Santa Cruz is now just a propaganda prop for Pope Francis’s gang of communist clerics. It is pitiful and puts me in mind of what a precocious teenager said to me the other day after I asked her what she thought of the pope: “He is so bad and ridiculous I don’t think he is the pope. Nothing he does is like what other popes have done.”

That is a common refrain in conservative circles here. I asked one traditionalist professor why Bergoglio copped to his tutelage under an outré radical like Ballestrino. He replied, “Bergoglio wanted to impress global leftists, especially at a time when reports surfaced about how he had let the state kill two commie Jesuits during the Dirty War.”

The latter matter is too complicated for me to resolve. But I take his point. In 2013, Bergoglio was eager to play up his left-wing credentials to dilute the impression he was a toady to Argentine thugs. Clearly, as a power-hungry cleric who instinctively sided with the Argentine deep state, Bergoglio was capable of some crude compromises.

But as pope, he wants the public to see him as a heroic, principled socialist. Again, from my 2017 column on Pope Francis’ communist influences:

“I must say that communists have stolen our flag. The flag of the poor is Christian,” he said outrageously in 2014. Such a comment would have disgusted his predecessors. They didn’t see communism as a benign exaggeration. They saw it as a mortal threat to God-given freedom, as it urges governments to eliminate large swaths of individual freedom, private property, and business in order to produce the “equality” of a society without economic classes.

“Inequality is the root of evil,” Pope Francis wrote on his Twitter account in 2014. Karl Marx would agree. But past popes would have dumped a bucket of water on any priest foolish enough to say that. According to traditional Catholic theology, the root of all evil came not from inequality but from Satan’s refusal to accept inequality. Out of envy of God’s superiority, Satan rebelled. He could not bear his lesser status.

He was in effect the first revolutionary, which is why the socialist agitator Saul Alinsky — a mentor to Barack Obama, Hillary Clinton, and countless other public nuisances — offered an “acknowledgment” in his book, Rules for Radicals, to Satan. Alinsky saw him as the first champion of the “have nots.”

During Pope Francis’s visit to Bolivia in July 2015, he received from Evo Morales, Bolivia’s proudly Marxist president, a sacrilegious crucifix of Jesus Christ carved atop a hammer and sickle. Morales described the gift as a copy of a crucifix designed by a late priest, Fr. Luis Espinal, who belonged to the Jesuit order (as does Pope Francis) and had committed his life to melding Marxism with religion. (Pope Francis honored Espinal’s memory upon his arrival in Bolivia.)

Had John Paul II been given such a grotesque cross, he might have broken it over his knee. Not Pope Francis. He happily accepted the hammer-and-sickle cross, telling the press on the plane ride back to Rome that “I understand this work” and that “for me it wasn’t an offense.” After the visit, Morales gushed, “I feel like now I have a Pope. I didn’t feel that before.”

I thought about all of this as I walked through Santa Cruz church. Littered with communist polemics — a Leonardo Boff book on liberation theology greets visitors in the pastor’s office — the parish is proof of the communist infiltration of Holy Mother Church — an infiltration that landed a disciple of Esther Ballestrino on the chair of St. Peter.