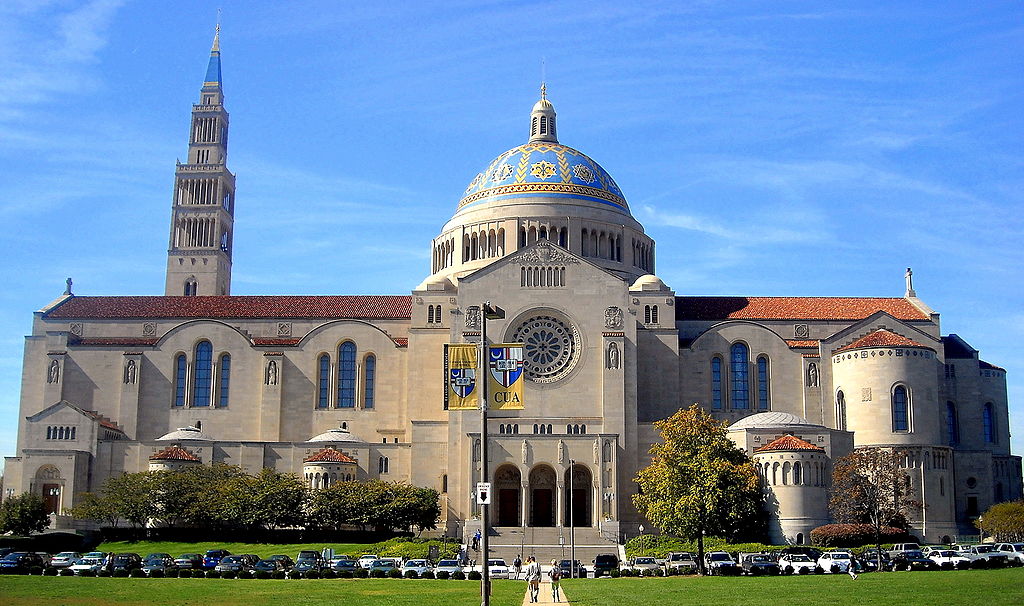 I wrote last week about Cardinal Wuerl’s decree that I be included, Willie Horton-style, in a wanted poster at the Basilica of the National Shrine of the Immaculate Conception. He instructed his security guards to call police “immediately” upon seeing me at the Shrine. In the past, his ass-kissing goons, such as auxiliary bishop Barry Knestout (who is now the bishop of Richmond, a plum Wuerl tossed to him after his long years of ruthless service to the Gay Mafia), made a distinction between “worship” and journalism: permitting the former, denying the latter. In Wuerl’s latest edict against me, no such distinction is made, which constitutes a brazen violation of the Code of Canon Law. Oh, well. No one seems to care.

It turns out that Wuerl’s edict against me is even more Machiavellian than I realized. A lawyer, who on her own initiative researched his machinations against me, called to say last week, “Did you know that he has also barred you from St. Matthew’s Cathedral? It looks like he has taken a temporary protective order out against you, which means you can’t step on diocesan property anywhere without potential risk of arrest and imprisonment.”

I had suspected that Wuerl would try to get one. Wuerl is notorious for urging his lawyers to play hardball against less-than-docile members of his flock. I have heard stories about “NDAs,” “barring orders,” and so forth. Given that one of Wuerl’s thugs had tailed me last month and tried to get me into a car crash, I was prepared for anything. Not that anyone cares. The establishment press, both secular and Catholic, still hasn’t reported on any of this! I guess I am just not the sympathetic Jim Acosta of anti-Wuerl reporting.

So the lawyer’s heads-up didn’t shock me, though I have to laugh at what a Sneaky Pete Wuerl is: he evidently made sure to get a temporary protective order because in DC that (as opposed to a permanent protective order) doesn’t require serving notice to the target of it. In other words, it looks like Wuerl was hoping to goad the police into catching me unaware of the protective order on diocesan property in the hopes of my arrest and imprisonment. Not exactly pastoral!

A chancery-connected source told me that one of my Tweets unnerved Wuerl so badly he had three police cars and one of his bag men sent to the St. John Paul II Seminary to catch me roaming the grounds. But I wasn’t there that night. It was, incidentally, the night Wuerl’s dream of surviving the scandal died. He got it into his head that if he could just convince the seminarians to take an all-is-well group photo with him that he could weather the protests. But as I noted in the Tweet that apparently sent him into a rage, some of the seminarians balked at his plan to hold a group photo. They weren’t terribly keen on lending their support to a charlatan and bitchy dirtbag, who has been furtively building, at their expense (in terms of squandered seminary funds), a retirement pad for himself in the back of the seminary — a grotesque expenditure that it appears he won’t even see to fruition.

“Wuerl is getting out of town,” says a source close to Wuerl’s office. “He knows that he has become a disgrace to himself and everyone around him. He can’t stay in DC.” (Wuerl was spotted on Monday in Rome and it appears he will stay there for a least a week, according to media reports.)

Last Friday, Wuerl launched his ludicrous “Season” of healing by holding a Mass at which he and a couple of his auxiliary bishops (Mario Dorisonville, Teddy McCarrick’s mansionmate, was one of them) prostrated themselves for “all of three seconds,” as one wag put it to me. It was typical Wuerl: a hopelessly inept and telegraphed PR move that he couldn’t execute with any charisma or finesse. Like the Wizard of Oz after he is stripped of all of his booming technology, Wuerl, sans the atmosphere of ring-kissing and awe that once surrounded him in better times, is a nobody who barely casts a shadow. Up close, he looks like a scrawny, shortish, sallow-faced sociopath, sort of like Mr. Burns from The Simpsons but somehow less likable.

I had to laugh that the Basilica of all places banned me from the sacraments. It is one of the principal tributaries of the DC Gay Mafia’s river of filth. Its rector, Monsignor Walter Rossi, is a Gay Mafioso of the first order. The other day, an alumnus from Catholic University contacted me and said that Rossi had subjected him to gross insinuations and harassment during his time as a student there. I have heard multiple stories along those lines. I even hear whispers that the Washington Post, which has been useless during Wuerlgate (even though it is edited by Marty Baron of Spotlight fame; his bulb has clearly fizzled out), is looking at Rossi’s astonishingly scummy tenure.

Please let me know, Cardinal Wuerl and Monsignor Rossi, when I have reached your level of holiness and can return to the sacraments at “your” Basilica without police officers apprehending me.