Russia Watch Biden Administration,nuclear weapons,Putin,Russia,Ukraine What’s Next for Putin? - The American Spectator | USA News and Politics
Menu
Russia Watch
What’s Next for Putin?
He is surely contemplating how to avenge his humiliation.
by Avigdor Haselkorn
A Russian T-72 with its turret blown off near Kyiv in early April (kibri_ho/Shutterstock) 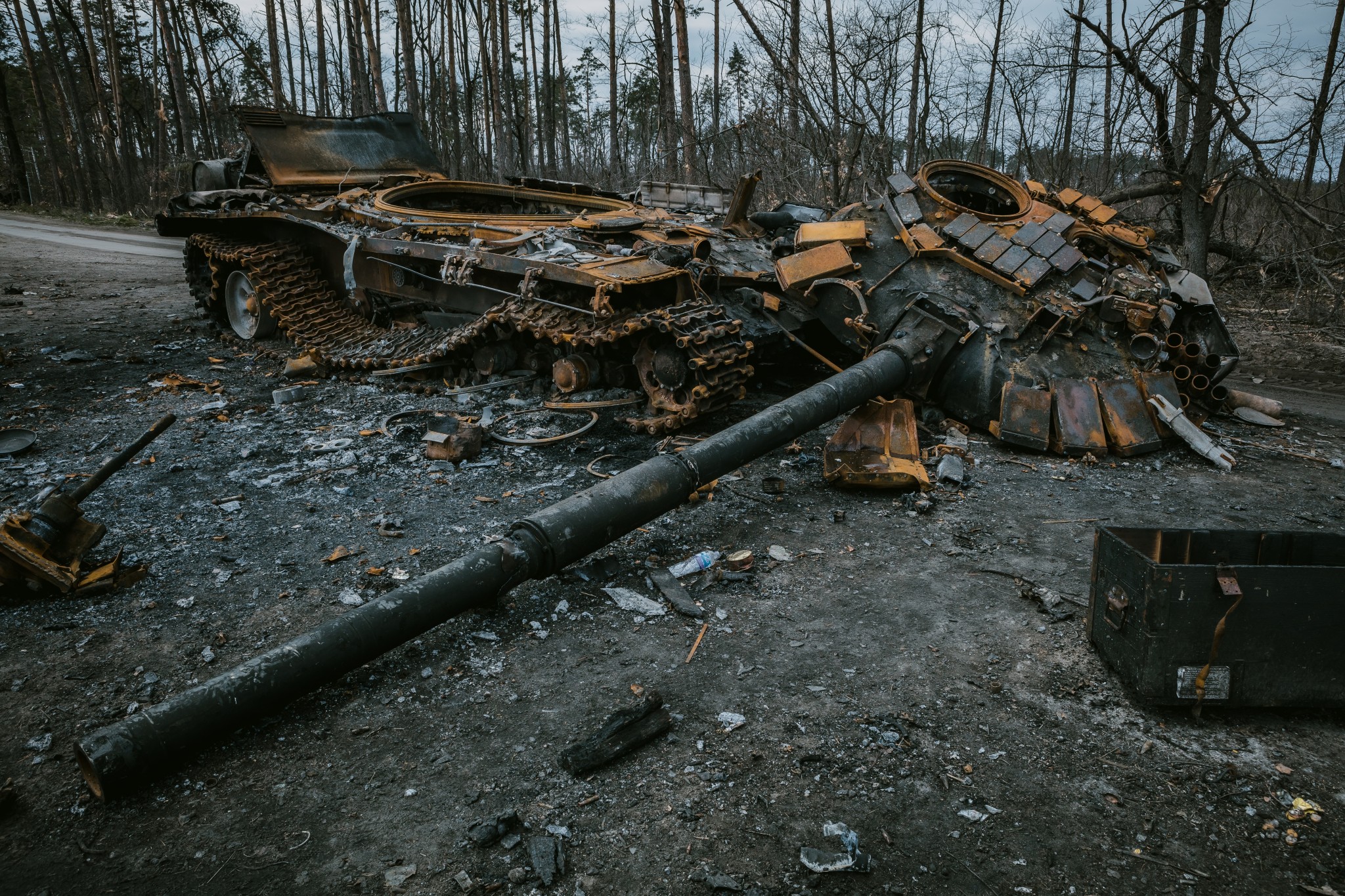 What can be expected from a leader whose mantra has been to impart strength, menace his neighbors, and project power to faraway theaters but whose military has been dealt a humiliating blow by a smaller, weaker adversary?

The short answer is he would try to erase the image of a faltering superpower by scheming to wrest some kind of victory from the jaws of defeat. This is why the impending Russian attack on Ukraine’s eastern Donbas region is not only important strategically to Russia’s President Vladimir Putin but is shaping up as the linchpin of his efforts to reclaim his military’s reputation as a formidable force.

Yet achieving such a victory is far from certain and if costly may prove wanting in rectifying the harm the war in Ukraine has caused to Russia’s standing on the global scene.

After all, Russia’s military’s performance there exposed numerous material problems, which will not be easy or cheap to fix. These include fatal design flaws that have crippled the performance of some mainstay weapon systems of the Russian army.

For example, the war has plainly demonstrated that Russia’s T-72 main battle tank is highly vulnerable to modern day anti-tank weapons even in its upgraded versions of the B3 and B3M models.

Numerous pictures have been circulated of T-72 tanks with their turrets completely blown off. This disastrous outcome is the result of the Russians equipping the T-72 with an autoloader that pared down the crew from the usual four to three tank men and compressed the space inside the turret. It made the turret smaller, and contributed to the much lower silhouette of the T-72. Yet the tank has its ammunition storage in the form of a carousel in the body of the tank immediately under the turret with no barrier between the crew and the stored munitions. When the T-72 is hit by an anti-tank weapon such as the U.S.-made Javelin, designed specifically to penetrate the turret, the effect is catastrophic, usually resulting in the incineration of the crew and the blowing off of the turret.

Likewise, some Russian tanks operating in Ukraine are equipped with jury-rigged metal cages over their turrets, aimed to deflect anti-tank projectiles. Yet Western analysts labeled the contraptions “emotional support cages,” and the Economist compared it to the ghost shirts of Lakota warriors, which were supposed to stop bullets but did not.

The invasion also demonstrated glaring intelligence and doctrinal failures as well as poor command and control of the troops. Instead of a combined-arms battle tactic adopted by most modern armies, Russian forces were operating as if they expected no or minimal resistance. Their commanders eschewed coordinated attacks and mostly kept to the main roads, where their mechanized units presented easy targets for small Ukrainian squads armed with top-of-the-line anti-tank weapons.

Training, morale, and discipline among Russian recruits seems to be dismal. Reportedly soldiers lack basic supplies such as food and proper clothing. Their ransacking of Ukrainian homes, even looting such items as underwear and frying pans, indicates perversely how dilapidated these conscripts are. Reports also indicate much intact Russian equipment was abandoned by its crews. Russian soldiers have even used unencrypted channels to transmit confidential information. The high number of senior Russian officers who have been killed or wounded apparently resulted from their presence at the front lines, where they sought to prevent defections and get units to push forward.

The Russian economy, struggling under severe sanctions, is expected to shrink between 10 and 15 percent this year. The exodus of Western companies and the dwindling of foreign-sourced inputs, which will force stores and factories to shut down, will surely cause unemployment to explode. Moreover, the sanctions also make it harder for Russia to finance the war, which likely led Putin to charge that the West’s economic penalties were “akin to an act of war.”

Worse yet, the invasion unnerved Putin’s great nemesis — the NATO alliance — sufficiently for its member states to unite, boost their defense spending, and seek greater U.S. military presence on the continent. Finland and Sweden, two countries who kept their neutrality for decades, are now seriously considering joining NATO.

From Moscow’s point of view, these developments have not only increased the strategic threat to Russia but also demonstrated its failure to deter what it sees as unequivocally ominous political and military trends.

Thus, assuming he is aware of these daunting strategic, military, economic, and political realities, Putin’s future course of action will likely be governed by the following considerations:

First, given the Ukraine experience Putin may feel less than certain that Russia’s conventional-weapons option is by itself adequate both as a deterrent and as defense against the mounting NATO “threat.”

He is surely contemplating how to avenge his humiliation.

Second, in light of Russia’s recent threats of “unpredictable consequences” over arms supplies to Ukraine, it is certain he sees the ongoing NATO logistic pipeline as his Achilles’ heel. He has apparently resolved to block this “interference” by any means necessary as a precondition to assuring victory.

Third, he may be operating under time horizon constraints — revamping the Russian military will take time and Putin may have decided he needs a stopgap option to bolster Russia’s deterrence and support its conventional capabilities forthwith.

Fourth, economic considerations may militate against solely relying on Russia’s standing army given the striking deficiencies it displayed in the war, which could translate into a costly overhaul.

Finally, there is the personality of the Russian leader himself. William Burns, director of the CIA, recently described Putin as the “apostle of payback.” He is surely contemplating how to avenge his humiliation. After all, the Russian leader has rarely missed an opportunity to hype his country’s strength and to stoke fears among his enemies. He will undoubtedly act so now to remind an increasingly skeptical world of Russia’s capabilities and its superpower status.

Combined, these factors clarify why Russian leaders are increasingly waving their nuclear option. For example, in mid-April Dmitry Medvedev, deputy chairman of Russia’s Security Council and a close ally of Putin, said that should Sweden and Finland join NATO “there [would be] no more talk of any nuclear-free status for the Baltic — the balance must be restored.” Earlier, in an interview on March 26, Medvedev stated that Russia could use nuclear weapons against an enemy that only used conventional weapons if it judged its “existence” to be in jeopardy. At the same time, Russian Defense Minister Sergei Shoigu, in a video uploaded on social media, asserted that nuclear “readiness” was a priority. (READ MORE from Avigdor Haselkorn: Putin’s Dangerous New Strategic Doctrine)

Dmitry Polyanski, Russia’s deputy ambassador to the United Nations, in an interview with Sky News on March 25, said that “It’s not the right thing to threaten Russia, and to try to interfere. So when you’re dealing with a nuclear power, of course, you have to calculate all the possible outcomes of your behaviour.”

Even a funeral, of all occasions, was used by Putin to signal his apparent readiness to use nukes. Local media made clear that while attending the services for Russian politician Vladimir Zhirinovsky, who died in early April, the Russian leader was shadowed by an aide carrying the “nuclear football” (a briefcase containing the codes needed to authorize a nuclear attack remotely known as the “cheget”). In effect, it was thus intimated that Putin could press the nuclear button at any time.

Clearly, in view of the Kremlin’s grandstanding, Western warnings, especially those by the Biden administration, that a Russian resort to tactical nuclear weapons “cannot be ruled out” are wrong and potentially dangerous. Rather, while it is crucial that Putin’s geopolitical ambitions be nipped in the bud, it is equally vital to address effectively his resultant game of “nuclear chicken” before it escalates to the real thing.

Avigdor Haselkorn is a strategic analyst and the author of books, articles, and op-eds on national security issues.