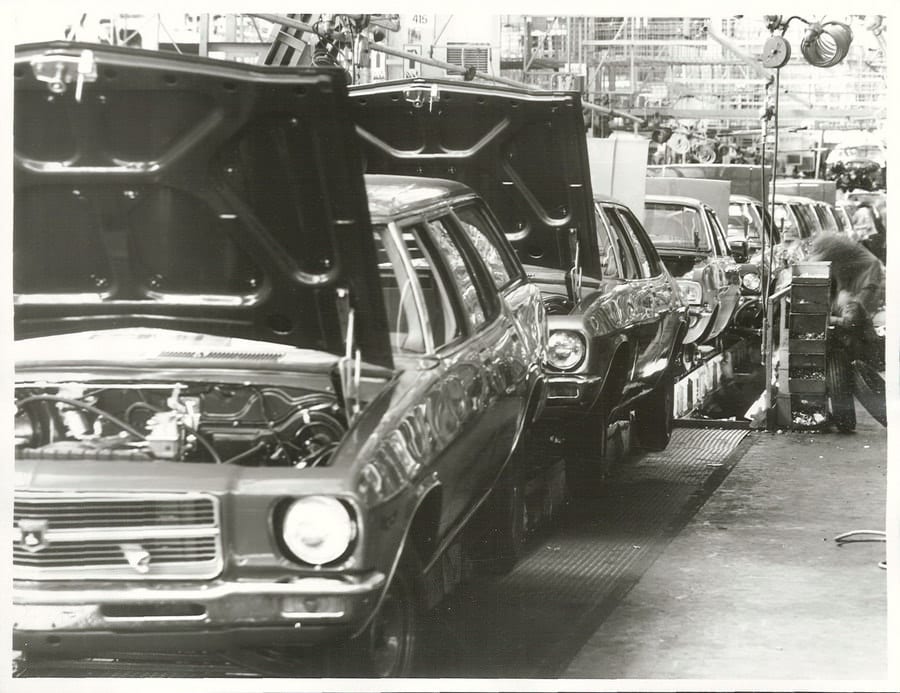 In 1953, Charlie Wilson (“Engine Charlie”) was nominated to be Secretary of Defense by President Eisenhower. Wilson was President of General Motors and there was concern that he might be inclined to favor his old company in his decision making. In the committee hearings prior to the Senate confirmation vote, he was asked about this, point blank:

“Yes, sir; I could. I cannot conceive of one because for years I thought what was good for our country was good for General Motors, and vice versa. The difference did not exist. Our company is too big. It goes with the welfare of the country. Our contribution to the Nation is quite considerable.”

Which, in time, was edited down the more epigrammatic:

“What’s good for General Motors is good for America.”

The assertion was pointed to by critics of American capitalism as signifying everything that was wrong with the system. But in the glow of hindsight, it seems merely an assertion of an obvious fact and also, something out of better times.

Would that it were true today.

Of course, back when Wilson made the remark, America was the dominant world automobile power. Japan and Germany were still clearing the rubble of World War Two. GM was a giant riding on the back of a colossus.

But Japan and Germany came back and other car makers from other nations got into the act. By the early’70s the American companies were in trouble. Competition, especially, from Japan, was making it hard on American car companies. A lot of this could be traced to the indifferent — not to say, shoddy — quality of their products. This was especially true of GM.

At the company’s plant in Lordstown, Ohio, workers on the assembly line sabotaged the cars they were building as a protest against the company’s management practices, driving no-telling how many American car buyers into the arms of the Japanese and their little zero defect “rice rockets.”

GM and the other American automobile companies rode that one out, but not without the help of the government in the form of trade restrictions on the surging Japanese automobile companies. The word “tariffs” was not used in polite conversation. Still…

So, thanks to a dose of protectionism, GM (and the others) survived and seemed to prosper. But there was a problem. The company was making promises that it could not keep. Its workers had good health care plans, which they would carry into retirement, and generous pensions. GM was described (by Warren Buffett, no less) as “a health and benefits company with an auto company attached.”

The company was spending more on health care than steel.

And, predictably, it went bust.

But it got a bailout. Taxpayers made it possible for the company to restructure and stay in business. The retirees kept their pensions and health care. The bondholders took a haircut but so what? They were, implicitly, just fat cats clipping coupons. The truth, of course, was that some of them were retirees, too, and they depended on the yield of those now worthless bonds.

But never mind, GM had been rescued by the taxpayers. The company, no longer nuanced by all that debt, went back to making cars and was profitable and it seemed that what was good for GM was good for America, just as Engine Charlie’s formulation had it.

When GM announced plant closings and layoffs. In America and Canada. No change in the way it does business in China.

The moves are being sold as transformative and necessary to the future health and prosperity of the company. Which may even be true. But they will not be good for the 15,000 people who will lose their jobs or for the communities (including Lordstown) that will lose the plants which are their economic foundations.

In the realm of formal economics, the arguments are all on the side of GM and against President Donald Trump who denounced the company’s moves. The case against Trump — and his tariffs which are said to have been a contributing factor in the GM moves — is iron clad. Trade is good and tariffs are bad.

So what, then, about bailouts? Which GM seems to be able to arrange whenever it is in need of one. If David Ricardo got it right, then doesn’t his truth always apply? Is there a clause somewhere that exempts GM?

There is a reason for the rise of populist sentiment in America. It comes down to a sense that the game is rigged.

And it is often very hard to argue that it is not.

Next time GM comes around with its hand out, many Americans will think, Donald Trump should slap it away.

Hard to see how if this latest move is good for GM, it is also good for America.