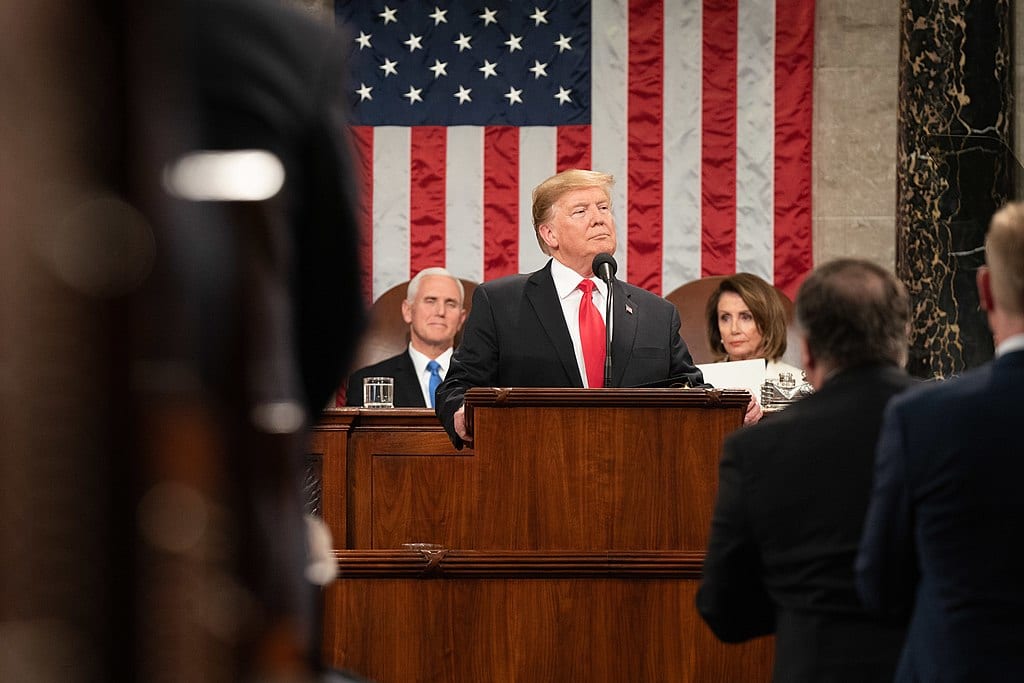 President Trump’s State of the Union address has now been appraised by the various partisans and commentators, and his supporters are claiming a big win. The polls look good and even some of the President’s critics are conceding that he carried the night. If it wasn’t a knockout, they say, then President Trump at least scored a TKO.

And, truth be told, by the usual metric of “peace and prosperity” he had reason to brag. To preen, even.

There was one piece of the picture that was missing and striking by its absence. The President neglected even to mention the matter of deficits and debt.

This doesn’t qualify as an understandable oversight, since the deficit is running at around a trillion dollars per year and that would be a hard thing to miss, even if you weren’t good at doing balance sheets. A trillion here, a trillion there… pretty soon you are talking real money. Which, incidentally, we don’t have. That’s why we “owe” it.

The debt is twenty-two trillion… and rising. We are fast approaching the point at which the amount we pay, annually, in interest on the debt will exceed what we budget for national defense. There is something troubling about that picture. Frightening, even, when you consider that the nation is, nominally, at peace. The economy is booming and there are more jobs than people to fill them. These are, by conventional thinking, the right conditions for running surpluses and paying down the debt.

Yet we continue to borrow.

Still, there are no voices raised in alarm. The old sub-species of “green eyeshade” Republican seems to have dwindled into near-extinction. Meanwhile, the strongest voices among the Democrats call for spending on a scale best described as “vast.” What, one wonders, are the figures on the cost — the true cost — of “Medicare for All”?

But these new Socialists do, at least, have a plan. They will get the money from the rich. These would be, “the billionaires.” From the people, in short, who financed Hillary Clinton’s last campaign.

One expects that these plutocrats won’t surrender easily and that it won’t just be Michael Bloomberg and Bill Gates paying for the “Green New Deal.” Which means either more taxes on the middle class or… more, and bigger, deficits.

Which is troubling enough. But what may be even more ominous is the general, pervasive problem of debt. There is, as reported by the Wall Street Journal, $86 billion in student debt owed by people over 60 years old, some of whom are “having funds garnished from their Social Security checks.”

Only mortgage debt is larger, in the aggregate, than student debt. Most of the people who owe this money are not over 60 years old and not having the money taken from their Social Security checks. They are young people who are just starting out. The load of student debt they carry is heavy enough that they are deferring such things as getting married, buying a house, and starting a family. The things, in short, that comprise the foundation of a modern society.

And, then, there are the consequences of debt taken on by state and local governments, especially in the form of pension obligations. The unfunded pension obligations in the state of Illinois are approximately $200 billion. Give or take. And that taking will come to about $50,000 from each Illinois household.

People are, understandably, fleeing the state. Forty-five thousand departed last year, which will oblige those who remain to dig yet deeper to get those pensions out of the hole

Then, there is consumer debt. Also corporate debt.

We live in a time when the sovereign answer to the problem (if it is, indeed, a “problem”) of debt is the “bailout.” The Savings and Loan industry found itself in a deep hole during the administration of George H.W. Bush. The government intervened. The bailout was successful, but it established a precedent.

Which returned in force during the Great Recession when the bailouts were extended to everything from AIG to people who owned cars with mileage above some government established guideline. We had the TARP program which went around looking for “shovel ready jobs” to throw money at.

A trillion here. A trillion there. Pretty soon, we were talking about real money.

And now? Well, here we are.

Buried in debt and unwilling to talk about it.

The State of the Union is…

If not broke, then certainly badly bent.

But let’s speak of other things.