Impeachy Keen,Top Story Burisma,Hillary Clinton,Hunter Biden,Joe Biden,Trump impeachment,Volodymyr Zelensky What About a Biden Impeachment Inquiry? - The American Spectator | USA News and Politics
Menu
Impeachy Keen
What About a Biden Impeachment Inquiry?
He also did what Trump is accused of.
by E. Donald Elliott
Joe Pesci in “My Cousin Vinny” (20th Century Fox) 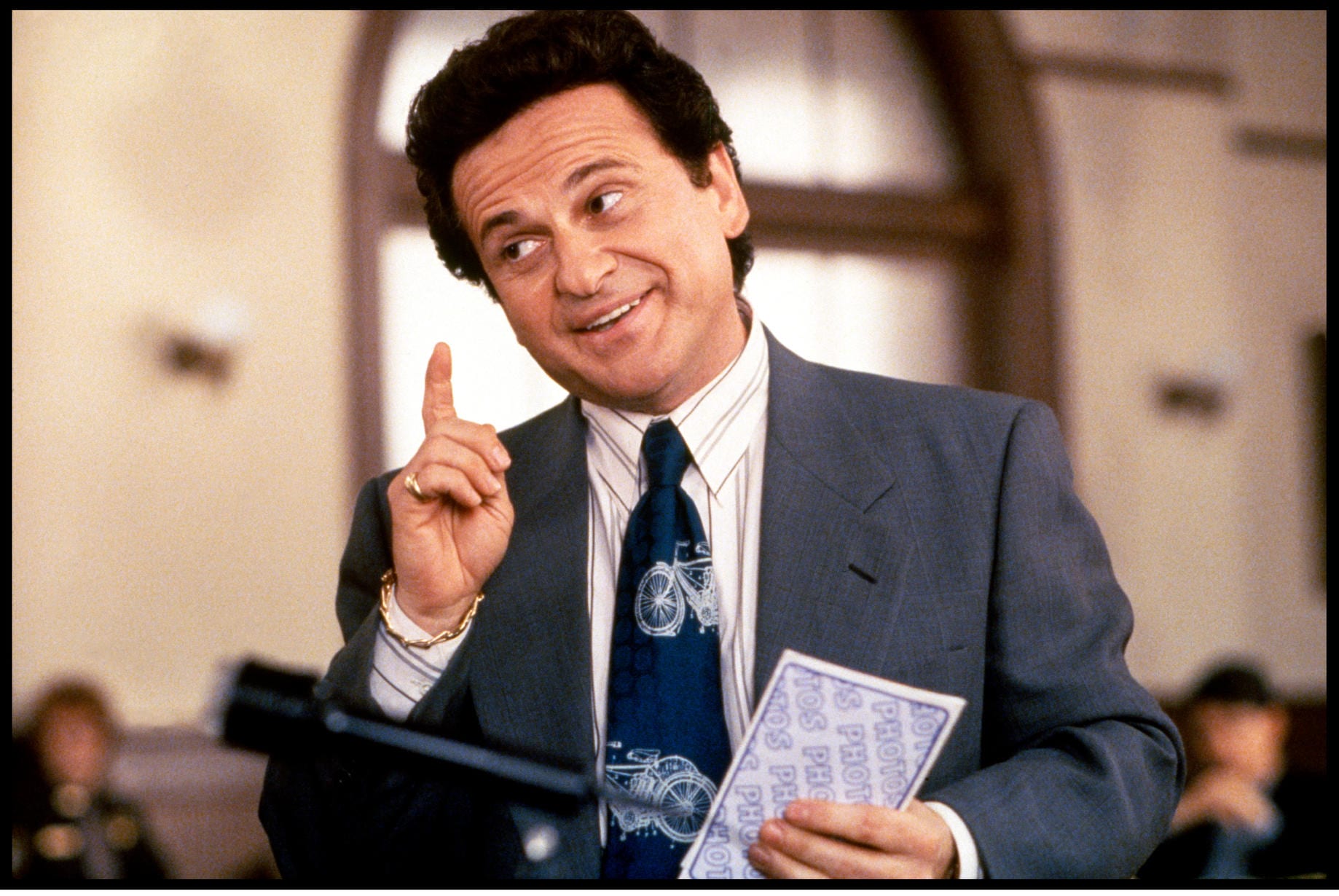 In his fine book Impeachment: A Citizen’s Guide (2017), Harvard Law School Professor Cass R. Sunstein, a prominent Democrat who served in the Obama White House, stresses a key point about impeachment: grounds for impeachment should be neutral in the sense that we would be willing to apply them equally to politicians with whom we agree as well as those whom we despise.

A general principle of law, enshrined among other places in the 14th Amendment, is that norms are valid only if we are willing to apply them to everyone; that’s why the statue of Justice is blind. Professor Sunstein is right, however, that the neutrality test is particularly important for impeachment, because the constitutional standard is necessarily vague and turns on judgments such as whether or not misdeeds are sufficiently serious to justify removal from office.

If we would not be willing to apply the same rule to someone with whom we agree politically, we should doubt whether it is a valid basis to kick someone out of office with whom we disagree. Or, in the immortal words of Vinny, the homespun legal philosopher in the movie My Cousin Vinny, “It won’t hold water” to say that something is an impeachable offense when the other side’s guy does it but it is perfectly okay when our own guy does essentially the same thing.

Joe Biden has admitted to doing almost exactly what the House Democrats accuse President Trump of doing in their impeachment inquiry: using his position in government to obtain private political benefit from a foreign government. We should all be asking, “Why isn’t Biden also the target of a second impeachment inquiry?”

Some people might think that is because Biden has left office, but according to both William Murphy, professor of American History at the State University of New York, and every other expert I know who has addressed the issue, former officials like Biden may also be impeached after they leave office. Impeaching a former official is not a meaningless gesture because impeachment may prohibit someone from holding office in the future, including the presidency in Biden’s case; in the words of the Constitution, impeachment may disqualify a person “to hold and enjoy any Office of honor, Trust or Profit under the United States.”

As vice president, Joe Biden threatened to hold up a billion dollars in aid to Ukraine unless that country fired a prosecutor who was investigating Burisma, the energy company that was paying his son $600,000 a year to serve on its board of directors. All these facts are detailed here and don’t need to be repeated. There is no dispute about them. You can even watch Biden on YouTube bragging to the Council on Foreign Relations that he did it: “I looked at them and said, ‘I’m leaving in six hours. If the prosecutor [Shokin] is not fired, you’re not getting the money [a $1 billion loan guarantee].’ Well, son of a b-tch.… He got fired.”

As a result, the investigation of Burisma was suspended, at least until Trump tried to get it restarted, a move for which the Dems want to impeach him.

Despite the eerie similarity of Biden’s actions to those that are supposed to constitute “high crimes and misdemeanors” warranting the impeachment of President Trump, Biden and his supporters dare anyone to find anything illegal in his use of his official position to threaten to withhold aid to Ukraine unless it stifled a criminal investigation of his son’s company.

I think I have solved that riddle. An Office of Government Ethics regulation prohibits all government employees from using their offices “for the private gain of friends, relatives, or persons with whom the employee is affiliated in a nongovernmental capacity.” That would seem to be directly on point, but alas, the definition of government “employees” to which the regulation applies specifically excludes the president and vice president. That exclusion is apparently because the president and vice president are subject to impeachment, which is likely the exclusive constitutional remedy for their misdeeds while in office.

Unless a majority of the House is willing to investigate impeaching former Vice President Biden for doing something very similar to what they want to impeach President Trump for doing, we should all question the legitimacy of the impeachment inquiry against President Trump as partisan and one-sided.

Admittedly, there are distinctions between what Biden did and what Trump did. Trump was trying to restart an investigation by a foreign government into plausible violations of its laws, but what Trump asked for never actually happened. Biden, on the other hand, successfully killed an investigation into possible violations of Ukrainian and U.S. laws against bribery by Burisma.  Biden appears to have misused his government position to obstruct the criminal justice system of another country so that an ongoing investigation would not embarrass him politically, whereas Trump is accused of trying to induce a foreign country to interfere in our elections by making information about those misdeeds by his rival public.

Arguably what Biden did was worse, but both come within the same theory that abusing governmental power for private political gain is an impeachable offense. The Democrats base their impeachment inquiry against Trump on the legal theory that threatening to withhold aid as a quid pro quo to get a foreign government to investigate a political rival is an illegal campaign contribution and an abuse of power. Why wouldn’t Biden using his official position to withhold aid as a quid pro quo for obstructing an ongoing criminal investigation that might embarrass him as a political candidate in the future also satisfy the same test?

The president may have a defense that would not apply to Biden, however. Article II, section 3, of the Constitution specifically obliges that the president “shall take Care that the Laws be faithfully executed.” There is a strong argument that the president’s constitutional “take Care” obligation could include urging a foreign government to investigate a suspected violation of law by an American citizen when the evidence is uniquely within that government’s possession even if it might also benefit the president politically. Biden did not become immune from investigation by running for president, although he may be immune from impeachment because he is a Democrat.

In an interview with the New York Times that has not gotten the attention it deserves, Hillary Clinton assures us that she can read President Trump’s mind — “I do live rent-free in Donald Trump’s head” — and “he could care less about corruption in Ukraine. What he wants is dirt on Joe Biden, whether it is real or not.” I would have thought that mind-reading by a defeated presidential candidate about her former opponent’s motivations would not be a sufficient basis on which to impeach, but passing that, in the even more revealing part of the interview, Hillary concedes that it would have been perfectly legitimate for the president to urge the Ukrainians to investigate corruption if only he had gone about it in a different way with more involvement by the career government staff.  Hillary imagines how she would have done it:

“President Zelensky, we know that you’re new to the job, you just got there, but you need to know the United States wants to support you, wants to help defend you against continuing Russian aggression, but we are worried that unless you tackle the corruption in your own country, anything we give to you will not be put to the best use and will not produce the best results, so we’re going to send a team over to sit with you and your entirely new cabinet,” — because these people have never been in politics before. “We’re going to walk through with you some of the best practices for dealing with corruption and we’re going to ask you to provide any information that in any way would suggest that America could do more to help you.”

Right, Hillary, tell President Zelensky that he doesn’t know how to run his country, so we are going to send over our career professionals to instruct him on “best practices.” That would have made it all legal.

What Trump did was to ask a foreign government to investigate a potentially impeachable offense by a political rival. That’s the real issue underlying the current impeachment debate. The Democrats and their media allies want to cover that up by calling it “dirt” or a “smear,” but the correct term for what Biden did, and what Trump wanted Ukraine to investigate, is a potentially impeachable offense by Biden that may also have been a violation of foreign and U.S. bribery laws by Burisma.

For the current impeachment inquiry to be regarded as fair by the American people and by history, we would either have to be willing to open a second impeachment inquiry into whether Joe Biden committed impeachable offenses as vice president or drop the one against President Trump. Fairness demands that we apply the same standards to both Biden and Trump.