by R. Emmett Tyrrell, Jr.
On a visit to Bagram Air Field in Afghanistan on January 12, 2011 (Creative Commons) 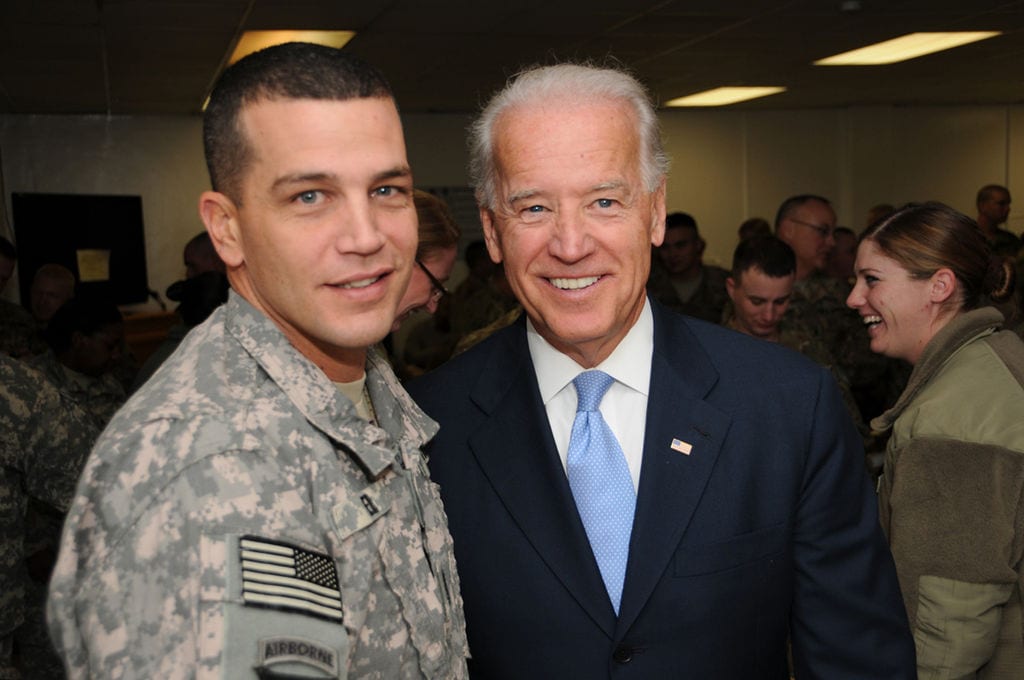 Recently in Hanover, New Hampshire, former Vice President Joe Biden — the gaffable Joe Biden — stitched together a stupendous concatenation of gaffes that ought to put him out of the race for the Democratic nomination. But apparently it will not.

This is good news for those of us who like a good laugh or a whole string of good laughs. If Joe makes it to the Democratic nomination after surpassing Beto, Pocahontas, Crazy Bernie, and all the others, the 2020 election will be the most entertaining in American history, and then President Donald Trump can get back to ministering to the economy, the courts, and affairs of state. Yet, first savor Joe’s Hanover masterpiece. It apparently will be the first of many. The mainstream media is urging him on.

In Hanover Biden said that at the request of a four-star general he, when he was vice president, had traveled to Kunar, a dangerous province in Afghanistan, to pin a medal on the chest of a heroic Navy captain. The Navy captain, Biden recalled, had rappelled down a ravine under enemy fire and brought out the body of an American serviceman. The general wanted the vice president to fly to the dangerous province and pin a Silver Star on the captain, despite the captain’s complaint that he was unworthy of the award. Biden even summoned up the hero’s words from memory’s well: “Sir, I don’t want the damn thing…. He (the captain’s fallen comrade) died. He died.” And Biden added to the agog New Hampshire audience, “This is the God’s truth.” According to the Washington Post, he even swore, “My word as a Biden.” It was apparently a very emotional moment.

The problem is that, as the Washington Post found out, practically every detail in Biden’s histrionic rendition of the event was wrong. Biden visited Kunar province as a U.S. senator, not as vice president. The soldier who performed the act of heroism was a 20-year-old Army specialist, not a captain in the Navy. Finally, the soldier, Kyle J. White, never had a medal pinned on him by Biden. He got his award six years later from President Barack Obama, and, oh yes, it was a Congressional Medal of Honor, not a Silver Star. Congratulations, Kyle, but remember you only have earned one more Congressional Medal of Honor than Joe.

As the Post reports, “In the space of three minutes, Biden got the time period, the location, the heroic act, the type of medal, the military branch and the rank of the recipient wrong, as well as his own role in the ceremony.” As I have mentioned above, this gaffe is truly stupendous. It goes even beyond Senator Elizabeth Warren’s repeated tales of being an American Indian or of any of the other phonies seeking the Democratic nomination. It is a world record, if world records for such BS are kept. And now we are told the press is encouraging further theatrics from him.

What is Joe’s response? I would say he chose nonchalance. Said the gaffable one, “I was making the point how courageous these people are, how incredible they are, this generation of warriors, these fallen angels we’ve lost.” And he continued, “I don’t know what the problem is. What is it that I said wrong?” Well, Joe, my answer to your question is: EVERYTHING. You got EVERYTHING wrong.

There is Pocahontas, who made a career based on her phony claims to being a Native American, and Harvard accepted her claims. Why? Because the claims helped Harvard to meet a minority goal. There is the millionaire socialist, Bernie Sanders, who has a carbon footprint that includes three homes and a wife who bankrupted a college she oversaw. There is the Irish kid from Texas who claims the Hispanic-sounding name of “Beto,” though it is really Robert Francis O’Rourke. There is the mayor of South Bend, whose marriage to a man is now seen as a shrewd political move, and there are those candidates who throw the term “racist” around with abandon. They call themselves people of color, though upon second glance they might more properly be called people of shades.

They are all phonies, and now the New York Times’ house “conservative” has leaped to gaffable Joe’s defense. On the PBS NewsHour last week, David Brooks acknowledged that Joe might “embellish” his speeches, “But he’s not mendacious. He’s not irresponsible.” No, David, if Joe is not mendacious and not irresponsible, perhaps he is delusional? Maybe he can claim he is suffering Delusions of Candor.