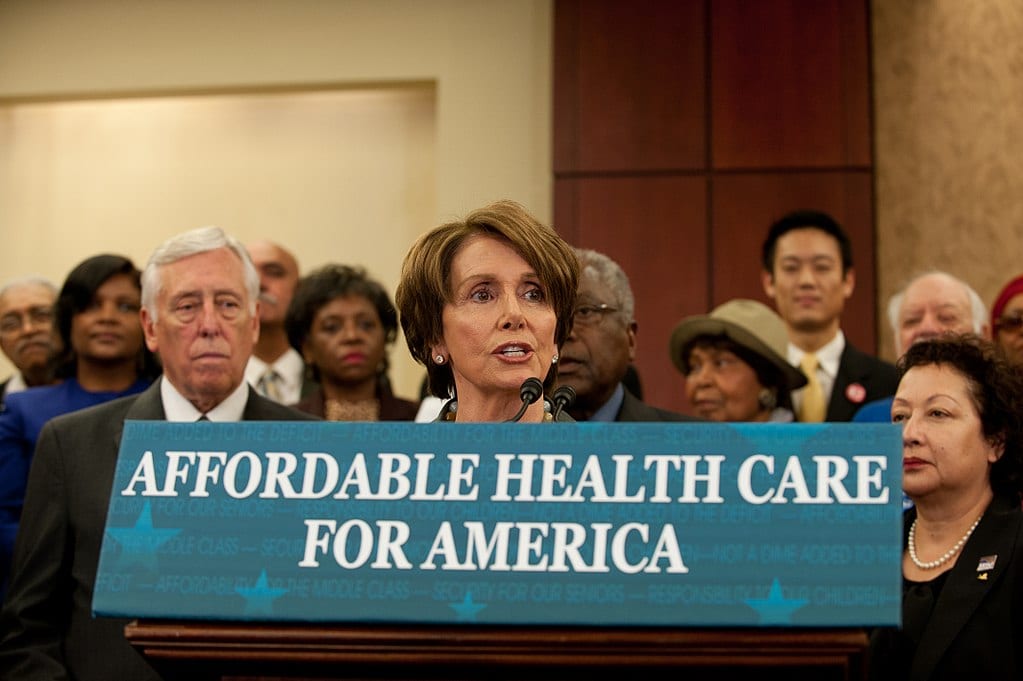 One day after Nancy Pelosi and her modest but all too real Democratic majority in the House of Representatives voted to interfere in Texas v. United States, the lawsuit in which Federal Judge Reed O’Connor ruled Obamacare unconstitutional, a new survey found that nearly six in ten registered voters want O’Connor’s ruling to stand. Of that number, 27% say the law should be eliminated so we can return to the way things were before Obamacare was shoved down our unwilling throats, and 31% agree that it should be invalidated so it can be replaced by a program that works.

The Hill reports that 58% want to let Obamacare die. Yet Pelosi and her accomplices plan to ignore the will of the voters — yet again — to save a statute that has been a failure by every rational measure. For example, a study recently published in the Journal of the American Medical Association (JAMA) suggests that it has increased mortality rates. Obamacare imposed arbitrary readmission rules known as the Hospital Readmissions Reduction Program (HRRP) for Medicare hospitalizations, and the number of patients dying within a month of discharge has increased:

In this retrospective cohort study that included approximately 8 million Medicare beneficiary fee-for-service hospitalizations from 2005 to 2015, implementation of the HRRP was associated with a significant increase in trends in 30-day post-discharge mortality among beneficiaries hospitalized for heart failure and pneumonia.

Nonetheless, Pelosi’s newly-minted House majority and 17 Democrat-controlled states led by California AG Xavier Becerra are planning to send an army of lawyers to the Fifth Circuit Court of Appeals in an effort to overturn Judge O’Connor’s ruling. If the Fifth Circuit upholds O’Connor’s ruling, the case may find its way back to the Supreme Court. The Court is no doubt sick of hearing about this pig’s breakfast, but it usually takes up such cases when there is a split between two or more appeals courts. That may be what we’ll get regarding the mandate’s “severability.”

Judge O’Connor is by no means the first to strike down Obamacare pursuant to the justly reviled individual mandate. In 2011, U.S. District Judge Roger Vinson ruled the mandate invalid and, like O’Connor, struck down the rest of the law because the two were not in his opinion severable. This ruling was partially overturned when the Eleventh Circuit Court of Appeals struck down the individual mandate, but held that the provision was severable from the rest of the law. Judge O’Connor gave his view on the severability question in his December 30 summary:

Judge O’Connor went on to point out, “Congress included a severability clause for Medicaid Expansion but not for the Individual Mandate.” The former enabled the Court to strike down the law’s outrageous Medicaid diktat without endangering the entire statute. But the presence of a severability clause in the Medicaid provision, combined with the conspicuous dearth of any such clause in that which imposed the individual mandate, renders it blindingly obvious that the people who drafted the “Affordable Care Act” knew exactly what they were doing when they left it out.

Why? It was, as the Democrats who passed it, the government lawyers who defended it, and people like Ezekiel Emanuel who pimped it, have all said at one time or another — essential to the proper functioning of the whole hare-brained scheme. The obvious point of Obamacare was income redistribution, the transfer of income from young and healthy individuals to old and sick individuals. The penalty associated with the mandate was deliberately set low in the beginning in the vain hope that everyone would simply accept it. The intention was always to raise it dramatically.

This is why Nancy Pelosi and her co-conspirators at the state level will do everything in their power to save Obamacare, including the individual mandate. Their long-term plan is to get control of both houses of Congress and the White House. If the individual mandate is still a part of Obamacare when that happens, they will raise the tax-penalty to an amount equal to the cost of the most expensive Obamacare plan. They will increase the “tax-penalty” from zero to a figure well in excess of $10,000 annually. This, they know, will drive individuals back to the exchanges.

Thus, Obamacare pimps insist that the GOP’s elimination of the fine for failing to buy insurance “repealed the mandate… for all practical purposes.” But it didn’t. As long as the law exists, and the individual mandate lurks in the shadows, millions of Americans are at real financial risk. And, despite what people like Jonathan Gruber believe, the voters aren’t stupid. Otherwise, they wouldn’t have rejected a crook like Hillary Clinton, they wouldn’t have elected Donald Trump, and they wouldn’t back Federal Judge Reed O’Connor on the need to kill Obamacare.