One key question in considering demand-side economic policies, such as fiscal stimulus and other deficit spending, is whether the elevated unemployment rate is a product of cyclical or structural forces. If unemployment is cyclical, then boosting aggregate demand would mean that employers would re-hire workers earlier and save the economy a lot of pain. If it’s structural, though, meaning that the economy is undergoing significant changes and there is now a substantial mismatch between workers’ skills and the kinds of skills needed throughout the economy, measures aimed at increasing short-term demand might not do much to help out the unemployed.

In 2003 the NY Fed published a paper examining whether the 1990-91 and 2001 “jobless recoveries” were caused by structural factors. The authors, Erica Groshen and Simon Potter, found evidence that these recessions, compared to past recessions, featured more “permanent relocation” of workers among industries. In other words, when the recessions were over and recovery had taken place, more industries were net gainers or losers of employment. Some industries were left permanently smaller than they were before the recession, meaning that workers couldn’t return to those sectors even when demand and GDP had recovered.

Menbere Shiferaw and John Robertson, economists at the Atlanta Fed, have replicated one of Groshen and Potter’s key graphs depicting unemployment in the 2001 recession: 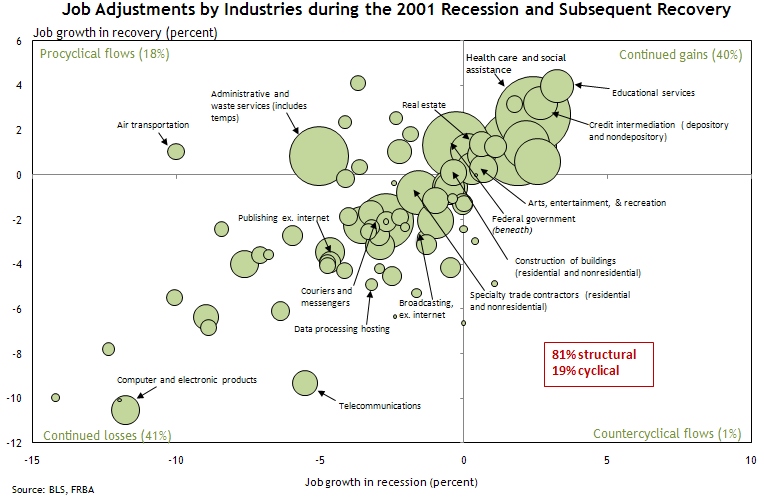 They write, “We replicated Groshen and Potter’s work with minor data definitional changes and find that for the first 12 months of recovery from the 2001 recession 81 percent of employment was in industries continuing recession employment trends (the top right and bottom left quadrants in the chart).”

Shiferaw and Robertson used the same approach to look at the data from the past recession and recovery, assuming that the recession ended in June of 2009. 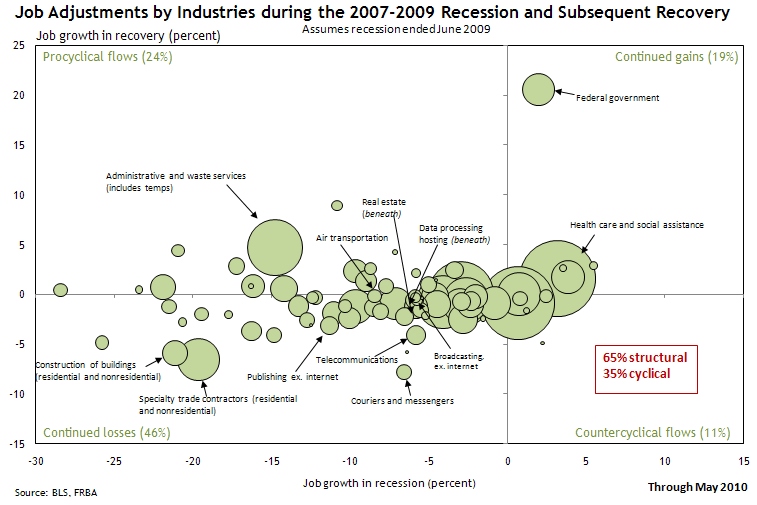 The one outlier in the top right corner, if you can’t make it out, is the “federal government” industry. It gained jobs during the recession and has gained jobs far faster than any other industry during the recovery.