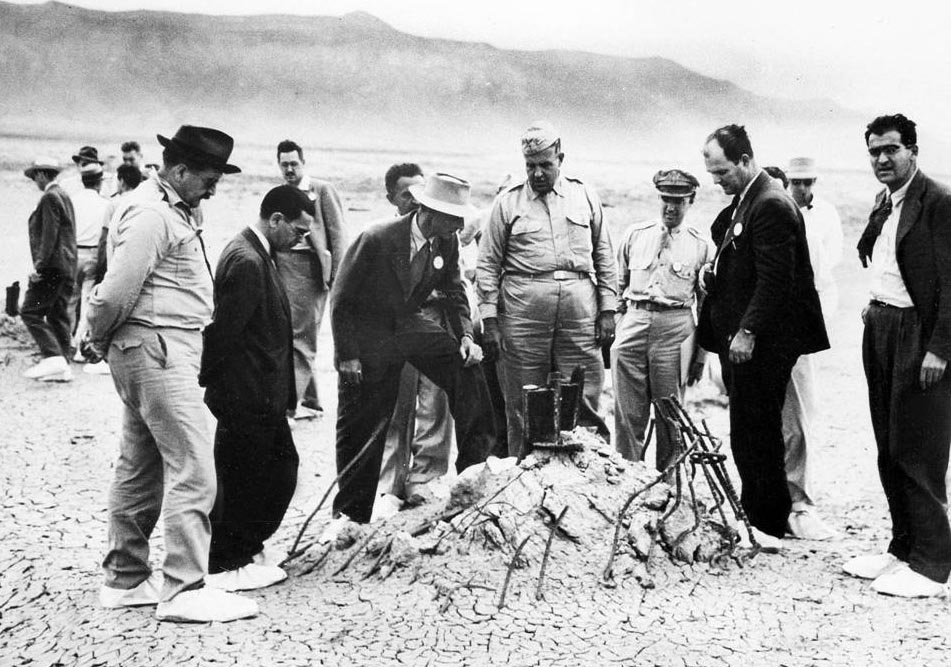 What did Jennifer Granholm do for an encore after entrusting a cross-dressing alleged baggage-claim thief with 100 employees and a $45 million budget?

The secretary of energy with much hoopla vacated a 68-year-old decision by a 47-years-defunct commission regarding a 55-years-dead scientist. In a year in which fuel prices reached their highest mark ever, highlighting an alleged past injustice tends to distract from the confirmed present catastrophe. It certainly does nothing for the scientist who died before the Beatles broke up.

In 1954, the Atomic Energy Commission (AEC) rightfully revoked the security clearance of J. Robert Oppenheimer, the father of the atomic bomb.

Granholm’s order vacating the revocation of Oppenheimer’s security clearance states: “In his years of public service, Dr. Oppenheimer had perhaps more access to information about U.S. nuclear weapons programs than any other individual in the government. And yet, in reaching its decision on his clearance, the AEC did not claim that Dr. Oppenheimer had ever divulged or mishandled classified information. Nor did it question his loyalty to the United States.”

Much evidence contradicting this claim exists. But more importantly, Granholm’s claim lacks relevance. The Atomic Energy Commission did not question Oppenheimer’s loyalty. They should have explored that question. They didn’t. They designated him a security risk. The federal government made a distinction between loyalty and security cases. While debate exists as to whether Oppenheimer represented a loyalty risk, the case closed long ago on whether to regard him as a security risk.

The Communists in his life included his wife, his mistress, his brother, his sister-in-law, his landlady, and numerous friends. He hosted Communist fundraisers and donated thousands of dollars to the Communist Party USA.

As Oppenheimer admitted to the commission, “I contributed to the strike fund of one of the major strikes of [Communist Party union leader Harry] Bridges’ union; I subscribed to the People’s World; I contributed to the various committees and organizations which were intended to help the Spanish Loyalist cause.”

Communists, he belatedly admitted, approached him about handing over sensitive information.

“I said that [George] Eltenton had attempted, through intermediaries, to approach people on the project, though I mentioned neither myself nor [Haakon] Chevalier,” Oppenheimer recalled of his dealings with spies during the 1940s. “Later, when General [Leslie] Groves urged me to give the details, I told him of my conversation with Chevalier. I still think of Chevalier as a friend.”

READ MORE from Daniel J. Flynn: Don’t Blame Sam Brinton, They Did It

By the time of the revocation of Oppenheimer’s security clearance in 1954, four years had passed since the arrests of Communists on both sides of the Atlantic for engaging in a massive, successful effort to pass atomic secrets to the last man on Earth worth entrusting them to: Joseph Stalin. That apparatus included scientists working on the project and recruiters, such as Chevalier, seeking to goad them into revealing the deepest of state secrets. Many of them, including Ted Hall, escaped punishment. Some scholars and government officials regarded Oppenheimer as one who committed great crimes with impunity.

Pavel Sudoplatov, the Soviet spymaster in charge of the successful plot to assassinate Leon Trotsky, claimed in his memoir that Oppenheimer supplied, along with other scientists, the Soviet Union with crucial information for it to successfully test its own atomic bomb in 1949. He recounts Oppenheimer’s involvement in detail, which included allowing moles access to secret data to copy it, and describes him as “knowingly part of the scheme.”

An Oct. 2, 1944, memo from the Soviet archives, signed in receipt by chief of secret police Lavrentiy Beria, identifies Oppenheimer as a “member of the apparatus of Comrade [American Communist leader Earl] Browder” who “provided cooperation in access to research for several of our tested sources including a relative of Comrade Browder.”

The decrypted intercepts of the Venona project include references to Oppenheimer curiously under a codename. One from March 1945 instructs Soviet agents to “re-establish contact with ‘Veskel’ … as soon as possible.” Veskel, the National Security Agency determined conclusively, referred to Oppenheimer. Herb Romerstein and Eric Breindel wrote in The Venona Secrets: “In May [of 1945] the Rezidentura sent Moscow another report from Hall on atom bomb research. It revealed the locations of work being done and the names of the heads of each research group. All of the names were clearly written out except one, that of J. Robert Oppenheimer, who was listed as ‘Veskel,’ the head of Los Alamos.”

The evidence overwhelmingly supports the AEC stripping Oppenheimer of his security clearance. The body, which likely did not possess any of the information here suggesting perfidy, did not go so far as to question Oppenheimer’s loyalty. They examined the narrower question of security. They essentially concluded that in the drive to develop the devastating weapon to win the war, the government looked the other way at Oppenheimer’s loathsome associates and beliefs because of his profound expertise. One understands that rationale in 1944; by 1954, it seems senseless.

Granholm’s press release refers to a “flawed process.” The actual order, after trashing the methods used to revoke Oppenheimer’s clearance, tellingly refuses to question whether he fit the designation.

“The question of whether Dr. Oppenheimer, or any other individual of that time, ought to have been eligible for access to restricted data is not one that this Department can or should attempt to answer seventy years later,” Granholm states near the end of the document. “Security clearance adjudication proceedings necessarily depend on sensitive judgments regarding the credibility of oral testimony and other evidence best evaluated within its own context. Therefore, we will not reconsider the substantive merits of In the Matter of J. Robert Oppenheimer.”

Translation? Even Jennifer Granholm knows that allowing J. Robert Oppenheimer to handle government secrets amounted to a security risk (and allowing the “destroyer of worlds” to do so also brought with it great rewards).

Oppenheimer in 1954 himself acknowledged of his war-era behavior that “I might well have appeared at the time as quite close to the Communist Party — perhaps even to some people as belonging to it.”