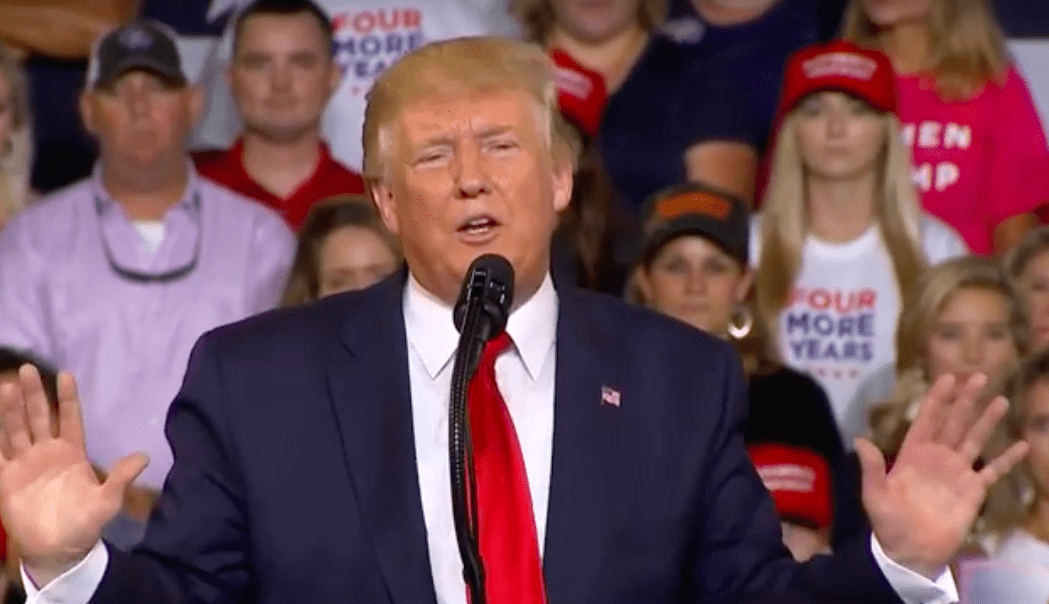 The most revealing moment of Wednesday night’s Greenville, North Carolina, Trump rally was not when the crowd chanted “Send her back” in support of President Donald Trump’s criticism of first-term Rep. Ilhan Omar, D-Minn., a Somali-born immigrant who frequently calls Trump a racist and whom Trump argues hates America.

Trump later told reporters he “felt a little badly about” the chant and “would certainly try” to stop supporters from repeating the refrain at future rallies — which I take as recognition that his go-back rhetoric against Omar and three female American-born House Democrats could endanger his reelection campaign.

The big reveal occurred some 50 minutes later when Trump recalled running into a highly successful businessman who “cannot stand me” — a disregard Trump returned in kind. Trump told the rally that he said to the man, “I never have liked you, and you have never liked me. But you’re going to support me because you’re a rich guy.”

Trump added, “But it’s not like he has a choice. He has no choice. And on top of that, it’s a good choice because we’ve done the right thing.”

It was a stark admission that Trump enjoyed holding mainstream Republicans hostage because 2020 Democratic hopefuls are so far to the left that conservatives who don’t like his Twitter rants have nowhere to go. A friend calls Trump’s latest Twitter campaign “torturing the moderates.” And she voted for Trump.

This latest Trump melodrama began Sunday when Trump tweeted that the four progressive Dems known as “the Squad” — Reps. Omar, Rashida Tlaib of Michigan, Alexandria Ocasio-Cortez of New York, and Ayanna Pressley of Massachusetts — should “go back and help fix the totally broken and crime-infested places from which they came.”

The reaction of many Republicans was a prolonged cringe. Not because they demand political correctness but because they are aware how the go-back rhetoric is likely to alienate some of the very Latino and women voters the campaign has been courting. It didn’t help that three members of the Squad are native-born Americans who are also women of color.

Democrats and Never-Trumper scolds could not get on Twitter fast enough to denounce as unprincipled and cowardly any Republicans who did not turn completely against Trump for his race-baiting rhetoric.

A number of conservatives did voice their disapproval on social media and through back channels. But they aren’t going to defect; they support what Trump does even as they abhor what he says.

They love his judicial picks, agree with him on border security, and benefit from the strong economy. They believe that if a Democrat takes the White House, he or she will pack the courts with activist judges who will legislate from the bench, neuter or eliminate Immigration and Customs Enforcement (ICE), and push soak-the-rich taxes likely to fell a strong economy.

Besides, the Right believes the Left pays too much attention to words and bestows too little attention on results.

It doesn’t say much for Trump that he repeatedly and unnecessarily forces the very people he needs to get things done to bite their tongues because he cannot control his. And Wednesday night, he pretty much admitted he likes it that way.

The Trump amen chorus predictably dismissed all criticism of the “send her back” chant as Trump-hater folly. There’s a big hole in that argument: Trump threw the chanters under the bus. He knew it was election poison, so how could it be wrong for others to say it was toxic?

On Friday, Trump walked back his walk-back as he told reporters the Greenville attendees were “incredible patriots” and that he was incensed at Omar’s anti-Semitism.

Trump’s right about Omar. She has tweeted that support for Israel was “all about the Benjamins” and questioned pro-Israel officeholders for their “allegiance to a foreign country.” She so enraged House Democrats that they voted on a resolution to censure anti-Semitism, a measure they then watered down as a resolution against “hateful expressions of intolerance” to mollify the squad.

Tuesday, she introduced a resolution “affirming that all Americans have the right to participate in boycotts in pursuit of civil and human rights at home and abroad” — an apparent gesture of support for the Boycott, Divestment, and Sanctions (BDS) movement against Israel.

But rather than simply confront her on the issues, where she is vulnerable, Trump the bully chose to make it personal. And so America spent another week arguing about his unnecessary roughness.

There was an apparent strategy behind Trump’s go-back tweet. Team Trump is focused on turning out Trump’s 2016 voters who skipped the midterm elections, GOP organizers believe, because Trump’s name was not on the ticket.

For that rump, Trump has put reliable GOP voters through an agonizing slog. They’ve been put on the spot routinely while they have been taken for granted because they are committed Republicans. But it’s getting old, and it’s time for Team Trump to wonder: What if they’re the voters who decide to stay home?