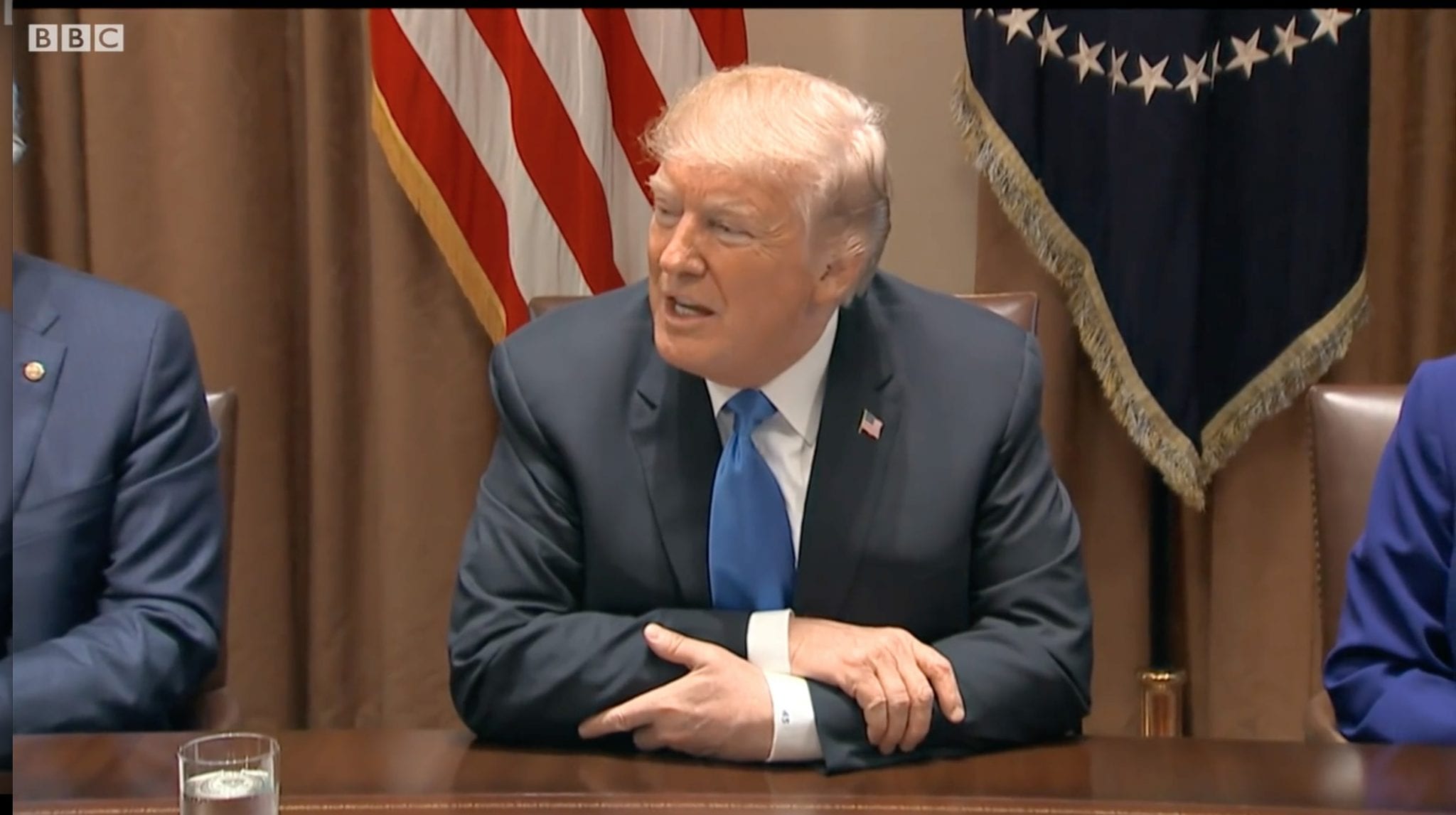 During a February White House discussion on school safety, President Donald Trump singled out Sen. Pat Toomey, R-Pa., for not including a provision to raise the legal age to buy a long gun from 18 to 21 in a bill the senator had sponsored. “You know why?” Trump schooled Toomey, “because you’re afraid of the NRA, right?”

Monday, Trump saw his own words thrown back at him after the White House released a list of actions to improve school safety that does not include raising the legal age to purchase a long gun — a measure opposed by the National Rifle Association.

Trump had signaled his willingness to consider an increase in the age for legal purchases of long guns in response to the mass shooting at a Parkland, Florida, high school that left 17 dead. Such a rule could have prevented the 19-year-old shooter from buying the AR-15 he turned on students and teachers.

Instead, the White House action sheet calls for a federal commission on school safety to be chaired by Education Secretary Betsy DeVos that will make recommendations in a number of areas, including “age restrictions for certain firearm purchases.”

But the action sheet did not indicate a specific age, such as 21, or stipulate which firearms a different age would apply to.

The administration also pledged to help states pay for firearms training for teachers and reiterated its call to improve the background check and mental health systems. However, the White House did not include the language from Toomey’s 2013 bill to expand background checks for gun shows and online sales.

Democrats were quick to pounce on Trump’s apparent retreat.

“After signaling… (that) he would be for raising the age of purchase for assault weapons from 18 to 21, a modest measure, President Trump backed off — saying he would leave it to the states and the courts to decide,” Senate Minority Leader Chuck Schumer railed.

“That’s a cop-out, and we know that,” he added. “After indicating support for universal background checks, President Trump makes no mention of closing the dangerous gun show loophole or internet sales loophole.”

A Sunday night tweet showed Trump moving away from his February statements: “On 18 to 21 Age Limits, watching court cases and rulings before acting. States are making this decision. Things are moving rapidly on this, but not much political support (to put it mildly).”

Asked Monday if there is anything in the action plan that the NRA does not like, White House Press Secretary Sarah Sanders responded that an age-limit increase is on the list of ideas that “will be reviewed” to see if they are best done on a federal or a state-by-state basis.

Sanders also told reporters that Trump “hasn’t backed away from these things at all.” Instead, the White House is “focused on things that (they) can do immediately.”

On March 9, Florida Gov. Rick Scott signed a bill that raised the legal age to buy a long gun in the state to 21, banned bump stock devices and extended the three-day waiting period for gun purchases to include long guns. It also would allow some teachers to carry guns.

“Today should serve as an example to the entire country that government can — and must — move fast,” Scott said.

The NRA filed a lawsuit against Florida that same day. “Florida’s ban is an affront to the Second Amendment, as it totally eviscerates the right of law-abiding adults between the ages of 18 and 21 to keep and bear arms,” the NRA said in a statement.

The day before the meeting with Toomey and other lawmakers, Trump told a group he had lunch with top NRA officials. “If (the NRA is) not with you, we have to fight them every once in a while,” he said. “That’s OK.”

The legal age of purchase is not as clear-cut as the recent debate suggests. Individuals ages 18-20 may purchase rifles and shotguns from a federally licensed firearms dealer, but not handguns. It also is legal for individuals ages 18-20 to possess handguns and long guns and to purchase them from unlicensed dealers.

“The only thing you cannot do at age 18 is purchase a handgun from an FFL,” or federal firearms licensed dealer, noted Ken Klukowski, an attorney with the American Civil Rights Union who used to work for the NRA.

Klukowski said he thinks Trump instinctively supports the Second Amendment, but he “starts a public discussion by just expressing out loud his initial thoughts on a matter” — thoughts that in past White Houses “would be run through layers of vetting before anything was said publicly.”