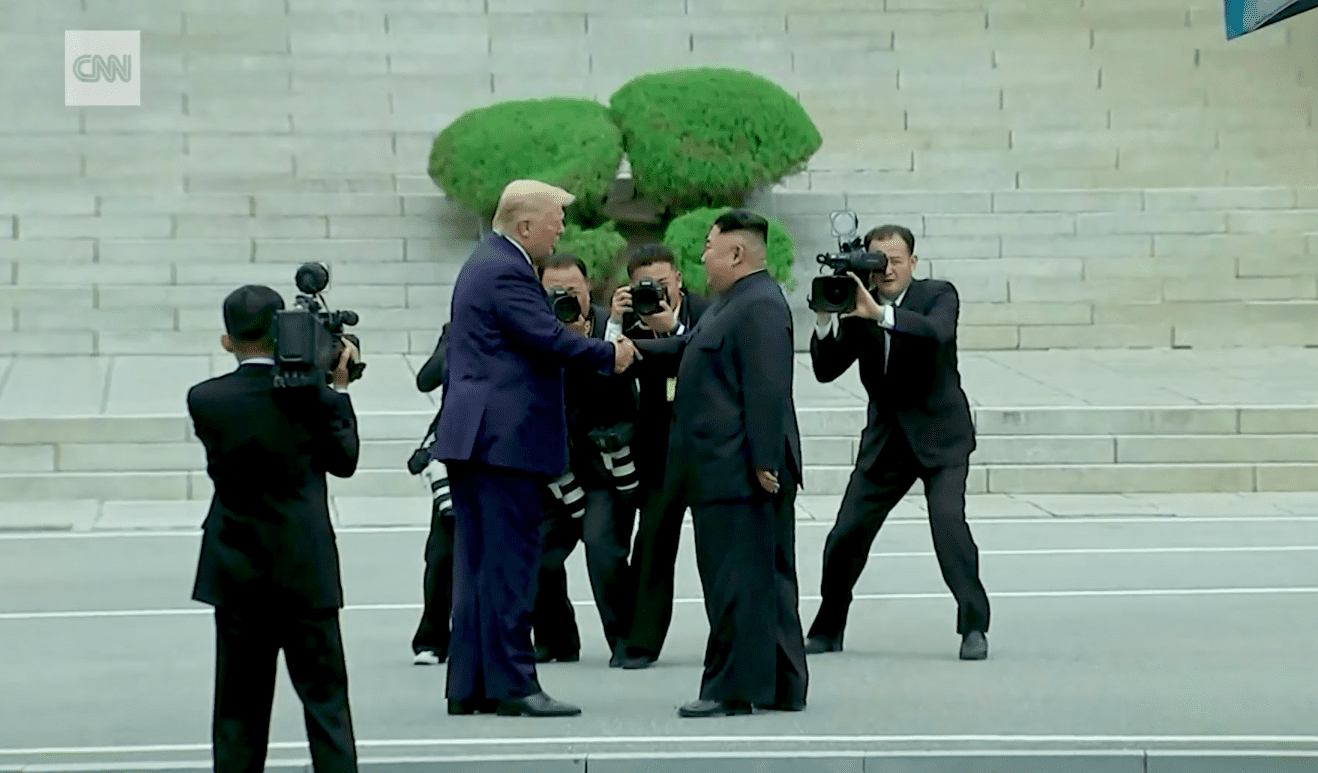 President Donald Trump shocked much of the world with an impromptu meeting (his third since becoming president) with North Korea’s leader Kim Jong-un as part of his recent scheduled visit to the Korean Peninsula’s demilitarized zone (DMZ), where he became the first U.S. presiding president to actually set foot into that isolated and dangerous country. His bold and historic spontaneous diplomatic move drew praise and criticism. Most importantly, it stands to restart stalled talks between the countries aimed at eliminating North Korea’s nuclear program and forging a peace deal between North and South Korea that are 66 years in the making. A successful outcome will not only benefit the Korean Peninsula people, but also the region and the world.

The two leaders previously met in Singapore in June 2018 and Hanoi in February 2019. But those talks reportedly stalled in Hanoi after Kim wanted nearly all economic sanctions removed for the closure of important nuclear sites, while Trump wanted North Korea to completely dismantle its nuclear arsenal before lifting any financial penalties by the U.S. and international community. As of May 2019, the American Federation of Scientists estimated North Korea’s rising nuclear arsenal totaled between 20 and 30 weapons. And while a 1953 Armistice Agreement ended major Korean War hostilities and created the DMZ, there hasn’t been a formal peace treaty ending the war.

South Korea’s president, Moon Jae-in — who earlier suggested President Trump deserves a Nobel Peace Prize for his North Korea peace initiative — praised Trump’s creative and bold approach, telling him, “you actually presented a big hope to everyone, in particular the Korean people here”; Japan’s prime minister, Shinzo Abe, said he supports Trump’s efforts to achieve full denuclearization of North Korea and hopes to also meet “without conditions” with Kim to resolve bilateral issues; and Pope Francis – often a Trump critic — greeted the Trump-Kim meeting as a “significant gesture” constituting a further step on the path of peace not only on the peninsula but also in favor of the whole world.

Some of President Trump’s political opponents from the opposing Democrat Party, however, seeking to deny him another term in office in 2020, criticized the meeting. Former Vice President Joe Biden’s presidential campaign spokesman, Andrew Bates, accused Trump of “fawning” over Kim; Senator Bernie Sanders said “we need real diplomacy, not just a photo opportunity”; Senator Amy Klobuchar said Trump has a history of holding summits with foreign leaders in which “nothing really comes out of it”; and former U.S. Representative Beto O’Rourke described Trump’s foreign policy as “bizarre.”

It’s notable that since the first Trump-Kim meeting, North Korea hasn’t, among other things, tested any nuclear weapons or conducted any long-range ballistic missile tests. Before then, the rogue regime claimed it detonated its sixth nuclear test (first hydrogen bomb) and reportedly tested 20 missiles, some endangering its South Korean and Japanese neighbors. North Korea has also reportedly illegally shipped weapons of mass destruction technology to dangerous places like Iran, Libya, Pakistan, Syria, and Yemen over the years.

Given the huge publicity surrounding the most recent Trump-Kim meetings, many Americans and others might want to consider what North Korea is really like and examine the colossal U.S. and international community policy failures over the past several decades while they unsuccessfully attempted to harness North Korea’s nuclear development program before those meetings began.

This country of 25 million people is located on the Korean Peninsula and shares borders with China, Russia, and South Korea. It is one of the most isolated and belligerent nations on earth, propped up by Russia and China in the UN Security Council. China accounts for three-quarters of its imports and exports and is the ultimate guarantor of the regime’s existence.

Since 1948, North Korea has been ruled by the Kim family dynasty (Kim Il-sung, his son Kim Jong-il, and his grandson Kim Jong-un). The family was installed into power courtesy of the Soviet Union’s communist dictator and documented mass murderer Joseph Stalin.

Freedom House — a global freedom watchdog — reported in 2018 that North Korea is one of the world’s worst regimes, depriving its citizens of political rights, civil liberties, and a free press. Among other things, it also maintains political prisoner camps where torture, forced labor, starvation, and other atrocities take place that a United Nations inquiry found to rise to the level of crimes against humanity.

Transparency International, a global coalition against corruption, ranked North Korea as the world’s third most corrupt nation in its 2016 evaluations. It considers countries such as this plagued with untrustworthy and badly functioning public institutions like the police and judiciary.

The CIA World Factbook reports that the average annual income of North Koreans is currently $1,700, unevenly distributed between the ruling class, who live in splendor, and millions of downtrodden residents living in squalor and misery. Conversely, the per-capita GDP of residents in neighboring countries is, for China, $16,700; Russia, $27,900; South Korea, $39,500; and Japan, $42,900.

A 2017 United Nations report estimated that about 18 million people across North Korea (70 percent of the population) suffer from food insecurity and undernutrition. While millions of North Koreans go hungry, Global Firepower and the American Federation of Scientists reported that North Korean leaders invested scarce resources into maintaining one of the world’s largest militaries and a rising nuclear development program, ostensibly to preserve the Kim dynasty.

It’s clear that the current North Korean regime poses a notable and present danger to the Korean people, the region, and the world. And it’s equally clear, to objective Americans, that President Trump offers a new way forward in dealing with the rogue regime. Trump’s way forward is based on abandoning old failed approaches for dealing with the Kim dynasty by doing things never before tried, such as meeting with Kim, stepping foot on North Korean soil, insisting that strict economic sanctions will only be lifted when tangible denuclearization occurs, and imposing stiff tariffs on North Korea’s chief benefactor, China, as part of a nuanced strategy to facilitate positive change in North Korea.

Donald Trump is proving to be an extraordinary president, willing to try unconventional approaches to governance and foreign policy, to the dismay of many of his critics. One prime reason that American voters gave this non-politician and successful businessman the presidency was to eliminate policies and programs that no longer work. And when it comes to solving the complex North Korea problem, that is exactly what he is doing by thinking and taking action outside of the traditional political and foreign policy box.

His political foes and some so-called foreign policy sages may not like it, but if President Trump’s North Korea initiatives succeed in getting that government to denuclearize, open up its government to installing free markets and encouraging investments, and granting its people more freedom, humanity benefits. Let’s hope Trump succeeds where others have failed.

Fred Gedrich is a foreign policy and national security analyst. He served in the U.S. Departments of State and Defense.