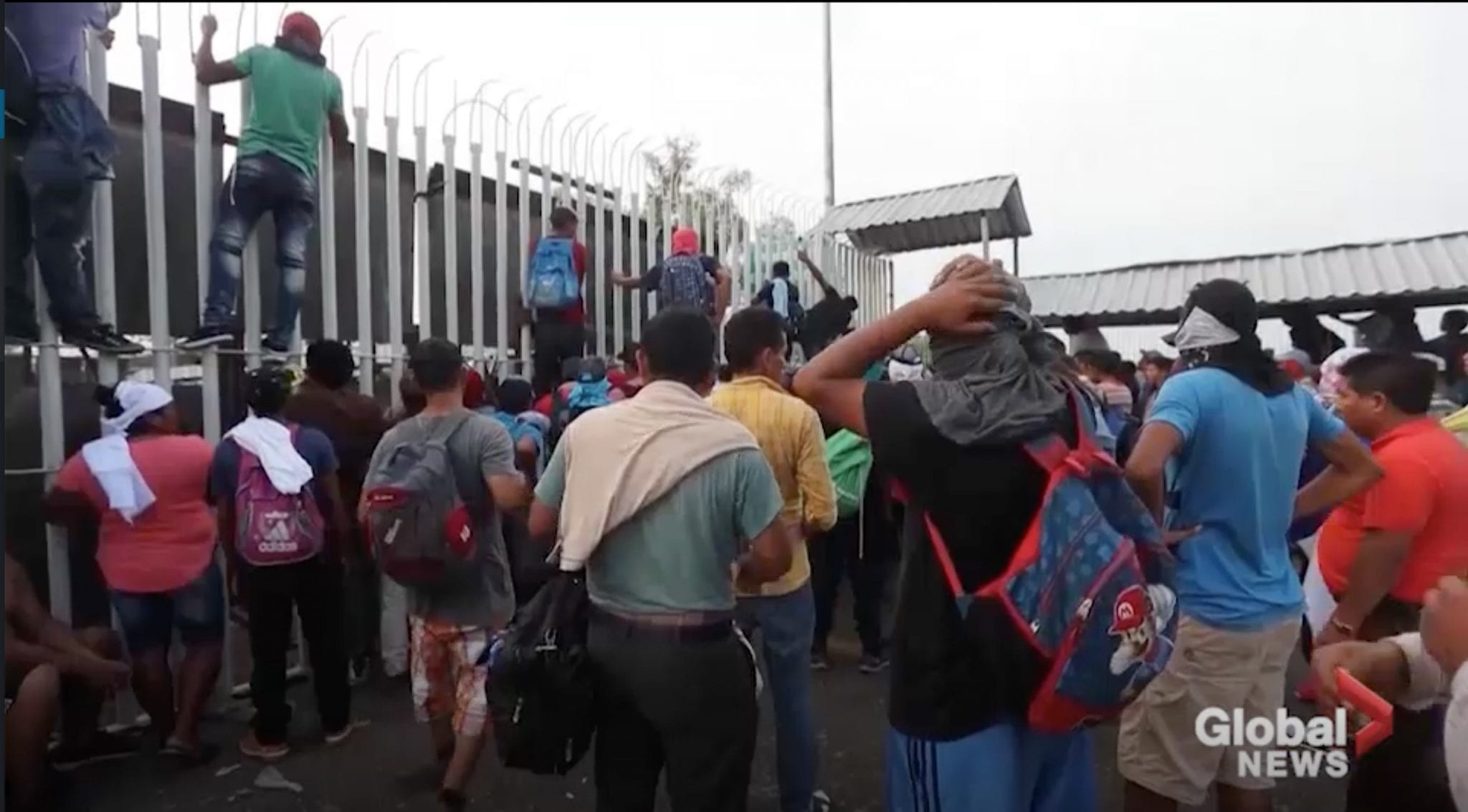 More Politics
Sign Up to receive Our Latest Updates!
Register
Hot Off
The Press
At Large
Rodrigo Duterte’s COVID Dictatorship
by Doug MacArthur
Space Race
What’s Next After the Mars Landing
by Mike Howard
Another Perspective
Why Biden Is Wrong on Saudi Arabia
by Steve Postal
Loose Canons
Biden Buddies Up to Iran and Afghanistan
by Jed Babbin
Media Matters
It’s the End of the Ride
by Debra J. Saunders

The most fascinating feature of the Trump era is the President’s uncanny ability to bilk the media into providing coverage that confirms the percipience of his political positions. Their 24/7 coverage of the migrant caravan, complete with images that couldn’t be better for his stance on illegal immigration had they been produced by the White House Press Office, is little short of an in-kind contribution to the GOP. Combined with the incredibly irresponsible Democratic open borders platform, the media are materially improving Trump’s approval numbers and reducing the chances that the Republicans will lose either house of Congress next week.

The major polls show Trump’s approval rating approaching 50 percent. The NBC/Wall Street Journal poll, for example, recently put it at 47 percent and Rasmussen showed it at 48 percent yesterday. Meanwhile, the political prognosticators who so recently predicted that a Democratic blue wave would wash away the Republican majority in the House of Representatives are now considerably more circumspect. Larry Sabato, head of the University of Virginia’s Center for Politics, who projected in August that the Republicans were all but doomed in the House and perhaps in the Senate as well, now discusses the midterms with more caution:

Our current hard count in the House is 212 D, 202 R, 21 toss-ups. Neither party is over 218, a majority. Democrats have the better chance to go over the top, since 20 of 21 tossups are currently held by the GOP. That doesn’t guarantee that the Democrats actually will.

The media reflexively supply the public with countless images of people marching toward our border, breaking down barriers and fighting with Mexican police, and have no idea that they’re proving Trump right. The optics of the caravan are so bad for the open borders crowd, in fact, that even Trump-haters like Andrew Sullivan are advising the Democrats to adopt a more rational position if they want to prosper in the near future. He points out that the pervasive influence of social media worldwide allows ever more people to learn what life is like here and encourages them to head our way. He then spells out the political consequences for the Dems:

As we can see right now in front of our eyes, elections can turn on this.… Until one Democratic candidate declares that he or she will end illegal immigration, period, shift legal immigration toward those with skills, invest in the immigration bureaucracy, and enforce the borders strongly but humanely, Trump will continue to own this defining policy issue in 2020.

The Democrats have, thus far, failed to listen to such advice. Instead, they collectively call for the abolition of ICE and change the subject to fictitious Republican threats to their health care. They seem to believe that, combined with the usual whoppers about the GOP’s dark conspiracy to cut Social Security and Medicare, this will allow them to escape the illegal immigration issue. The Democrats are trying to divert voter attention from a huge problem they can see on their television screens every night by yammering about pre-existing conditions. Trump, meanwhile, is exploiting this blunder by reminding the electorate why immigration is broken:

Every time you see a Caravan, or people illegally coming, or attempting to come, into our Country illegally, think of and blame the Democrats for not giving us the votes to change our pathetic Immigration Laws! Remember the Midterms! So unfair to those who come in legally.

Trump not only tweets this message to his 55 million followers, he consistently repeats it at the rallies he has been holding all across the country on behalf of Republican congressional candidates. And the media is, of course, broadcasting the rallies at which he nails the Democrats for the negligence of the broken immigration system. They denounce him, of course, for what they insist is racism, xenophobia, demagoguery, ad infinitum. But Trump couldn’t care less about their opinions. He knows the local and national media will cover his speeches. Thus, MoveOn.org began gathering signatures in August for a petition demanding that CNN stop doing so:

As the largest deliverer of “NEWS” in America, please, stop covering Donald Trump rallies.… CNN has been turned into a 24 hour “Trumpathon”! The war in the Middle East, Isis, Syrian refugees — all other World and National news stories have been forgotten. This Trump hysteria is seriously impeding the Democratic process and examination of real issues which concern all Americans and the World!

The folks at MoveOn.org are obviously a little fuzzy on the First Amendment, and even less sophisticated concerning how cable television networks remain financially viable. They routinely represent the President as a knuckle-dragger with little intelligence and less leadership capacity. But he obviously understands that without him, CNN would be battling it out with the Cooking Channel for viewers. And it is by no means a given that the latter would lose that contest. The Cooking Channel would have a competitive advantage in as much as it doesn’t deal in fake food. It isn’t likely that Trump is worried about CNN blacking out his rallies.

Thus he continues to punk CNN and the rest of the “news” media. He knows they will provide coverage, and show unnerving images of the caravan while they slander him. But, to paraphrase an observation once made by Reagan aide Michael Deaver to Lesley Stahl, “You guys in Televisionland haven’t figured it out.…When the pictures are powerful and emotional, they override if not completely drown out the sound.” In other words, when the voters watch an army of illegals marching toward our border, knocking down fences and policemen alike, they don’t even hear the talking heads. Trump knows this instinctively, and it is why he’s winning.

David Catron
Follow Their Stories:
View More
David Catron is a recovering health care consultant and frequent contributor to The American Spectator. You can follow him on Twitter at @Catronicus.
Most Popular
1
Special Report
Derek Chauvin’s Trial: Countdown to a Kangaroo Court
by George Parry