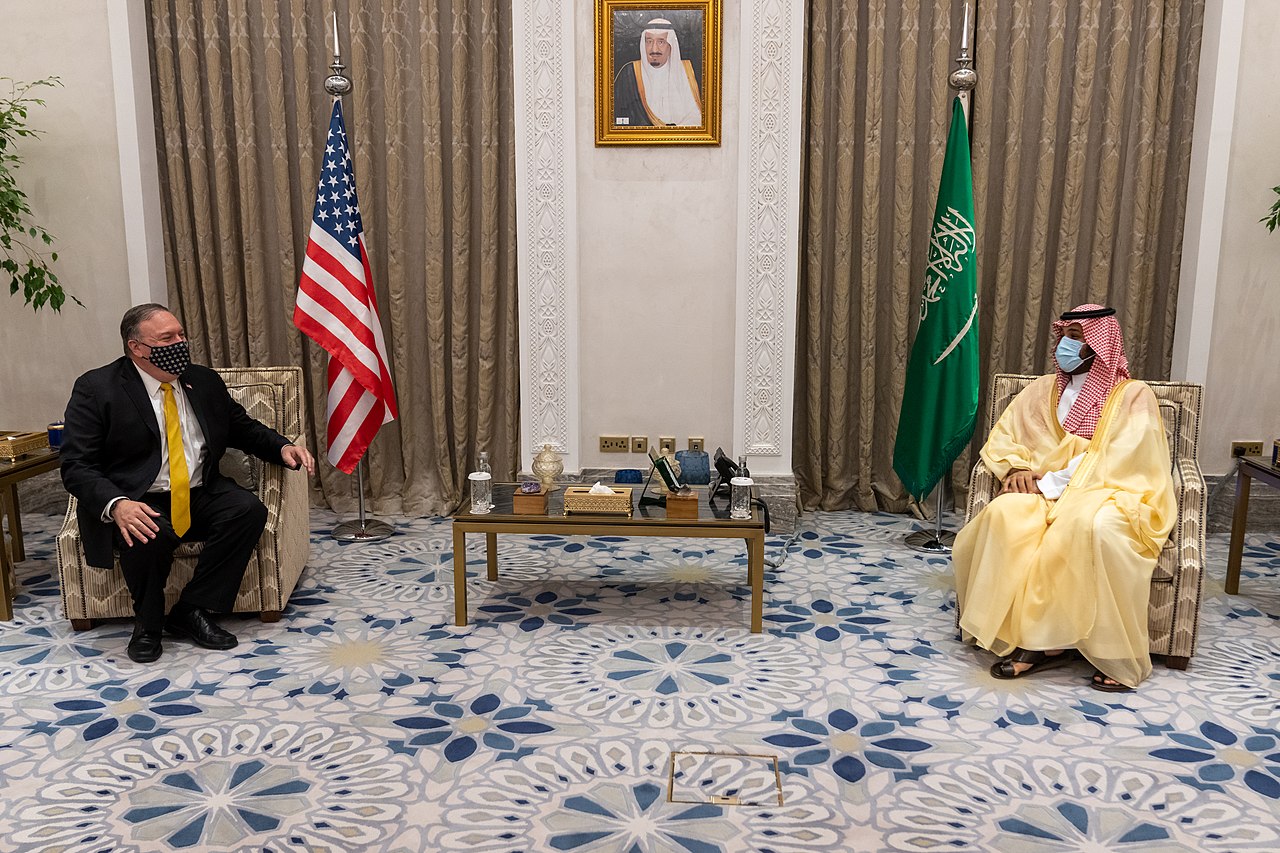 The Trump administration continues to score victories in Middle East diplomacy. This weekend, Secretary of State Mike Pompeo met with Saudi Crown Prince Mohammed bin Salman in Neom, Saudi Arabia, as part of the secretary’s recent tour of several countries in the Middle East. The two were joined by an Israeli delegation including Prime Minister Benjamin Netanyahu, Brig. Gen. Avi Bluth, and Mossad chief Yossi Cohen. The visit marks the “first known high-level meeting between an Israeli and Saudi leader.” Only days later, the Wall Street Journal reported that Google is planning to link Israel and Saudi Arabia via underwater fiber-optic cable. Google is seeking financing from several companies including an Omani communications company. Saudi Arabia and Oman are two of the countries most likely to follow in the footsteps of the UAE, Bahrain, and Sudan in normalizing relations with Israel.

Developments in the Israel–UAE Relationship

Israel–UAE relations continue to grow since my last update. Israel’s cabinet, as well as the UAE, ratified a mutual visa waiver program, and the two countries have agreed to visa-free travel prior to the launch of this program. El Al Airlines will begin flights to Dubai on December 13. Israeli Arabs are also increasingly benefiting from increased business with and travel to the UAE. Israeli and Emirati chapters of Startup Grind hosted an online event with several other countries to discuss joint business opportunities. Additionally, former Israeli Finance Minister Moshe Kahlon will run a new investment fund with members of Abu Dhabi’s royal family. Prime Minister Netanyahu will reportedly visit the UAE next week.

Developments in the Israel–Bahrain Relationship

Israel–Bahrain relations also continue to grow since my last update. Israel’s Knesset approved its normalization agreement with Bahrain, 62-14, with all 14 votes against coming from the Arab Joint List party. (The Joint List were also the only ones who voted against the Knesset’s 80-13 approval of Israel’s normalization with the UAE in mid-October). Secretary Pompeo’s recent trip to Israel was joined by a Bahraini delegation. When in Israel, Bahraini Foreign Minister Abdullatif Al-Zayani commended the “warm peace that will deliver clear benefits to our peoples.” Both countries are on track to open embassies in each other’s country by the end of this year. Israeli Foreign Minister Gabi Ashkenazi will soon be the first Israeli minister to visit Bahrain in an official capacity, and Prime Minister Netanyahu will go to Bahrain on an official visit “as early as next week.”

In tourism, Bahrain and Israel will also launch an “e-visa” program on December 1 for mutual travel. Manama’s Ritz Carlton became Bahrain’s first hotel to have a kosher kitchen.

Developments in the Israel–Sudan Relationship

There is even further movement on the Israel–Sudan relationship. Israel sent its first delegation to Sudan this week. Talks between the two countries addressed how Israel could assist Sudan with food, water, agriculture, and health care. The Israeli delegation also met with an American delegation from the U.S. Embassy in Khartoum.

The Trump administration also took several major steps that further recognized Israeli sovereignty in Jerusalem, Judea and Samaria, and the Golan Heights. The U.S. will now recognize Americans born in Jerusalem as born in Israel on their passports. While recently in Israel, Secretary Pompeo called Jerusalem “the eternal capital of Israel.” He also announced that the United States would label products from the so-called “settlements” of Judea and Samaria “Made in Israel.” Secretary Pompeo visited a winery in Judea and Samaria, which released a line of wines named after the secretary. Secretary Pompeo also visited the Golan Heights and recognized it as part of Israel, echoing an earlier declaration by the Trump administration.

There have been several positive developments suggesting that the Trump administration might be able to broker other normalization agreements with Israel. Secretary Pompeo hinted as much in a recent interview with Al-Arabiya (Dubai). In addition to potential deals with Saudi Arabia and Oman, recent developments bring deals between Israel and Djibouti and Niger, and even long-shots like Qatar, Pakistan, and Lebanon, back into play.

Djibouti. While stating that the “conditions aren’t ripe” for a normalization agreement with Israel, Djibouti President Ismail Omar Guelleh said that “All we ask that the [Israeli] government do is make one gesture of peace [with the Palestinians], and we will make 10 in return.” Back in August, Mossad Chief Eli Cohen predicted that Sudan would follow the UAE in normalizing relations with Israel, followed by a country from the Horn of Africa, which many believe is Djibouti. Citizens of Israel and Djibouti currently visit each other’s countries.

Niger. Mossad Chief Eli Cohen also stated that Israel and Niger were in talks for normalizing relations, but that the success of the talks hinges on the victory of Mohamed Bazoum in Niger’s presidential elections next month. Bazoum supports normalization with Israel.

Qatar. Secretary of State Mike Pompeo recently met with Qatari Deputy Prime Minister and Minister of Foreign Affairs Mohammed bin Abdulrahman Al Thani in Doha. While the State Department’s press release stated that the two discussed “bilateral issues of interest, in addition to regional issues that included Iraq, Lebanon and Syria, the importance of a united Gulf to stand against the Iranian regime’s destabilizing activity, and the risk to the region presented by China,” it is unclear if they also discussed normalization with Israel. Al Thani had recently stated, “I think it’s better to have a united [Arab] front to put the interests of the Palestinians [first] to end the [Israeli] occupation,” but was also respectful of other countries opting for normalization, saying: “It is up to them at the end of the day to decide what is best for their countries.” While such a “Palestine first” position has been the stance of Arab states for decades, recent deals with the UAE, Bahrain, and Sudan show that at least some are willing to change. So there is hope for even Qatar.

Kuwait. Secretary Pompeo also met recently with Kuwaiti Foreign Minister Sheikh Ahmad Nasser Al-Mohammad Al-Sabah in Washington, D.C. Their remarks to the press and the readout of their meeting mentioned cooperation against Iran and trade between the U.S. and Kuwait, but did not mention Israel. I could not find any other recent developments indicating Kuwait was moving towards or away from normalization with Israel.

Pakistan. There is a long-shot possibility that Israel and Pakistan could normalize ties. An unnamed source recently said that talks exist through a third party between Israel and Pakistan, although that source dismissed them as not serious. Similarly, the Pakistani Foreign Ministry referred to such talks as “baseless speculation.” But Pakistan Prime Minister Imran Khan recently opened the door for possible normalization with Israel. Specifically, Khan stated, “I have no second thought about recognizing Israel unless there is a just settlement that satisfies Palestine.” Regarding this “Palestine first” position, I hold out similar hope for normalization with Israel as I do with Qatar given what I said above. Khan admitted that he was being pressured by countries to recognize Israel, but he wouldn’t state which ones (Saudi Arabia, the United Arab Emirates, and/or the United States could be possibilities).

Normalization with Israel may likely improve Pakistan’s relationship with the United States, and potentially with India as well, given Israel and India’s strategic partnership. Former Pakistani President Pervez Musharraf, then in exile in London (he is currently in exile in Dubai), gave an interview to Israeli newspaper Ha’aretz in 2012 stating that Pakistan could benefit from normalization with Israel. Prime Minister Benyamin Netanyahu, on a 2018 visit to India, said that “We [Israel] are not an enemy of Pakistan and Pakistan should not be our enemy either.”

Lebanon. Since my last update, talks between Israel and Lebanon to demarcate their maritime border appear to have stalled. Lebanese President Michel Aoun and Israel Energy Minister Yuval Steinitz each cast blame on the other for the impasse. To move forward, Steinitz proposed to Aoun on Twitter that the two should try to resolve their differences through direct negotiations in Europe. Aoun has yet to reply. While still very much a stretch, I would not rule out an Israel–Lebanon peace just yet, especially given statements before the U.S. presidential election from Aoun, as well as his daughter, indicating that they would be amenable to peace with Israel under certain circumstances.

Not the Israeli Arab and Palestinian Leaderships. Predictably, the Arab–Israeli and Palestinian leaderships continue not to be on board with peace. Joint List MK Aida Touma-Sliman accused Secretary Pompeo, Crown Prince bin Salman, and Prime Minister Netanyahu of attempting to “stir up a war” and “set the region on fire.” Senior Hamas official Sami Abu Zuhri called the diplomatic visit to Saudi Arabia “an insult to the nation and an invitation to attack Palestinian rights.” Actions and statements from the Palestinian Authority have been mixed. On the one hand, its leaders opposed the diplomatic meeting in Saudi Arabia. A PLO official also told the New York Times that the PA policy on financing of the families of terrorists would change, but then also stated on Fatah’s Facebook page that such salaries are “non-negotiable.” To their credit, however, the Palestinian Authority has reportedly returned its ambassadors to the UAE and Bahrain, following their initial protest to the Abraham Accords. The PA has also resumed security cooperation with Israel. But given their continued maximalist positions, it is highly unlikely that the Palestinian Authority will join the movement towards peace in a more meaningful way.

Most Popular
1
Political Hay
Time to Boycott Baseball and Coke — And More?
by Jeffrey Lord