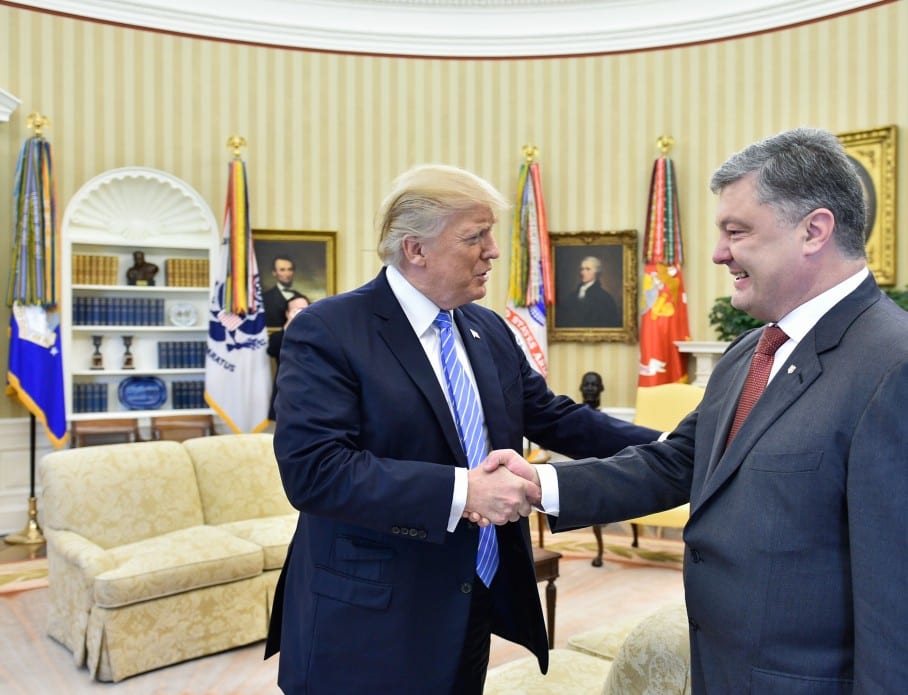 President Trump has consistently promised to both “drain the swamp” that is Washington, D.C., as well as to make our allies — particularly those in Europe — more accountable to the American people for receiving vast sums of foreign aid from the U.S. government. Earlier this year, Ukraine, the poorest country in Europe, with a chaotic political system (one that is bifurcated between a Russian-friendly minority population mostly in the country’s east), was set to receive $400 million worth of foreign aid from the United States. Some of this aid would include lethal weapons for their military to deter future Russian aggression (in 2014, the Russians infamously invaded and annexed the geostrategically vital Crimean Peninsula).

The president had previously authorized lethal aid to Ukraine. Trump was annoyed that none of America’s European allies were paying anywhere near as much to help prop up the troubled Ukrainian government. He had also become upset with the amount of money Ukraine had received from American taxpayers over the years — especially in light of the fact that so many Democrats enjoyed dubious (and prosperous) ties to several shady entities in Ukraine.

Notably, much of the controversy surrounding the absurd Trump-Russia collusion delusion emanated from sources linked to Ukraine. You see, as a country under active Russian military attack, Ukraine’s very survival is on the line. The Ukrainians were petrified by Trump’s stated desire to negotiate with Russia over several points of contention — including on the matter of Ukraine. To Kiev, this sounded as though Trump, if elected to the presidency, would sell the besieged country out to Moscow (although just the opposite has occurred under Trump).

Thus, Ukraine’s leaders acted assiduously to secure the protection and loyalty of the U.S. government by coopting influential individuals of America’s political class. Many of these Western elites were powerful members of the Democratic Party. Also, the Democrats have long had close associations with Ukraine’s leaders going back to 1994, when the Clinton administration negotiated an alliance with Ukraine wherein the Ukrainians dismantled the 300 nuclear weapons that the Soviet Union left behind in their country, in exchange for sweetheart foreign aid deals and guarantees of American military protection, should the Russians ever return.

Of course, once the nukes were removed from Ukraine, it became vulnerable to attack from its larger Russian neighbor that was still armed with the military assets of the now-defunct Soviet Union. Putin and his siloviki have viewed 20 years of European Union and NATO “double expansion” (as they refer to it) as a direct threat to Russia’s territorial integrity. Further, Russian leaders believe that the EU and NATO — at the behest of Washington, D.C. — have sought to incorporate Ukraine into these American-dominated organizations, so as to weaken Russia geopolitically.

Trump desired to determine, as he once said in 2016, to determine “what the hell was going on” with Ukraine. Why were American taxpayers doling out hundreds of millions of dollars to a country that may never be able to repay that money or could potentially be undermining our democracy at home?

Rudy to the Rescue?

In this morass, Trump’s personal lawyer, Rudy Giuliani, appears to have embarked upon a personal crusade to identify specific instances of corruption that the Biden family may have engaged in with Ukraine’s government during the Obama administration. Why Giuliani spent so much effort in this endeavor is perplexing. The Left argues it is because Giuliani wanted to gather dirt on Joe Biden. Yet few people in Trump’s orbit seriously think Joe Biden is a real political threat to anyone but himself. For his part, Giuliani insists that his efforts to discover evidence of Joe Biden’s corruption is linked to the wider Trump administration desire to understand the roots of the Russia collusion delusion and the bizarre relationships between top tier Democrats and Ukraine’s political elite.

Giuliani’s Biden obsession aligned, unfortunately, with the Trump administration’s intense review of Ukraine aid and potential nefariousness that Ukraine may have engaged in to prevent Trump’s election in 2016 (in order to avoid losing their erstwhile American allies in the face of increased Russian aggression). Therefore, the Democrats could argue impropriety and push for impeachment, as they are currently doing.

Before the impeachment (non)scandal broke, an American State Department official assigned to the embassy in Ukraine, Bill Taylor, texted with America’s ambassador to the European Union, Gordon Sondland, and the Trump administration’s special representative to Ukraine, Kurt Volker, over the State Department’s encrypted text messaging service. In these texts, Taylor announced his objections to the freezing of the foreign aid on the grounds that it was being done to further President Trump’s reelection campaign.

Sondland, who has close ties to the president and his inner circle, explicitly stated that the president did not want “quid quo pro” from their dealings with Ukraine. In other words, the president was not seeking damaging material on Joe Biden from Ukraine’s government in exchange for releasing foreign aid money to Ukraine. Trump’s moves in Ukraine had to do with overall corruption and, more importantly, ensuring American taxpayers were not being bilked in the form of generous foreign aid to a broken government.

The Democrats claim that Trump attempted to garner a bribe from Ukraine; that he explicitly wanted damaging information on Joe Biden heading into the 2020 presidential campaign in exchange for giving the $400 million (plus the lethal aid) to Ukraine. This does not appear to be the case at all. What’s more, the recently released encrypted text messages between Kurt Volker, Bill Taylor, and Gordon Sondland indicate that the president and his team were less interested in damaging Joe Biden’s presidential campaign than they were in getting to the bottom of potential Ukrainian malfeasance (while using U.S. foreign aid as leverage to get Ukraine to shape up its behavior). And, it should be noted here, the pursuit of corruption is a legitimate function of the U.S. government — and since Donald Trump is the chief executive, he is well within his rights to inquire about potential corruption in foreign countries with the leaders of those countries.

The two events, freezing foreign aid to Ukraine and Giuliani’s pursuit of Joe Biden’s troubling past in Ukraine, are, in fact, unrelated. The Ukrainians claim they felt “pressured” by the Trump administration to investigate Biden in exchange for receiving the vital aid money and weapons.

While Ukraine’s new president, Volodymyr Zelensky has expressed support for Trump and the general global nationalist-populist movement, many of Ukraine’s elite — notably the previous president, Petro Poroshenko, and his inner circle — distrust and dislike Donald Trump. It remains to be seen whether or not Zelensky can clear out the anti-Trump elements within his own government before they can damage Trump’s presidency further.

Ukraine Isn’t Worth a War with Russia

President Trump clearly does not believe that Ukraine is a land worth potentially warring against nuclear-armed Russia over (he’s right about that, by the way). Continuous, unquestioning, foreign and lethal aid to Ukraine only destabilizes the region further while doing little to mitigate the risk of a large-scale conflict with nuclear-armed Russia — and Trump intuitively understands this.

That so many powerful people from America’s political class appear to have been bought and paid for by Ukrainian partisans is disturbing enough. That this reality could help precipitate a potential conflict with Russia is even worse. More than that, though, the idea that the president cannot demand that U.S. taxpayers get a better deal for risking so much by giving so much to a failing state, like Ukraine; or that a U.S. president cannot discuss anti-corruption investigations with his Ukrainian counterpart — without the risk of being made to endure a wasteful impeachment inquiry — is even more galling. The Democrats are desperate and must be punished at the polls for their continuing absurd behavior.

And the president must be allowed to conduct matters of state unimpeded by congressional overreach … just as the Constitution envisioned the president doing.