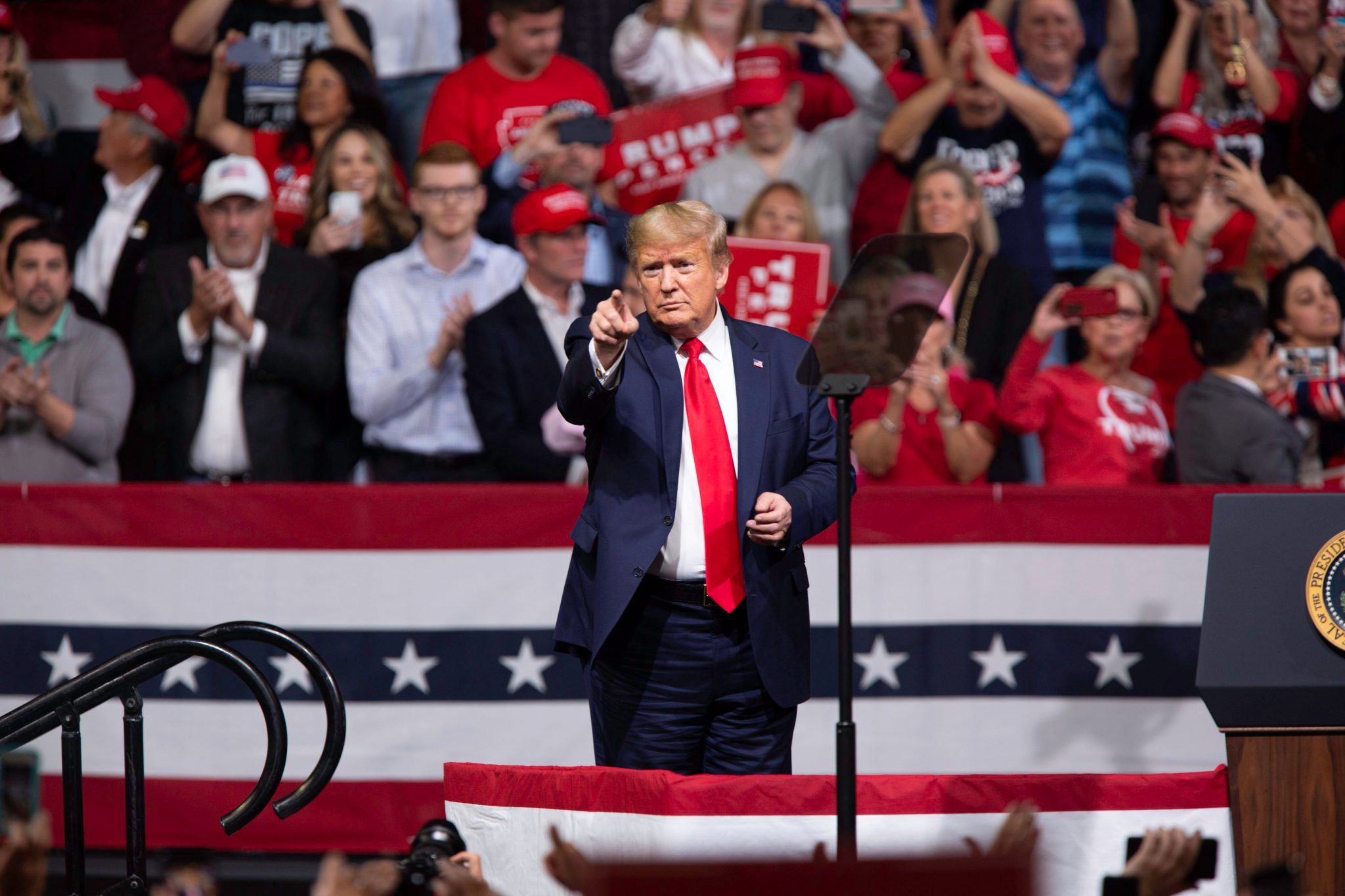 In a proper inaugural ceremony next January 20, absent artifice and minus political cliches, Joe Biden would be called to stand and put his hand on the Bible, and assisted in so doing, and then would start to repeat the phrases prompted by the Chief Justice.

That persona is essentially what got him elected — that is, he was the Non-Trump. What was reckoned to be creeping dementia — a strategy to keep Joe in a closet with the lights out — might have been ordered by a clever Democrat psy-op director who actually learned a lesson from the Hillary campaign.

Trump did not merely “give voice” to the disaffected. He was mad as hell too, and became a believable comrade-in-arms.

As with Hillary Clinton’s complaints when HillaryCare spectacularly failed in the 1990s that “if more people knew its details it would have passed,” the poison pill then, and in her presidential campaign, was precisely the opposite. Too many people began in fact to know very well what they risked. It was not even Hillary Fatigue; it was the acceleration of Hillary Disgust. Familiarity still can breed contempt.

Therefore Joe the phantom cipher would be more successful than Joe the stationary target and, yes, gaffe machine. Even with Johnny Carson’s successors never calling out a Biden Blunder, the handlers imposed a gag order. After stumbling through familiar primary humiliations — a quadrennial sport of the Delaware Dolt — he was not only the Last Man Standing but, in advance of the presidential balloting, a man who at least could be voted the Most Likely to Survive.

Biden is an anomaly in presidential politics. After half a century in prominent positions, there was no swelling tide of support for his elevation. No semblance of a “Go, Joe, Go” constituency. A fourth attempt at the presidency revealed his ambition as a mere knee-jerk reaction when four years rolled around, not a savior’s ideological imperative. Just as 47 years in the Senate did not produce a notable Biden Act, to label the Democrat Party “Biden’s Party” is laughable, and likely to remain so.

It is the purest example of counter-intuition, all other factors aside, to accept the logic of President Trump’s defeat. The relative size of campaign crowds, the array of impressive national economic factors before and after the pandemic’s worst, the visceral uptick in support and endorsements from non-traditional Republican constituencies, foreign-policy miracles from the dissolution of ISIS to hostile states becoming docile states, miraculous amity between Israel and her neighbors, effected by the president and his administration, the smashing of harmful treaties and inimical alliances and trade deals — amid choruses of apocalyptic warnings — only to immediately be replaced with improvements. Et cetera.

In view of these factors, plus his reasonable approval ratings (uniformly the equal or superior of Obama’s at similar stages of their administrations), as well as the ultimate election results that generally were favorable to the Republican Party in state legislative races, House, and Senate contests … the president’s defeat is indeed counter-intuitive. And, of course, suspicious. America is at war, although unconventionally, yet it chose to “change horses in mid-stream”? Against tradition.

It will be tempting, in the post-mortem that has begun and will continue as long as men have ears, to ascribe Trump’s bumpy fate to Trump. Even some loyalists uncomfortably refer to his rough edges and social iconoclasm. “He is his own worst enemy,” they say, and an old joke would say that a million of his opponents would arise and shout, “Not while I am alive!”

But part of the Trump phenomenon is that he would not be Donald Trump without those attributes. It is likely that the resulting appeal and revulsion regarding his personality canceled each other.

In fact the china shop that been so daintily arranged by panjandrums of both parties for two generations needed the intrusion of a bull. That explains President Trump; that explains his seeming rise from nowhere; that explains the visceral fanaticism of his unique constituency. He checked many boxes on lists of the frustrated and impatient.

Rare are the figures in American political history who have remade their parties and thereby bent the arcs of history. There has been no template, and there cannot be — that is the nature of elemental change. Abraham Lincoln, of course, was consequential, but his party was less than a decade old, and he its first president. So he shaped more than reshaped the Republican Party.

Theodore Roosevelt promised to “continue, absolutely unbroken” the policies of his assassinated predecessor. That was constitutionally impossible — that is, his own constitution — and he redefined the GOP (more than once during his life) and national priorities as well. Franklin Roosevelt actually ran to the right of Herbert Hoover in 1932, criticizing the latter’s proposals for economic interventionism. The Depression and a war satiated his own mania for the Interventionist State, and he fundamentally changed his party and the country, confiscating gold, making Democrat vassals of blacks, and scratching his authoritarian itches.

Four years ago, most observers and movement conservatives would have included Ronald Reagan among the transformers of the corporate state. And he was. But some of his conservative palliatives seem like speed bumps compared to the red lights and stop signs of President Trump.

Many of his rabid followers probably would still confess that they would not want to be next-door neighbors of Trump. But daily they thank God for what he has done.

Trump has been the Blue-Collar Billionaire, and his transformation of the GOP can be called the Trumpublican Revolution.

Trump did not merely “give voice” to the disaffected. He was mad as hell too, and became a believable comrade-in-arms. These Trump realignments of the Republican Party are not temporary symptoms of social distress or ideological angst; and, importantly, they are not the cause.

There will be a protracted period of recriminations on the left. Blacks and Hispanics will continue to rush to welcoming arms of entrepreneurial Republicans and be maligned as ungrateful by their former overseers on the Democrat plantations. Other identity groups will continue to feel accepted in the Trumpublican Party. It is rather a political miracle that Donald Trump was able to effect comity and solidarity between formerly antagonistic constituencies.

Odd bedfellows will be at the Democrats’ lawn party too, but that event will not be as congenial. Already the Squad and socialists are being attacked from within the tent, and vice versa. Speaker Pelosi’s caucus looks to be as secure as are her floating dentures. Where will the GOP mutineers sit? Having registered their snit over the uncouth Donald, how many of them will feel comfortable in the party of unrestricted abortion, socialized medicine, totalitarian-minded moguls, outlawed cows, and LGBTQs destined for the Supreme Court? CNN has only so many spaces at its long tables. And a third party led by William Weld and Jonah Goldberg will attract few adherents. Welcome home, John Kasich? Hardly.

It is not known whether one book or several advisers have educated the former liberal Donald Trump, or who has whispered in his ear for four years. Nobody, it seems; he dismisses confidants too quickly. He has his Paula Whites and Robert Jeffresses, Rudy Giuliani, and assorted relatives, but I am not aware that any of them write his “speeches.” Trump seems comfortable with members of the new coalition under him and behind him, and they in turn are more than comfortable with Trump — and with what he stands for, which is why they have stood in the cold and waited through thick and thin.

Troops that fortify the Trumpublican phenomenon and its new reality find a new party, a party itself worth celebrating. Their virtual celebration is as raucous, back home and for the next years, as the recent iconic airport and stadium rallies, the spontaneous boat and highway parades.

The Blue-Collar Billionaire cannot fade away like an old soldier, even if he wanted to. Which is hard to imagine.

Many former presidents wrote books and newspaper columns. Many went on speaking tours and plied academia and the media. After 2020, it is easy to envision Donald Trump hosting a talk radio program or, as frequently rumored, an alternative Trump cable TV channel. Instantly he would have influence close to that of his successor — different, but perhaps more determinative. He would be fortified by one or more PACs. It also would be, in a way, ultimate revenge to be able to provide immediate responses and alternative solutions to fire up the army of Trumpublicans who would follow their marching orders.

In a larger sense, again considering the Republican makeover, Donald Trump owes it to his own legacy, and to his followers, to fend off the attacks that will not cease. Immediately, the movement’s greatest threat is not from socialists or Democrats, and neither principally from the press nor those who have wanted his destruction more than his defeat. The greatest threats will come from Establishment Republicans wanting to worm their way back into comfortable sinecures and from Washington’s congenital compromisers.

There is no turning back. Half of America would not now contemplate turning back, and perhaps never even looking back. The Party has just started.

Rick Marschall is the author of 74 books and, currently, three weekly blogs. A former political cartoonist and columnist, he has taught at four universities and lectures widely. He has written for RealClearPolitics, The American Spectator, American Thinker, WorldNetDaily, Assist News Service, RealClearReligion, WORLD magazine, and MovieGuide.