Loose Canons DOJ,Donald Trump,Hillary Clinton,James Comey,Joe Biden,Mar-a-Lago,Merrick Garland Trump and the Secret Documents - The American Spectator | USA News and Politics
Menu
Loose Canons
Trump and the Secret Documents
Whatever they amount to, FBI raids and likely indictments of the former president are political actions as bogus as the efforts to impeach him.
by Jed Babbin
Documents allegedly seized by the FBI at Mar-a-Lago (U.S. Department of Justice/Wikimedia Commons) 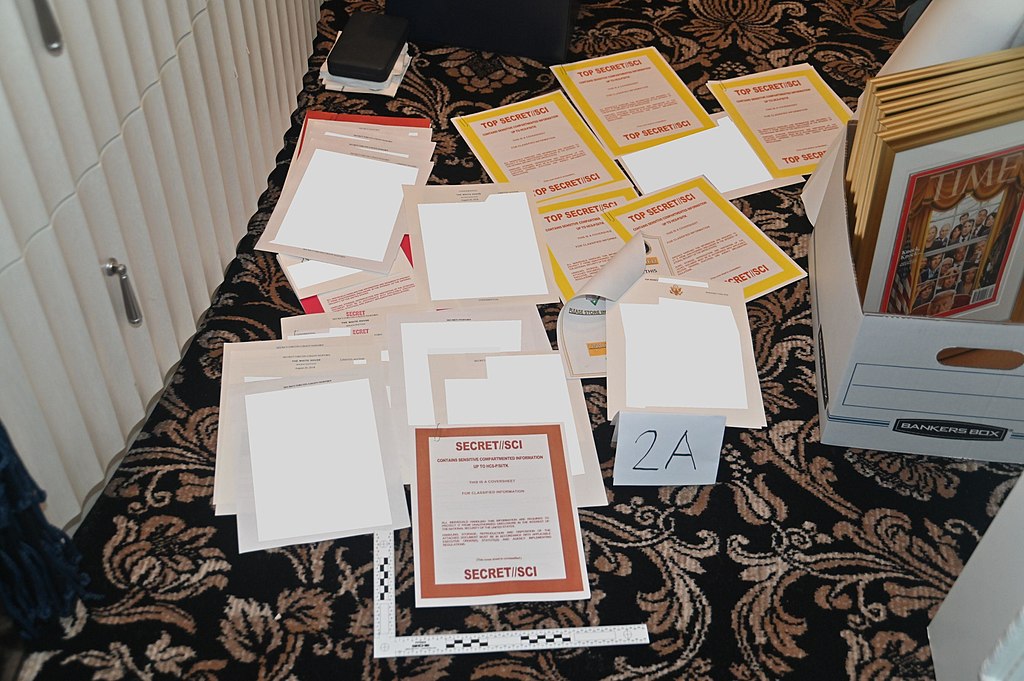 Since 2015 the animating thought among the Democrats and their sycophants in the FBI and our intelligence community has been to prevent and then cripple Donald Trump’s presidency. Among them pursuit of that idea is becoming more desperate as Trump’s 2024 candidacy approaches.

From the Justice Department list filed in court on Friday and selective leaks to anti-Trump newspapers such as the Washington Post, we have learned a little — but not much — about the documents seized by the FBI in its raid on Trump’s Mar-a-Lago estate.

Among about 10,000 documents seized were dozens of classified documents in categories such as top secret, empty file folders marked with classification designations, and thousands of other documents, some of which were seized to show how the secret documents were carelessly stored.

That rather routine decision by the judge has led to some of the most outrageous condemnations of her decision. Some have compared it to the Supreme Court’s decision in Dred Scott, which upheld slavery, and Korematsu, which upheld the internment of Japanese citizens in World War II.

Nonsense. Any reasonable claim that any of the documents are privileged should trigger such a decision.

In civil litigation where documents are produced under civil procedure rules, if one side produces documents to the other — which attorneys do after reviewing them — privileges are waived.

In criminal cases, documents or other materials seized by law enforcement may be privileged. A reasonable claim of possible privilege of seized materials would routinely result in the appointment of a special master — an impartial person — who would review the documents for privilege and report to the judge on his findings.

The Justice Department moved to reverse or limit the decision to allow a special master to review the documents before the FBI could. It seems to be in a big rush to get enough material to indict Trump. It insists risibly that its own review is sufficient to protect Trump’s privileges.

There supposedly is an unwritten Justice Department rule that no indictment of a current political leader be issued within 60 days of an election. Trump won’t be on the ballot in November, but that won’t stop the DOJ from indicting him as soon as it can.

The attorney-client privilege is easy to understand. Any communications between Trump and his lawyers are privileged no matter how small in volume. (There are a few exceptions, such as that a client’s plan to commit a future crime is not privileged and must be reported by the attorney.) The executive privilege is another matter.

Biden and the Democrats want to stop Trump’s likely presidential run — by indicting and convicting him for aiding and abetting an insurrection under the 14th Amendment.

Trump and his lawyers own every communication between him and his lawyers. But other documents, privileged or not, classified or not, would be the property of the federal government. The Supreme Court has never ruled on whether a former president can assert an executive privilege over documents in his possession.

President Joe Biden has already indicated that he won’t support any Trump claim of executive privilege and has delegated — wrongly — his authority over such determinations to the national archivist.

The Justice Department, in its rush to indict Trump, will soon run out of time to appeal the judge’s order to appoint a special master. Both sides have nominated people to serve in that capacity.

That, too, will take time. The DOJ doesn’t want to wait for any of those appeals. Its political aim to block another Trump presidency could be thwarted if it has to wait.

There’s an enormous amount of hyperbole — some probably stirred up by the DOJ — from the left on these issues. One commentator poses the possibility that Trump was about to sell our secrets to foreign governments. Again, nonsense. The biggest problem for the DOJ is its previous inaction on Hillary Clinton’s “Clinton-mail” system.

Some have preemptively defended former Secretary of State Hillary Clinton, whose private “Clinton-mail” server was admitted by former FBI Director James Comey, to have contained a number of top-secret documents and emails about them to and from her staff. “Clinton-mail” was totally unsecured. Anyone — including the nations who are our greatest adversaries — could have intercepted, and probably did intercept, those messages, at any time. In that same statement, Comey contended that a case against Clinton couldn’t be made because there was no intent to violate the law.

But Title 18 U.S. Code Section 793 — the so-called “Espionage Act” — doesn’t have a specific intent standard. Under it, gross negligence in handling classified information is sufficient for a crime to be committed.

Clinton’s emails contained some of our greatest secrets: SI-TK intelligence (special intelligence — Talent Keyhole) from spy satellites and SAPs (Special Access Programs), which are covert operations conducted under the authority of presidential special orders. Some SAPs involve the military, not just the intelligence community. Some SAPs leave blood on the ground.

Indicting Trump for possessing secret and top-secret documents and handling them with “gross negligence” under Section 793 would be amount to almost the exact same conduct that Comey contended was not prosecutable in Clinton’s case. Trump’s conduct, bad as it is, is arguably even less negligent than Clinton’s. Trump had documents stored in boxes that were apparently not protected. Clinton’s email system was comprehensively vulnerable to foreign interception, which likely occurred. Is there evidence that Trump’s boxes were searched by foreign agents?

Unequal justice under the law is one of the principal characteristics of a dictatorship. Biden’s Justice Department won’t be dissuaded from indicting Trump because of that. “Prosecutorial discretion” will be its excuse.

Nevertheless, we have to expect Trump and several of his staffers to be indicted.

Biden and the other Democrats are terrified of Trump’s coming campaign for the presidency. They want to stop his run — by indicting and convicting him for aiding and abetting an insurrection under the 14th Amendment. This is the angle that the Jan. 6 Committee of the House is pursuing.

As I have written earlier, the DOJ will also probably charge Trump under Title 18 U.S. Code Section 2071, which also prohibits someone convicted under it from holding federal office. (Despite the fact, as I have also pointed out, that Section 2071 is unconstitutional because it adds, by law, a qualification for the presidency outside the Constitution. Congress can’t amend the Constitution by passing a law).

None of this will or should stop Trump from announcing his candidacy — likely right after the November election — and campaigning against Biden. The Jan. 6 Committee will soon recommend that Trump be indicted under the 14th Amendment.

Biden has already said that Trump should be prosecuted for his conduct on Jan. 6, 2021. The DOJ will likely proceed with that and any other grounds it can come up with and indict Trump, probably right after he announces his 2024 campaign. Trump will probably seek to rush a trial, and the result will be a media circus that will keep Trump at the top of the news and all the Trump haters in the media in full cry.

The Justice Department’s pursuit of Trump is an obviously political move by Attorney General Merrick Garland with Biden’s approval. Neither apparently has a problem with unequal justice under the law.

The only real possibility for the Democrats to bar another Trump run is the 14th Amendment. Trump’s conduct on Jan. 6, 2021, was execrable. But it doesn’t constitute engaging in an insurrection against the United States.

If the House continues, as it surely will, any DOJ indictment of Trump on that basis would amount to House Speaker Nancy Pelosi’s third impeachment of Trump. Like the first two, it won’t stand.