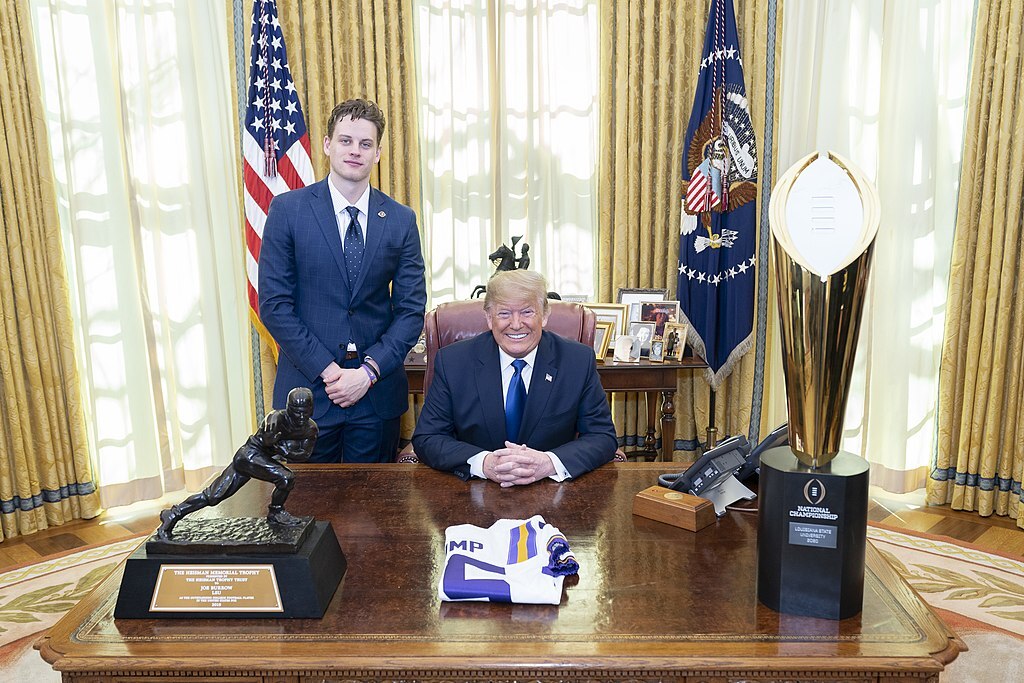 In case you didn’t know, life isn’t fair. But just how unfair was driven home the Sunday before Thanksgiving when last season’s Heisman Trophy winner and the NFL’s number one draft choice, Joe Burrow, suffered a ghastly knee injury in a game against what’s now officially called the Washington Football Team. (Say “Redskins” ever again and your tongue will be separated from your mouth.) His career isn’t over, but it’s not yet clear when or if he’ll play again next season.

Shortly after Burrow’s LSU team defeated Clemson for the national championship in January, the victors came to the White House. President Trump had a great time with them, and singled out Burrow as “a young Tom Brady.” He praised Burrow for the serious money he’s raised for the food pantry in impoverished Athens County, Ohio.

Of course, I was more impressed by the souvenir photo of Burrow and the president behind the Resolute Desk in the Oval Office. A few months earlier I had stood in the same spot as Burrow for a similar photo with Mr. Trump, and it’s become one of my prized possessions. I probably should have it insured with Lloyd’s, along with the Keep America Great cap I received.

Bob Tyrrell, Jeff Lord, and I met with the president for an hour or so that late afternoon — our Indiana friend Vice President Mike Pence, the most decent and likable of men, joined us toward the end of our visit. I carried away countless dizzying impressions, along with a big shopping bag of bling that the president loaded up for us. Yet one thing couldn’t have been more crystal clear: this president is simply delightful, fascinating company. A more authentic chief executive is hard to imagine.

So why do they hate him so? Is it simply because bigotry and loathing have become second nature with so many on the other side? And it never stops. One would be tempted to tell these people to get over themselves, but if they did that what would they have left?

One thing the president makes clear is that he’s more than happy not to be like them. How else to explain how he’s survived four-plus years of contending with the worst lynch mob our politics has ever unleashed against any president?

The mysteries of this past election aren’t likely to be resolved. Mr. Trump received a record amount of votes for an incumbent running for a second term, his party made big gains in Congress, yet he officially lost to a nonentity who didn’t bother to campaign, preferring to hide out in his bunker. (Sorry, Dems, but you asked for it. Expect payback to become a pronounced feature of the next four years.) Unverifiable mail-in votes, as Mr. Trump warned, did their work, and the uncurious, useless media isn’t likely to raise any questions about the matter.

One might now be tempted to call Mr. Trump a one-term wonder, someone like James Polk who accomplished great things in his short tenure (1845–49). But that would be selling the man short. Last time I checked, Pope Francis is eighty-three, an age Mr. Trump won’t turn until 2029. If Mr. Trump decides to run again in 2024, he’ll be just about Mr. Biden’s current age, and certainly spryer. And it will be genuine payback to his perpetually disloyal opposition if he turns out to be not only the forty-fifth president of the United States but also the forty-seventh. Life will suddenly become fairer.