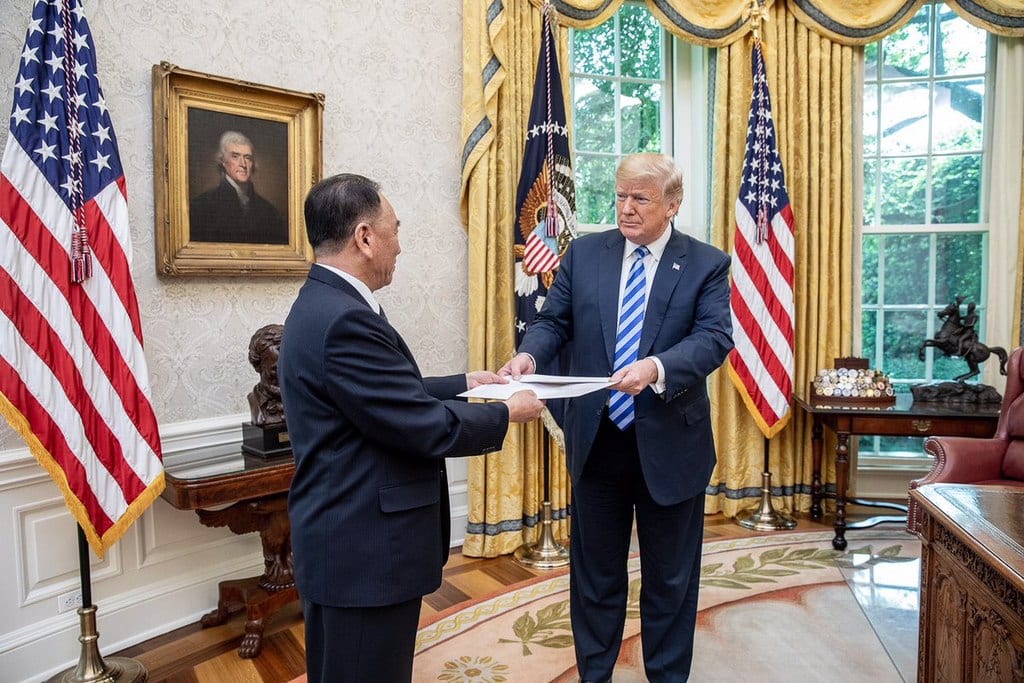 If President Barack Obama had extended a hand to Kim Yong Chol in this manner, it’s hard to imagine Republicans not accusing the Democrat of a flagrant act of appeasement.

Ahead of the Singapore summit scheduled for June 12, Pyongyang already can claim a good public relations get. And it didn’t help that Trump looked a little too eager to dance with the head of the hermit kingdom, Kim Jong Un. “The Art of the Deal” looked particularly artless.

Kim Yong Chol is not your usual button-down diplomat. He is the former head of North Korea’s top spy agency, the Reconnaissance General Bureau, and the man Seoul blames for a 2010 torpedo attack on a South Korean navy ship that killed 46.

U.S. officials also blame Kim Yong Chol for the worst cyber attack on U.S. soil, an attack against Sony in retaliation for the 2014 farcical movie The Interview, about a TV newsman and his producer who land an interview with the North Korean leader.

After the big hack, Washington banned Kim Yong Chol from traveling in the United States. Foggy Bottom had to issue a special dispensation to allow him to travel to New York last week to meet with Secretary of State Mike Pompeo, a session that led to the Oval Office sit-down.

Obama Under Secretary of State Ellen Tauscher told the Las Vegas Review-Journalthat Kim Yong Chol’s visit to the White House provides “a good example of how unconventional and norm-breaking” the Singapore summit is. Tauscher has long warned that with or without a deal, Kim Jong Un wins a summit simply because it boosts his global image.

Long-time hawks have reason to scowl as well.

At a Foundation for the Defense of Democracies panel, Bruce Klingner of the conservative Heritage Foundation compared Trump’s grip-and-grin photo op with Kim Yong Chol to a 2009 episode involving an American delegation in North Korea. In that instance, former President Bill Clinton told his team not to smile when they arrived in Pyongyang to free two American journalists who had been imprisoned for illegally entering the country.

“It’s fine to meet with senior officials. That’s why also we have diplomats,” Klingner said, adding that there are ramifications.

Other world leaders see Trump shaking hands with the guy responsible for at least 46 deaths in South Korea, and behind the largest cyber attack on U.S. soil, and they wonder why we should enforce sanctions if Washington rolls out the welcome mat to a high-ranking official from a hostile government not allowed to travel here.

“If your standard is you can’t meet with this despicable person in North Korea, you’re never going to be able to meet with a North Korean,” countered Anthony Ruggiero of the Foundation for the Defense of Democracies, who found Trump’s statements outside the White House to be “far more damaging.”

Ruggiero was referring to Trump’s response to a reporter’s question about whether the administration’s “maximum pressure” sanctions campaign against North Korea was over.

“It’s going to remain what it is now,” Trump replied, but then added, “I don’t even want to use the term ‘maximum pressure’ anymore… because we’re getting along.”

Getting along? That undercuts the use of “maximum pressure” as a means to further isolate Kim Jong Un.

At the Rose Garden with Japanese Prime Minister Shinzo Abe on Thursday, Trump told reporters, “If you hear me say we’re going to use maximum pressure, you’ll know the negotiation did not do well.”

It wasn’t that long ago that news stories about Trump and his North Korean counterpart focused on the war of words between the two temperamental heads of state. Kim Jong Un called Trump a “mentally deranged US dotard” and Trump called Kim “little Rocket Man” as he threatened “fire and fury.”

At the end of the next week, if the summit comes across as a feel-good exercise with no denuclearization in sight, will the Twitter feud feel like the good old days?