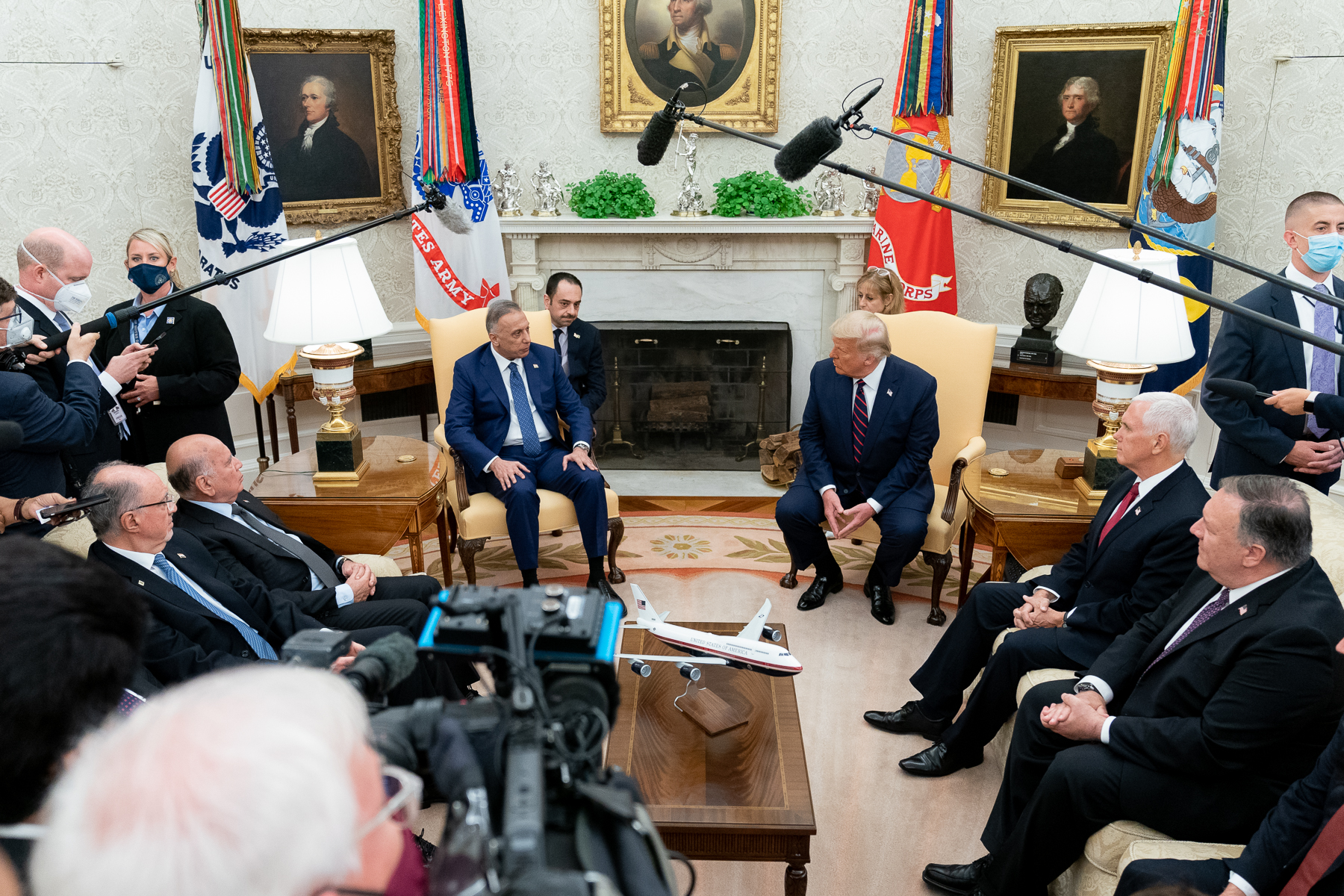 President Donald Trump recently pointed to Joe Biden’s support for “these crazy endless wars.” The president also blamed the top military brass, in contrast to those in the ranks, for wanting to “fight wars.”

The latter claim isn’t strictly accurate. Even the generals tend to be cautious about getting into conflicts. But once in they never seem to want to leave: Afghanistan, Iraq, and Syria are all stupid places where American forces are fighting today, yet the Pentagon continues to obstruct Trump’s attempts to withdraw.

But the real base of support for endless wars comes from the Blob, the Washington foreign policy establishment. There are Republican members — such as the late John McCain, who never found a war he didn’t want Americans to fight, and Lindsey Graham, who thought nuclear war with North Korea would be just fine since the devastation would be “over there,” not “over here,” a singularly moronic judgment. But the group is overwhelmingly center-left, filled with those who have spent their careers imbibing the waters of the Potomac, Hudson, and East rivers. They are the ones who are driven to a frenzy whenever Trump suggests that the U.S. should stop patrolling yet another failed state in the Middle East.

The president has the issue right. Sometimes war is necessary, but only rarely, and then America should fight hard and finish the job. No more trying to fix failed states by supporting al-Qaeda affiliates in the midst of civil wars in which no outsider can even name all the players. The conflicts are the Washington equivalent of fantasy football, paid for with the lives and wealth of Americans across the country — and people in other nations as well.

Conservatives should rediscover the hatred of war that animated their predecessors’ opposition to mad foreign adventures. For instance, in World War I it was the ostentatiously arrogant, hypocritical, and sanctimonious Woodrow Wilson, a proud progressive, backed by the Eastern commercial elite, who imagined that sacrificing Midwest farm boys in France’s Belleau Wood and elsewhere would somehow inaugurate a magical global utopia.

The president has the issue right. Sometimes war is necessary, but only rarely, and then America should fight hard and finish the job.

War is the ultimate big government program, “the health of the state,” as Randolph Bourne put it. War destroys lives, ravages families and communities, eliminates thrift, and undermines constitutional government. The Founders, who got so much right, also understood this point. Which is why they feared a standing army and designed the Constitution to place the power of declaring war — that is, deciding whether the president was authorized to send Americans off to fight — in Congress. At the Constitutional Convention James Wilson explained, “It will not be in the power of a single man, or a single body of men, to involve us in such distress; for the important power of declaring war is in the legislature at large.” Those who risked Americans’ lives and wealth should be accountable to the people.

The horrendous cost of war has been evident over the last two decades. And the price keeps getting higher. For instance, the Watson Institute at Brown University just published a paper on the human displacement caused by conflicts collectively known as “the global war on terror.” It figures that an astonishing 37 million to 59 million people have been forced from their homes, some moving within their own countries, many fleeing to other nations. Noted the authors, “this exceeds those displaced by every war since 1900, except World War II.”

Underlying such mass flight is mass destruction. Even those who return typically find a very different life than before. The study noted, “Displacement has caused incalculable harm to individuals, families, towns, cities, regions, and entire countries physically, socially, emotionally, and economically.” And the pain persists. I have visited refugee camps in Jordan, Lebanon, Sudan, and Thailand. In them people are born and grow up in a world where the future in all its facets is limited, circumscribed, even hopeless.

Obviously, the U.S. did not intend such a result. And there are many players in many of these conflicts. However, Washington started what became a regional conflict and willingly intervened in multiple national wars. The displacement caused by direct, substantial U.S. involvement is enormous: Iraq, 9.2 million; Syria, 7.1 million; Afghanistan, 5.3 million; Yemen 4.4 million; Libya, 1.2 million. This massive carnage achieved surprisingly few positive results.

Other war costs also are substantial. The U.S. was essentially bankrupt even before COVID-19 hit and state governments shut down much of the economy. Yet Washington wasted trillions of dollars on endless wars and nation-building.

Since late 2001, the United States has appropriated and is obligated to spend an estimated $6.4 Trillion through Fiscal Year 2020 in budgetary costs related to and caused by the post-9/11 wars—an estimated $5.4 Trillion in appropriations in current dollars and an additional minimum of $1 Trillion for US obligations to care for the veterans of these wars through the next several decades.

And costs will jump even if all the endless wars ended tomorrow. Crawford explained, “the total budgetary burden of the post-9/11 wars will continue to rise as the US pays the on-going costs of veterans’ care and for interest on borrowing to pay for the wars. Moreover, the increases in the Pentagon base budget associated with the wars are likely to remain, inflating the military budget over the long run.” In this way, as a government bureaucracy, the Department of Defense isn’t that much different from the departments of Housing and Urban Development, Education, Commerce, Health and Human Services, and others.

Even more were injured, some grievously. In Washington, D.C., and at airports I have occasionally seen men with artificial limbs and military haircuts, almost certainly hurt in America’s wars. As harrowing as these experiences were for such casualties, in a sense they were good news: in past wars many of those injured would have died.

Particularly disturbing are the civilian deaths, since Washington was supposed to be saving these people. Of course, the U.S. did not directly target civilians, many of whom were killed by brutal opponents or the inevitable disruptions caused by wars. But American policymakers cannot escape contributory blame. Consider Iraq. The Iraqi Body Count (IBC) figures documented civilian deaths, which ran between 185,296 and 208,295. However, many deaths are never recorded, especially amid a bitter sectarian war in which movement even within a city is dangerous. The IBC suggested that doubling its estimate probably would give a more accurate figure — assume 400,000. They all died in a conflict triggered by America’s disastrous invasion, in violent strife over which they had no say about its initiation or continuation.

These wars also have corrupted America’s military and democracy. The president complained that top Pentagon officials probably “want to do nothing but fight wars so that all of those wonderful companies that make the bombs, that make the planes and everything else, stay happy.” It is an odd charge coming from someone who appears to be maintaining support for the vile Saudi regime’s horrid war in Yemen solely to promote arms sales. Nevertheless, the problem is real.

Shortly after the January 2005 election in Iraq, Fox News brought me on to debate a retired general, whose name I have mercifully forgotten, on the poll’s impact. While the cameras were on he was relentlessly positive and optimistic. When he lights went off he told me about his recent trip to Iraq, during which the “grunts” he encountered said everything was screwed up. He concluded that the best thing for America would be for the newly elected Iraqis to request that we leave. Even I was shocked with his cynicism, his having just moments before lied to the American people about the situation on the ground. But he had a job with a defense contractor and contract with Fox. Telling the truth would have risked both incomes.

Since September 11, 2001, United States military spending has grown rapidly, as has the portion of that spending that pays for military contractors. These contracting companies engineer and manufacture equipment, build and repair infrastructure around the world, provide services like cafeterias and other facilities support, and even replace troops in many war zones. In 2019, the Pentagon spent $370 billion on contracting — more than half the total defense-related discretionary spending, $676 billion, and a whopping 164% higher than its spending on contractors in 2001.
Over nearly two decades, government officials, private companies, and conservative think tanks have sold the idea that military contractors are a cost reducer, yet in reality, the growth in military contracting — or what I call the “Camo Economy” — has actually increased the overall cost of this country’s military operations. It’s a Camo Economy because the U.S. government has used the commercialization (often mislabeled “privatization”) of the military as camouflage, concealing the true financial and human costs of America’s post-9/11 wars. Regarding human costs, in 2019, there were 53,000 U.S. contractors compared to 35,000 U.S. troops in the Middle East. Since the U.S. invasion of Afghanistan in 2001, an estimated 8,000 U.S. contractors have died, in addition to around 7,000 U.S. troops.

Criticizing foolish involvement in disastrous wars is not a knock on those who join the armed services to defend America. The fault lies with their leaders, most importantly with political officials who misuse the military, sending soldiers into unnecessary, even counterproductive, conflicts, and refusing to confront reality and take responsibility. Yet they keep repeating their mistakes, with grievous humanitarian consequences. The best way to support the troops is by holding accountable those who waste American lives, wealth, and credibility.

The president has been correct to criticize the nation’s “endless wars.” If reelected, halting such conflicts should be his top priority. If Joe Biden wins, he should do the same. Whatever happens November 3, conservatives should take the lead opposing the promiscuous war-making that has characterized U.S. foreign policy over the last two decades.