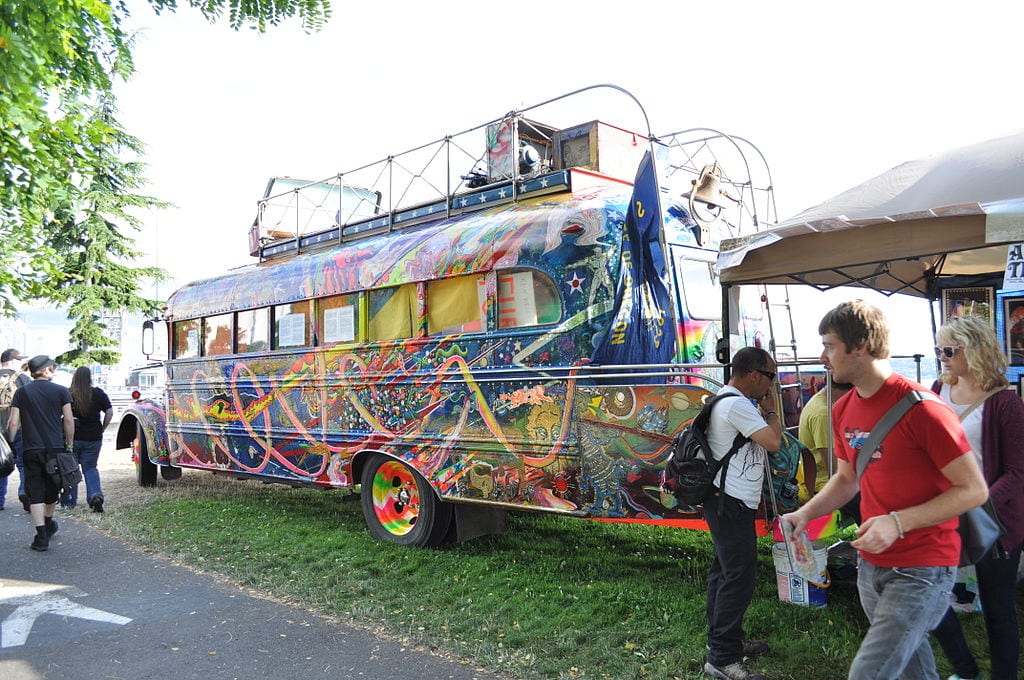 When I was in college, the person I respected most was Ken Kesey. Everything hinges on consciousness. An unexamined life is not living. Kesey’s work was one great, creative exercise in revolutionary consciousness-raising. So it seemed in 1971.

I was well trained in liberal-think by this time. The standard causes of the Left were my causes. It was part of the tribal identity, though it pretended to be anything but tribal.

Kesey was not prepared to take anything as standard that did not hold up to the test of chaos. In the melt-down of accepted reality that he embraced with the Acid Tests, a few things, and a very few, proved strong enough to serve as anchors and foundations for rebuilding a coherent self. He was intolerant of the pretensions of shibboleths, whether of left or right.

In a 1971 interview with Paul Krassner, Kesey followed a thought based on the necessity of respecting life as a moral absolute. When he was talking only about recognizing it among the human jetsam in the chronic ward of an old state psychiatric institution, Krassner was not surprised. But then Kesey began talking about life’s beginnings, as well.

Care of neither the old nor the young can be considered to be punishment for the able, not even the care of the un-dead old or the unborn young. These beings, regardless not only of race, creed, and color but also of size, situation, or ability, must be treated as equals, and their rights to life not only recognized but defended!

This struck me with a bang. As a budding hedonist, I was entirely behind having abortion available as needed. Why should our pleasures be burdened with something we don’t want or intend? Freedom meant freedom from consequence, so that the bubble of pleasure might better be spared a popping.

Kesey didn’t mean this as a hypothesis or as a mooted point. He was passionate, and the words poured directly from a deep commitment to bringing to the fore a transformative awareness of the core of human worth and the miraculousness of our existence:

The virile sport in the Mustang driving to work with his muscular forearm tanned and ready for a day’s labor has not one microgram more right to his inalienable rights of life, liberty, and the pursuit of happiness than has the three month’s fetus riding in a sack of water or the vegetable rotting for twenty years in a gurney bed.

He was speaking the truth. He followed it radically, as he believed it demanded. In doing so, he gave a radical answer to mere hedonism and mere egotism masquerading as revolution. Because realizing there was incredible miraculous life in a forgotten “vegetable” in the chronic ward brought him to the point where enjoyment and responsibility come together. The knockout miracle of life can only be enjoyed through accepting the responsibility of defending it. To deny that life, he said, is nothing “but fascism again, back as a fad in a new intellectual garb with a new and more helpless victim?”

I use Kesey as standard of measurement for true revolutionaries.

With most revolutions, it is sort of like what Pete Townshend taught: “Meet the new boss, same as the old boss.” Sort of like, because with depressing regularity, the new boss is far worse. Robespierre’s terror was greater than that of any Bourbon king; Lenin and Stalin authored far more human misery than any Tsar; Hitler was far worse than Torquemada.

The excesses of the radical organizers of today’s unrest are no different. The grotesquely predictable excesses they display whenever they have the power are soul-chillingly cliched. Their own unawareness of their predictability makes them the stuff of nightmare: does that really reflect the nature of the humanity I share with them?

I’m glad I got to know a real-deal revolutionary. I have not given up on change, in no small measure because of that. Kesey pushed on to the place where what is eternally true and what must be eternally new unite. We must radically disavow evil; nothing half-hearted will do. Our most deeply enduring principles, carefully conserved by the dedication and sacrifice of millions, lead us to the same conclusion.

No need ever to be fooled again. The great wave of revulsion after the atrocity of George Floyd’s murder must turn into a powerful resolution to change. Kesey keeps teaching me that that miraculous ability to change is itself only kept alive if we consciously embrace the responsibility to all life with which it is intertwined. Our constant vigilance, our refusal to confuse the newest mutation of fascism with our true ideal, is all that keeps our freedom alive.