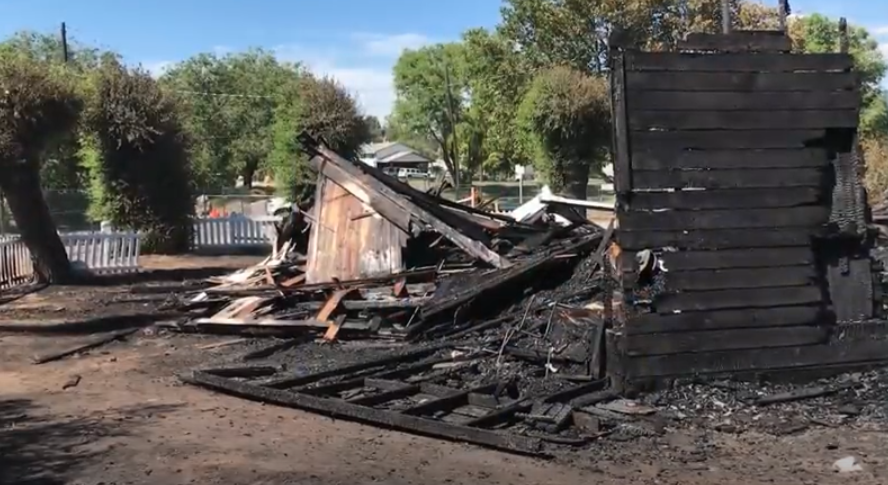 Multiple churches and statues have been damaged and destroyed in recent weeks in Canada in what appears to be a massive campaign of vandalism and arson. These developments follow the discovery of 751 unmarked graves of indigenous Canadians in a residential school in Saskatchewan and 215 similar unmarked graves in a residential school in British Columbia in May. While the identities and circumstances of death have yet to be determined, some children at these residential schools experienced poor health conditions and even physical and sexual abuse by their teachers. Canada housed approximately 150,000 indigenous children at these schools between 1863 and 1998.

Canadian Prime Minister Justin Trudeau uses the arson and vandalism as opportunities to wax poetic about the flaws of Canada’s past, thereby laundering violence as legitimate political speech.

Several indigenous leaders have categorically condemned the destruction of property. On the other hand, Canadian Prime Minister Justin Trudeau uses the arson and vandalism as opportunities to wax poetic about the flaws of Canada’s past, thereby laundering violence as legitimate political speech.

Fire has destroyed at least 10 Canadian churches and damaged at least 11 more. Many of these are suspected arson attacks targeting churches on or near indigenous land. Other churches have been vandalized by other means:

Many indigenous leaders have made statements categorically condemning the arson. Jenn Allan-Riley, an assistant minister at Living Waters Church in Vancouver, said, “We’re here to basically ask people to basically quit burning down churches. We’re concerned about the burning and defacing of churches bringing more strife, depression and anxiety to those already in pain and mourning.”

A spokesman for the Dene Nation said that arson “is not the Dene way” and that “violence is not the way to deal with injustice.” Chief Clarence Louie of the Osoyoos Indian Band said, “Many residential school survivors hate the church with a passion — but I have never heard any of them ever suggest people turn to this … I talk to a lot of residential school survivors and, sure, there is a lot of hatred and bitterness and anger — but that still doesn’t mean you go and do arson.”

In the National Catholic Reporter, Chief Louie was quoted as saying, “Obviously, it’s the same group of people. Why did they do it under the cover of darkness? Because it’s a criminal act and they are criminal.” The Penticton Indian Band also said they, along with the Osoyoos Indian Band, “are in disbelief and anger over these occurrences, as these places of worship provided service to members who sought comfort and solace in the church.”

But while indigenous leaders are forceful in their condemnations of the alleged arson, Prime Minister Trudeau’s statements fit more into a “arson is wrong, but … ” category, taking Rahm Emanuel’s advice to “never allow a crisis to go to waste” or President Barack Obama’s penchant for “teachable moments” and preaching a narrative of social justice in response to the destruction.

Yes, Trudeau condemned the alleged arsons earlier this month as “unacceptable and wrong.” But after a dramatic pause, in the very next sentence, Trudeau said he “understand(s) the anger that is out there against the federal government, against institutions like the Catholic Church. It is real and it is fully understandable given the shameful history that we all are becoming more and more aware of, and engaging ourselves to do better as Canadians” (my emphasis). Trudeau also said that while

we shouldn’t be lashing out at buildings … we should be, every day, committing ourselves, each and every one of us, to the hard work we need to do to actually rebuild a path forward that reflects the terrible intergenerational trauma and present day realities of suffering that we are all collectively responsible for.

Who knew that arson could teach Canadians to be better citizens?

The anger … is real. People have gone decades and even generations living with intergenerational trauma, with outcomes and institutional racism that has created extreme difficulties for Indigenous peoples across this country that are also the legacy of residential schools.

Trudeau should both categorically condemn the arson and categorically support a fact-intensive inquiry into any and all injustices committed by Canadians to their indigenous brethren. But he should do both separately. By mashing these two messages together and devoting more time to addressing past injustices than present arson, Trudeau carries water for the arsonists. Trudeau gives the arsonists a legitimate political voice, thereby enabling arson, a heinous criminal act, as a means to achieve political ends.

Trudeau has followed a similar tactic in response to groups of vandals destroying at least three statues in Canada and defacing a fourth. On July 1, a statue of Queen Victoria was defaced with red handprints, then torn down and decapitated, and a statue of Queen Elizabeth was also torn down, both in Winnipeg, Manitoba. That same day, rioters tore down and tore apart a statue of Captain James Cook and threw the pieces into Victoria’s Inner Harbour in British Columbia. On June 26, a statue of Pope John Paul II at the Holy Rosary Catholic Church in Edmonton, Alberta, was defaced with red handprints.

Trudeau made more “vandalism is bad, but … ” comments following the topping of statues of Queen Victoria and Queen Elizabeth, similar to those on the alleged church arsons. When asked if he condemned the toppling of these statues earlier this month, Trudeau responded,

Vandalism, arson, destruction of public property is not the way to move forward as a country. I fully understand the anger … and the grief that so many people are feeling, particularly with [the] discoveries of gravesites across the country from residential schools. But we need to move forward as a community. We need to listen to that anger, to that grief, and make reflections around how we commemorate and honor historical figures, and whether we do. But at the same time, the hard work of reconciliation comes from rolling up our sleeves and working together on a better path forward, and that is what I have consistently called for and will continue to. (My emphasis)

Again, an investigation into how Canadians treated their indigenous brethren is warranted. But by conflating this message with a muddled “vandalism is bad, but … ” message, Trudeau mainstreams vandalism.

It is likely that Canada will face more arson and vandalism, given that its prime minister is enabling such violent behavior with his statements. More broadly, the mob is poised to forever change Canada’s national identity. The alleged church arsons and statue defacements have strengthened calls to cancel Canada Day (observed on July 1). Such calls will likely grow louder, and several communities in British Columbia, New Brunswick, and Northern Saskatchewan have already canceled Canada Day this year. Will Canada Day be eclipsed by a new annual national day of truth and reconciliation, which Canadians will first observe this September 30? Hopefully level heads, law and order, and a nonpartisan, fact-intensive investigation into Canada’s past will prevail.