Late at night here in Rancho Mirage. Alex is fast asleep and the dogs are alternately sleeping and then awakening and licking themselves and then going back to sleep.

The world is falling apart. A monster truck plows into shoppers in Berlin, killing at least 12. The German officials wonder if it’s possibly terrorism. A gunman kills the Russian ambassador to Turkey right on camera. He’s shouting about Russian atrocities in Aleppo as he squeezes the trigger. In Zurich, a madman shoots three men in a mosque.

The virus of Islamic terror replicates and spreads around the world. Soon, the ultimate terrorist nest of vipers, Iran, will have nuclear bombs. They’ll use them against Israel, God forbid. Does Israel have a Doomsday Device that will go off and poison and kill the whole human race if there is another Holocaust? I’ll bet they do and who can blame them?

In America, on TV, Michelle Obama whines about how there is no hope now that Trump has been elected. Pretty good. She’s basically got the speaking and thinking skills of an eighth grader and she’s First Lady and went to Princeton. And she came out of nowhere to be First Lady. And she’s complaining.

Don’t get me wrong. Blacks have been horribly mistreated in America for a long, long time. Slavery, rape, murder, horrifying repression. These were mortal sins committed by our nation. Blacks have every right to feel conflicted about America. But Michelle Obama? Who rode white embarrassment over racism into the White House is complaining? That’s pretty rich. I hear she took Air Force One to Hawaii right after the interview. No doubt that, too, is part of her suffering.

Race is a huge factor in life. People aren’t allowed to admit it anymore, but if you scratch just a little bit, you get to seething anger. The blacks are angry that they just can’t seem to get anywhere. The whites are angry that the blacks commit crimes at a rate far in excess of whites, demolish schools and neighborhoods, and often turn to drugs and alcohol. As far as some whites are concerned, blacks are the problem, not the victim.

People don’t like to be pushed around and whites feel as if they’re being pushed around by non-whites. They’re angry. Mr. Trump never said one word against blacks. He begged for their votes. But it’s always been clear that, unlike Barry Obama, he’s thinking of the forgotten man. In 2016, that’s the white factory man, as many people see it.

There’s too much race anger right now. The Obama administration did nothing to defuse the anger. In fact, Obama whipped up anger over race whenever he could and he’s still doing it. He’s joined by the New York Times. Every day, they have stories designed to make black people feel not just conflicted but furious. (I wonder how many blacks read the New York Times…) The whole left is bent on stirring up racial hatred. Trump made it clear that he cared about the white man, but he said not one syllable against the black man. The “social justice” movement is entirely about race hate. Nobody else will tell you. I just did.

How long can America take it?

Overseas, America is a joke. From overwhelming strength eight years ago to a pitiful wheezing scold screaming at mighty Putin, riding by on his horse. We are just irrelevant now in the Middle East, a tail being wagged by the Russian bear.

I think Trump will stop that. He’ll certainly stop Obama’s contempt for Israel. How do so many Jews love Obama when he mocks and belittles Israel? What kind of craziness is going on there? Jews are really interesting people. They (we, because I am a full scale Jew) consistently back causes and people who hurt us. Why? It has to be some kind of sickness.

Well. I can’t figure it out. I know I had great parents. I know I have the world’s greatest wife and sister. I get to have pizza any time I want it. I have air conditioning. Every night, I get to watch my DVD of Casablanca. Even the Nazis in Rick’s Café Américain are witty, laugh a lot, and have exquisite manners. Ingrid Bergman is not as beautiful as Alex, but close. Humphrey Bogart is not afraid to die, but he cannot take rejection in love. The story has a wild finish. Julie, my German short-haired pointer dog lies with her head on a pillow with a Confederate flag on it — a gift from a Deep South in-law long ago. Everyone in this house hates even the thought of slavery and repression, but the dog loves to lie on the pillow. 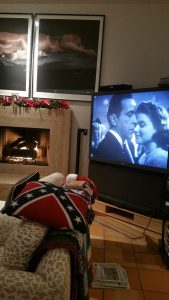 This morning, I swam in my pool and overhead, a perfect chevron formation of geese flew northward. The formation was an exact extended “V.” In the afternoon, I went to visit a friend with a serious lung ailment. He has a beautiful daughter, a handsome son-in-law who’s going to be a cop, a wife, and a dog. He’s living in America. He always calls me “young man,” by which he means old man. We’re the same age.

It’s midnight. I’m going swimming in my pool in America. I can’t figure anything out. Might as well swim under the stars and the contrails.

Ben Stein
Follow Their Stories:
View More
Ben Stein is a writer, actor, economist, and lawyer living in Beverly Hills and Malibu. He writes “Ben Stein’s Diary” for every issue of The American Spectator.
Most Popular
1
Arts and Letters
The Ally of Executioners: Pushkin, Brodsky, and the Deep Roots of Russian Chauvinism
by Matthew Omolesky