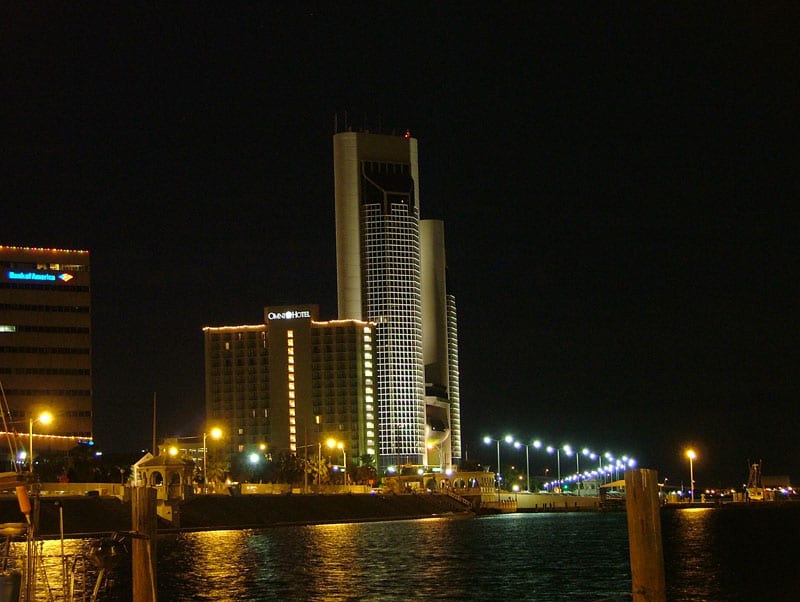 An uneventful flight from LAX to DFW until the very end. When I got off the plane, there was supposed to be a cart to help with my fat old self, my bum left foot, and my luggage. However, there was no cart and no helper.

Plus, for some reason having to do with the change of pressurization between the airplane — an immense 787 — and the D terminal at DFW, I could hardly breathe. I was scared. It’s not fun to be 73, far from home, with luggage and the need to go to a connecting gate a LONG way away. I pleaded with the gate agent to get me a cart and he did request one three times. But no one appeared. Finally, my pal and helper, Bob Noah, showed up. He rushed all about to find us a cart but there was no cart to be found. At DFW, one of the major airports on this earth.

Luckily, a man showed up with a wheel chair. He was a Somali, but cheerful and capable and did not seem to have any animus against me, an American and a Jew.

He took me, with Bob following close behind, to a TGIF, where I had some ribs (not anywhere near as good as usual). Then we got on a Regional Jet for my final destination of the night, Corpus Christi. The flight was mercifully brief but I noticed we came to a short stop in Corpus. The pilot came on the PA system and mournfully told us that the plane had lost control of its landing wheels and all of its hydraulics. BUT! Not to worry! A tractor would come soon to bring us to our gate.

It was midnight and I wondered how long that tractor would take. To my delight, it came within about twenty minutes and hurled us to our gate. A hustling AA employee by the name of Heather lassoed a wheelchair for me and soon we were at the curb. By the time we got to our hotel, with giant road construction everywhere, it was almost 2 a.m. But it was a jolly car ride. We passed by many oil refineries with their gaily lit equipment and it was like passing a forest of Christmas trees.

My room at the Omni was large and uplifting. I watched Fox News while I took my night time meds. I wish I knew who Bruce Ohr is. His name keeps coming up and I just refuse to look at Wikipedia for him. Oh, well. Maybe I will. (I did and I still don’t know what he has to do with anything.)

I had a sandwich and then a long shower and then to bed. I did not like the business about the broken hydraulics. Not one bit.

Most of the day, I slept. I had a few interviews about my speech the next day. It’s for Bay Area Citizens Against Lawsuit Abuse, an excellent topic indeed. I know it well because I have been on both sides of it.

That evening, the top dogs of BACALA (the “Bay” refers to Corpus Christi Bay, of course, a tropical paradise of sea water and oil refineries and palm trees endlessly waving in an endless wind that literally NEVER stops) and I had dinner and talked about the state of the world. Now, I have been wondering for years if there are any sane people left in this world. There are. In BACALA. These are men and women who actually do things: collect solid waste, help babies be born, refine oil, build buildings. These are the backbone of the country. They are incredibly polite, intelligent, and articulate. I left the table feeling well satisfied.

Before I got into bed I had a visit from my war hero friend, S/Sgt John Quinones. He brought his charming two teenage kids with him. John was deployed at least three times. Then he got injured and was retired. He’s an impressive guy. Again, the backbone of a nation.

Before I retired, I had a flurry of texts from a tall, lovely Russian woman I had met at Mr. Chow some weeks ago. “You want to be my boyfriend?” she asked.

I didn’t answer. I was too tired.

The next text asked “Are you have privet jet?”

“No,” I said, “and I’m married and I cannot conceivably afford a private jet.”

I didn’t get any more texts from her after that.

Up and at ’em for my speech. The audience was lively, politically hip, and appreciative of my efforts. I had written an entirely new speech for them and they loved it and me. That really sets me up and lifts my mood.

I had lots of great lawyer jokes, too, thanks to my brilliant college roommate and expert on evidence, Arthur M. Best, and my gorgeous and thorough assistant and researcher, Ryan. It all worked out great.

A long nap and then off to CCI, the local airport. It was deserted and very easy to work with. We changed planes in Dallas. My incredibly loyal and brilliant helper, Bob Noah, stayed with me until my plane left. That meant he missed his plane to DC and had to stay over. I was extremely touched.

At DFW, I stopped for a Big Mac at the D gates’ McDonald’s. It was totally yummy. All fun. All yum.

Lucky for me, because on the flight from DFW to LAX there was no food at all except for a few nuts and a cookie. A first class flight of some 160 minutes and no dinner. Incredible. American Airlines are covering themselves in mud on this trip.

I was on the aisle in the last row of First Class, seat 4D. Across the aisle from me was a staggeringly beautiful girl in black tights and a crop top shirt and long blond hair. She had perfect Nordic features and was basically a goddess in terms of looks.

Not very talkative, though. I pried out of her that she was a grad student at USC. That she was going to work in marketing. And finally that she was from a wealthy family of jewelers (but definitely not Jews) at whose store in London my dear friend Linda Fairstein used to shop.

I would normally have chatted her up for the whole flight but she was absorbed watching a movie. She obviously had zero interest in me, and so I let her slide into her 21-year-old Kappa rich girls’ beach volleyball life.

I read my Wall Street Journal. It had a story about some madman who had gone to the trouble of restoring a 1955 light blue four-door Chevy 6. It struck a chord because my father owned that precise car and HOW I HATED IT. Ugly. No air conditioning. Slow. Cheap and crummy looking. I don’t think the heiress to a famous jewelry company would be interested in it. To go to the trouble of restoring it is like going to a lot of trouble to restore a dead squirrel.

Still, I was thrilled that there even existed anyone as beautiful as the girl across the aisle from me. I am surrounded by beautiful girls, just mobbed by them (I employ them to run errands). But this girl was really from the master race.

She rather sweetly said good night to me as we left the plane. My greeter, Al, almost 80 years of age, told me that his mother had been a White Russian who had fled the Reds at age 12 on horseback, riding to China. Somehow she then made her way to French North Africa, where she met Al’s Dad, a soldier in the French Foreign Legion. And here is Al, greeting this fat old man (me) at LAX at midnight. What lives people lead.

Friday
Let me tell you a few things:

I’ve been spending many meals at Mr Chow, a fabulous Chinese restaurant in Beverly Hills. It’s BY FAR my favorite café in LA. Très chère but worth every centime.

For bargain sushi, you must eat at The Sushi Stop. On Sawtelle just south of Pico. Heavenly and incredibly inexpensive.

I have now watched some or all of The Lord of War roughly 100 times. It grabs me and pulls me in. It’s starring Nick Cage, Jared Leto, Bridget Moynahan, and Ethan Hawke and it’s got a superstar cast of mad killers from Liberia, especially Eamonn Walker, a spectacular acting genius. Watch it over and over.

I’ve now watched The Death of Stalin twice. It is a comedy about the death of the worst killer of European history, and really really clever.

Meanwhile, all of those pretty girls are nothing compared with my wifey. And I am terrified. Most nights I just sit in a rocking chair and watch her sleep. I’m grateful to be able to do it.