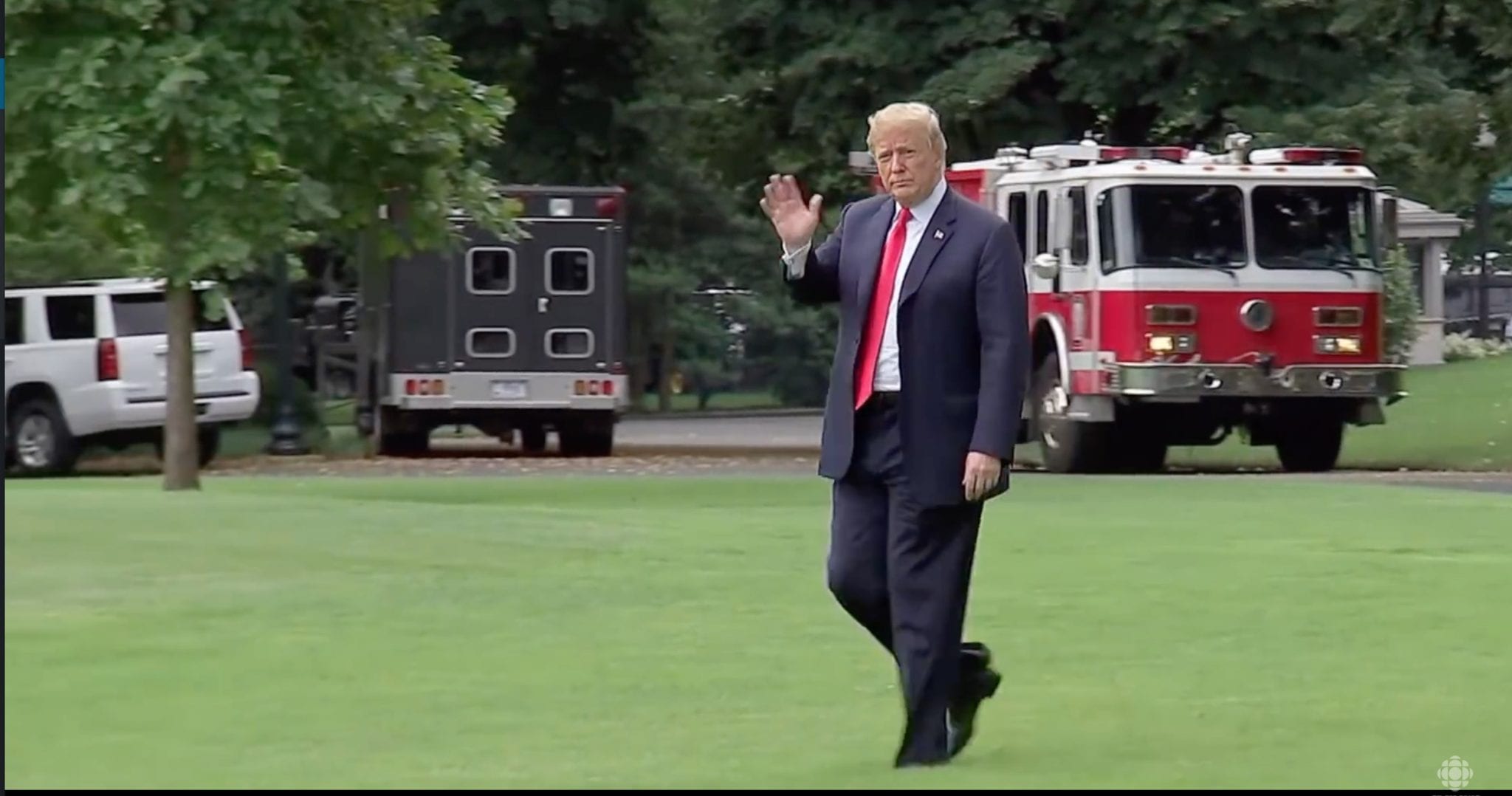 Give President Donald Trump his due. In the midst of super-charged campaign, he convulsed the public debate over a seemingly settled issue, birthright citizenship. Despite the angry, even shocked response, the issue deserves debate. Although the president cannot change the law via executive order.

Today anyone born in the U.S., with minimal exceptions (children of foreign diplomats), becomes a citizen. That has created a reward for people who enter the U.S. illegally. There is even an organized practice of “birth tourism.” Chinese firms have advertised the opportunity.

The practice also contributes to the unhealthy political dynamic surrounding the immigration issue, turning almost any reform debate into political Armageddon. Absent citizenship, Washington can admit people to live and work in America without particular concern over their political beliefs and philosophies. In contrast, granting citizenship is permanent and empowers recipients to directly transform American society.

So in the midst of an angry debate on immigration, birthright citizenship deserves a look. How do we decide who becomes a permanent member of the American polity?

There is no simple answer. Presumably citizenship should be based on some attachment to the U.S. Countries do it differently, most often tying it to citizenship of the parents. Only about 30 nations have “birthright” citizenship, based on birthplace.

Most countries require at least one parent be a citizen, set residency requirements for the child, or impose other conditions. Thus, if a pregnant American heads over to Italy, Germany, or France, she won’t return with a ticket to EU citizenship. Her baby will be American—based on parents’ citizenship, not child’s birthplace.

Belief in generous legal immigration doesn’t necessarily mean an automatic or easy citizenship. The issue is especially challenging to those who support a free society. It seems fair to expect broad support for a generally liberal, democratic order. In contrast, a partisan political test for individuals would be inappropriate, even “un-American.”

However, what if the citizenship process seems biased toward those whose views are more likely statist? In this case, what if the children of folks who enter America illegally are more likely to vote against the principles of the American founding? Should they be accepted en masse into America’s core political community? Or should the system be adjusted to promote a different political balance? Fear of adding millions of potentially unfriendly new voters generates much of the opposition to increasing legal immigration and granting citizenship to those now in America illegally. Such worries transcend ethnicity and should not be dismissed as bigotry.

America’s policy of birthright citizenship stems from the 14th Amendment, one of the post-Civil War measures, ratified in 1868, which states: “All persons born or naturalized in the United States, and subject to the jurisdiction thereof, are citizens of the United States and of the State wherein they reside.”

A policy of jus soli, or right of the soil, as it is known, has the advantage of clarity and avoids the potential of large foreign, effectively stateless, populations developing over the years. Messy, even violent controversies have developed over the status of peoples in nations as diverse as the Dominican Republic (Haitians) and Burma/Myanmar (Rohingya). The Gulf States are known for having massive expatriate populations, much larger than the number of citizens, who possess limited legal and minimal political rights.

However, the jus soli has significant downsides as well. Citizenship is separated from attachment, which might be nonexistent. One’s child may become a citizen even if one has no affection for or connection to America and merely is passing through. Worse, the standard allows people to game the system. Make your kid a citizen for your own advantage.

Michael Anton of Hillsdale College called birthright citizenship “an absurdity — historically, constitutionally, philosophically and practically.” That is a dramatic overstatement, but the practice is not the most obvious default either. If the U.S. could provide citizenship for everyone on earth, standards would not matter. But if Americans are not prepared to do so — and that seems, well, highly unlikely, to put it mildly, in the current political climate — they must make choices. Assume there is some practical limit to the number of people likely to be granted citizenship: might it not be better to accelerate acceptance of, say, long-term Green Card holders, or some other category of applicants, instead of everyone born in America, irrespective of circumstance?

Americans in 1868 never imagined how the amendment would be used. It was approved to overturn the awful Dred Scott decision, which denied citizenship to slaves, and protect the Freedmen, guaranteeing their citizenship no matter what future Southern governments might desire. The meaning of the main clause is clear, but the jurisdiction restriction is less so.

Excepted by contemporary policymakers were children of diplomats and Native Americans. Children of foreign invaders, Americans were assured, also would not be offered citizenship. But legal aliens were accepted, an interpretation affirmed by the Supreme Court in 1884. It takes a strained reading of the provision to exclude foreigners who entered the U.S. under the rules established by Washington and voluntarily placed themselves under the jurisdiction of U.S. legal and political institutions.

Not covered, however, was the status of illegal aliens. America’s borders then were essentially open. Thus, there were few children of illegal aliens to become citizens. Even after restrictions were imposed, the number of illegal immigrants remained modest. The 1986 immigration legislation made it more difficult for people to travel back and further across the border, encouraging Mexican migrants, in particular, to bring their families and stay, creating a semi-permanent, family-heavy illegal population. Which meant more children of illegal aliens, overall roughly a quarter of a million annually, granted citizenship.

Obviously, even those here illegally are subject to U.S. law. However, it could be argued that they essentially defied U.S. jurisdiction by coming, so the necessary mutual consent is lacking. The majority of legal scholars go with the first, simpler interpretation. Congress nevertheless could vote to eliminate or limit birthright citizenship, triggering a likely Supreme Court contest. (The president can change neither the Constitution nor the law unilaterally, only the executive branch’s interpretation thereof.) If the Court affirmed full birthright citizenship, a constitutional amendment would be required — a tough, though perhaps not insuperable, requirement if developed as part of a larger immigration reform package.

Changes in immigration law will come only with great difficulty and tough compromise. One could imagine a grand bargain of sorts: increased legal immigration, tougher border controls, work permits rather than citizenship for those currently here illegally, and conditioning/limiting birthright citizenship. For the latter, Washington could require some evidence of connection: legal, extended (e.g., not tourist) presence of child and/or parents, military service, positive action to assert the “birthright,” or some other equivalent. The intention would be to emphasize a candidate’s connection to America, end accidental and incidental citizenship, and thwart efforts to game the U.S. immigration system. The issue should be viewed more as a matter of prudence than principle.

All nations limit citizenship. There are no obviously right criteria for doing so. Despite the reaction against the president’s musings, birthright citizenship is neither pro- nor anti-immigration. Indeed, limiting citizenship would make it easier to allow more foreigners into America. Which makes it a perfect issue for compromise in attempting to resolve the many contentious aspects of the immigration debate.

Citizenship matters. For a century and a half being born in the U.S. was enough. But circumstances change. Maybe birthright citizenship is no longer the best policy. Whether you like or dislike the president, he again is pushing for people to rethink once settled policy. For that he deserves credit.

Doug Bandow is a Senior Fellow at the Cato Institute and former Special Assistant to President Ronald Reagan. A graduate of Stanford Law School and member of the California and D.C. bars, he is the author of The Politics of Plunder: Misgovernment in Washington.