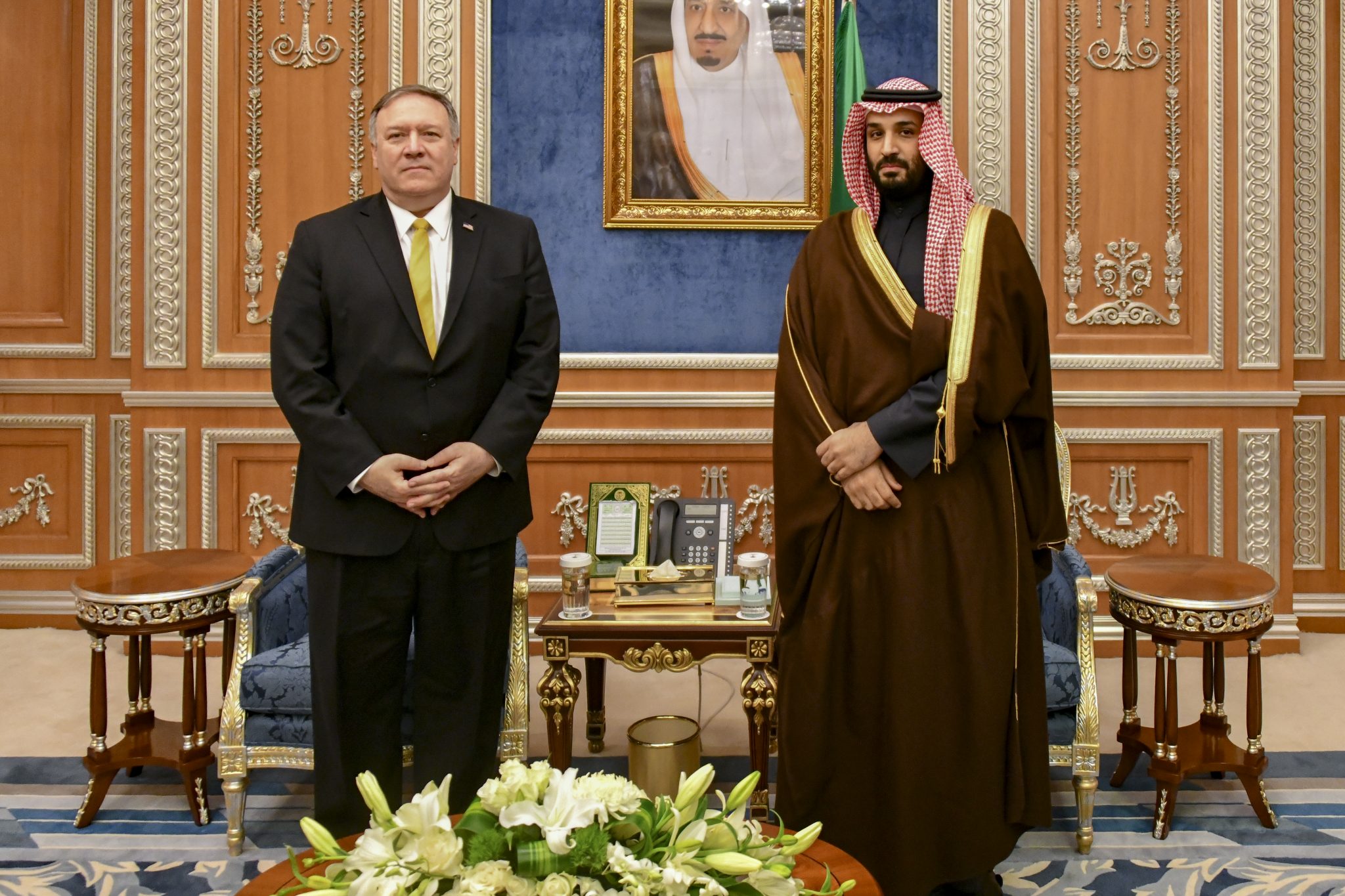 Schadenfreude seems inconsistent with the notion of Christian charity. But could there be a more appropriate and justifiable emotion when watching the Saudi royals deal with austerity? Crown Prince Mohammed bin Salman will find it harder to buy a bigger yacht, fund additional jihadist groups, and launch additional murderous wars. My tears are about to flow.

Indeed, one of President Donald Trump’s greatest mistakes was to attempt to push up oil prices to save the domestic shale oil industry. The assets won’t disappear, and as the major firms enter the field industry staying power will increase.

More importantly, consumers would benefit from a break as government crashes the economy. Low energy prices would provide a boost as industries begin to reopen.

The crown prince, who dropped more than a half billion dollars on his yacht, almost as much, it is believed, on a Leonardo da Vinci painting, and some $350 million on a French chateau, sees money as the solution to his defense problem.

Most important, though, is depriving hostile regimes of revenue. Iran, Russia, and Venezuela come to mind. So does the Kingdom of Saudi Arabia (KSA). Contrary to Washington’s long bipartisan presumption that the KSA is an ally, it threatens American values and interests.

Indeed, the Kingdom makes an interesting contrast with Iran. Secretary of State Mike Pompeo routinely attacks the Islamic Republic for its terrible human rights violations, which are severe. But he says nothing about the Saudis, who are much worse.

The Kingdom is a true totalitarian tyranny. There are no elections; Crown Prince bin Salman seems as sure as China’s Xi Jinping to rule forever. Just like Xi, MbS, as the Saudi heir is known, uses anti-corruption campaigns to mulct, cow, and destroy his enemies. Nor is there freedom of expression in Saudi Arabia. Like Xi, MbS has tightened internet and media controls, tossed more people into prison, cracked down on activists calling for reform, and kidnapped his critics from abroad.

Reading human rights assessments of the land of the Saudi royals is painful. Freedom House observed that “Saudi Arabia’s absolute monarchy restricts almost all political rights and civil liberties.” The KSA was decidedly not free, collecting just one out of 40 possible points in the category of political rights. Not many countries are lower. The Kingdom seems like a civil libertarian paradise in comparison, gaining six of 60 possible points.

It must be painful for the State Department to issue its 58-page human rights report on Riyadh, which is never mentioned by Pompeo. America’s ally is responsible for the following:

Other than that, everything is great. Unless you get kidnapped and imprisoned. Or visit a consulate and are murdered and chopped up. Not that such conduct seemed to bother anyone in the administration.

Human Rights Watch (HRW) has a different perspective but comes to a similar conclusion: “The authorities escalated repression of the rights to freedom of expression, association and assembly. They harassed, arbitrarily detained and prosecuted dozens of government critics, human rights defenders, including women’s rights activities, members of the Shi’a minority and family members of activists.”

Admittedly, the crown prince has relaxed the Kingdom’s notorious social controls, which until recently completed a totalitarian state. But he has accompanied that liberality with greater repression elsewhere. HRW explained that “Saudi authorities stepped up their arbitrary arrests, trials, and convictions of peaceful dissidents and activists,” including of the very women’s rights advocates who pressed for many of the social reforms that he implemented. That is, as he granted their demands while arresting them. He wants to ensure that no one else makes the mistake of challenging him over anything.

Amazingly, there is even less religious liberty in the Kingdom than in either Iran or China. Not one church, synagogue, or temple operates in Saudi Arabia. Christians and other religious minorities who seek to worship together outside of business and diplomatic enclaves can be arrested and either imprisoned or deported. In contrast, in both China and Iran religious believers do meet, while facing severe persecution. The latter even hosts a small Jewish community. Not the Kingdom. Thou shalt be Sunni Muslim and listen to clerics paid to order obedience now and forever to the al-Sauds.

The U.S. Commission on International Religious Freedom rated Saudi Arabia in its bottom category, Countries of Particular Concern. The Commission explained that the KSA “continued to engage in other systematic, ongoing, and egregious violations of religious freedom. The government prohibits public practice of any religion other than Islam, and no houses of worship other than mosques are allowed in the kingdom. Non-Muslims who gather in private houses are subject to surveillance and Saudi security services may break up their private worship services.”

Despite MbS’s carefully cultivated image as a reformer, his government continues to train young Saudis to be extremists. USCIRF added, “For more than 15 years, USCIRF has documented the Saudi government’s failure to address intolerant content in official textbooks sufficiently. Despite progress in recent years, Saudi textbooks have seen some backsliding regarding language inciting hatred and violence toward non-Muslims.” These materials are used in madrassahs around the world, including in the Islamic State’s short-lived schools.

The State Department’s latest assessment of religious liberty in Saudi Arabia runs 21 pages. The administration admitted that there is not even the pretense of liberty to worship God:

Freedom of religion is not provided under the law. The government does not allow the public practice of any non-Muslim religion. The law criminalizes ‘anyone who challenges, either directly or indirectly, the religion or justice of the King or Crown Prince.’ The law criminalizes ‘promotion of atheistic ideologies in any form,’ ‘any attempt to cast doubt on the fundamentals of Islam,’ publications that ‘contradict the provisions of Islamic law,’ and other acts including non-Islamic public worship, public display of non-Islamic religious symbols, conversion by a Muslim to another religion, and proselytizing by a non-Muslim.

Amazingly, Saudi Arabia’s foreign policy is even worse than its domestic practices. The fixation on Iran has distorted the administration’s treatment of the Kingdom. Tehran is a weak state, with no effective ability to strike at the U.S. except for American forces in the Middle East. Washington does not need dubious allies like the Kingdom for protection against Iran.

Instead, the KSA, despite its pretensions of power, is the supplicant, seeking to buy bodyguards, just like it buys most ever other service. It has spent massively on the military: Riyadh’s $83 billion expenditure in 2018, much of it on U.S. weapons, put it at No. 3 in the world, ahead of Russia. Yet its military is a pitiful vanity force. Yemen’s Houthi irregulars have regularly embarrassed the royal legions.

Which should surprise no one. Who wants to die for the licentious, libertine royals? Who finds life’s greatest satisfaction kowtowing to an absolute monarch who chops up his critics? Who sees any reason to work hard in defense if no one works hard in any other job? So the crown prince, who dropped more than a half billion dollars on his yacht, almost as much, it is believed, on a Leonardo da Vinci painting, and some $350 million on a French chateau, sees money as the solution to his defense problem. He treats American military personnel as mercenaries, spending enough money on U.S. goods to convince politicians to provide de facto bodyguards. As former Defense Secretary Robert Gates warned, the Saudis always desire to “fight the Iranians to the last American.”

Certain, at least until recently, in Washington’s protection, the irresponsible, reckless, and foolish crown prince has done more to destabilize the Middle East than Iran. He launched an invasion of Yemen to put a malleable client back in power, igniting a sectarian battle along the way. Until Riyadh’s attack, Iran had only limited influence over the Houthi movement. The KSA’s aggression created a humanitarian disaster and empowered al-Qaeda in the Arabian Peninsula, along with other radical groups.

MbS kidnapped Lebanon’s prime minister, forcing the latter’s resignation — which was withdrawn the moment the man was freed. The Saudis underwrote Abdel Fattah al-Sisi’s coup in Egypt; the general turned president is more repressive than Hosni Mubarak and risks sparking another popular explosion as a result of pervasive brutality, corruption, and injustice. The Kingdom even used troops to support another authoritarian Sunni monarch, this one in Bahrain, which hosts a U.S. naval base. The much-abused Shia majority there makes for another unstable tyranny.

Riyadh backed jihadist insurgents in Syria, including enemies of America. The Kingdom intervened in Libya’s civil war, as well. And MbS launched diplomatic and economic war against Qatar, seeking to turn Doha into a puppet regime, dividing the Gulf States: the United Arab Emirates and Bahrain are against, with Kuwait and Oman seeking to remain neutral. This is a record of extraordinary irresponsibility. With friends like this, the U.S. is better off with enemies.

MbS’s regime desperately deserves less money. A lot less. The good news is that tough times are likely to happen, despite the president’s unfortunate attempt to bolster the energy market. The New York Times reported, “Not only is the coronavirus redefining daily life for Saudis, but plummeting oil prices are robbing the kingdom of the enormous wealth that was underwriting the new Saudi Arabia. The twin blows threaten to sink Crown Prince Mohammed bin Salman’s sweeping social and economic agenda, and have already curtailed the vast welfare state that has given most Saudis a comfortably subsidized life.”

With friends like this, the U.S. is better off with enemies.

This couldn’t happen to a nastier corrupt thug. He might even have to stop slaughtering civilians in Yemen.

Actually, another possible effect that would be even better. Sanctions advocates routinely try to impose economic hardship, encouraging people to revolt. It hasn’t worked anywhere yet, but hope breeds eternal.

Perhaps the KSA will be the first successful case. Falling oil prices operate in much the same way as sanctions. As the Times noted, “Saudis long accustomed to generous fuel and electricity subsidies, cushy government jobs and free education and health care may live far less comfortably than previous generations did, rewriting the relationship between Saudis and their rulers.” Maybe they will decide it’s time to stop letting the royals grab the cash first and take a huge cut before sharing anything with everyone else.

For years, decades actually, presidents abased themselves in Riyadh, desperate to ensure a steady oil supply. Yet the royals always had to sell the oil. Otherwise they would have no money for personal luxuries or public subsidies. Today Washington no longer needs to worry about access to Saudi oil. U.S. officials should remove the “kick me” sign they routinely wear when meeting Saudi leaders.

And Americans should enjoy the spectacle of hard times hitting Riyadh. MbS has spent his entire reign spending money for ill. It is time for him to finally do without. Maybe the Saudi people will eventually do without him.

Doug Bandow is a Senior Fellow at the Cato Institute. A former Special Assistant to President Ronald Reagan, he is author of Foreign Follies: America’s New Global Empire.
Print