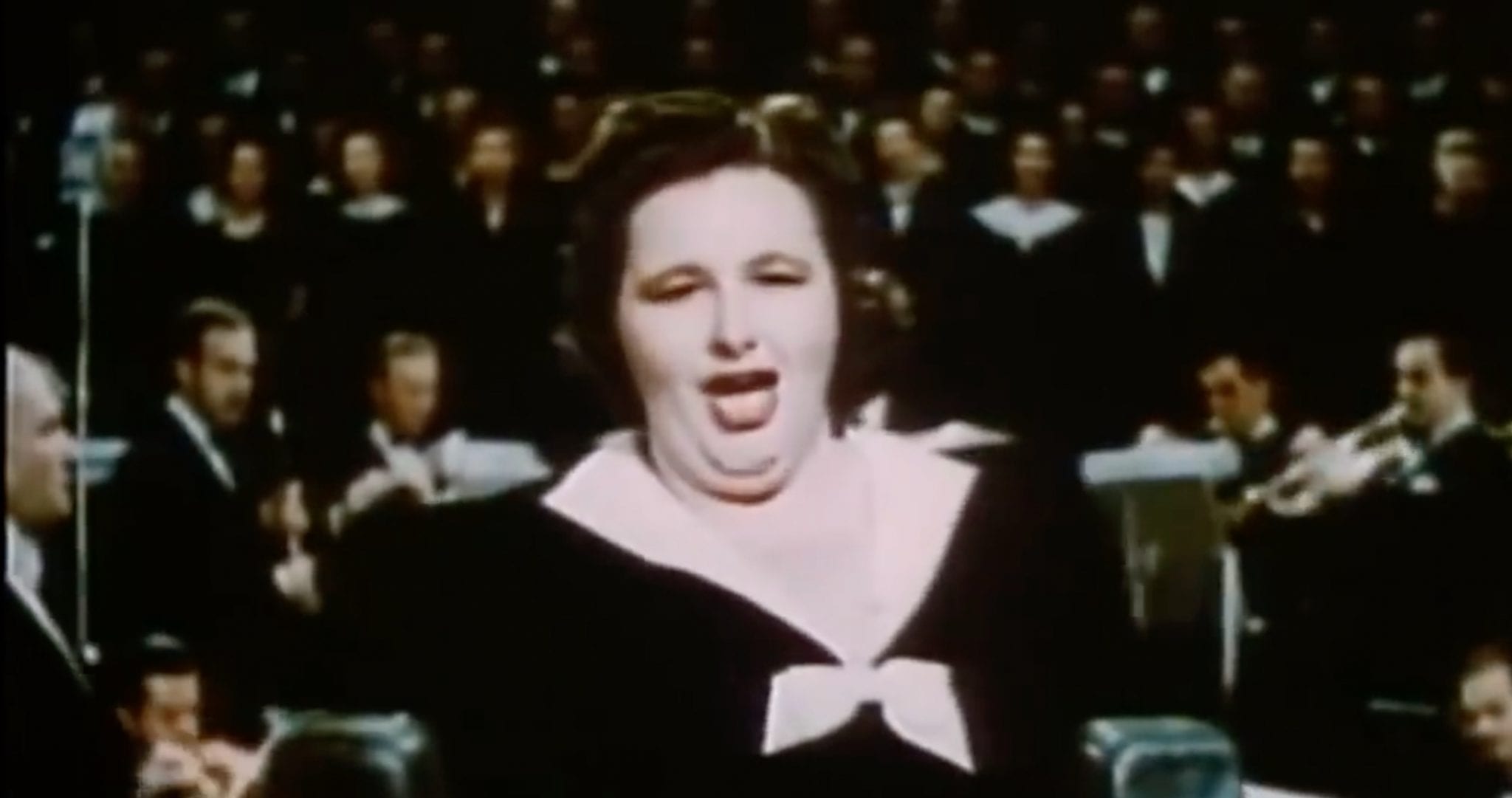 Kate Smith, legendary singer of “God Bless America,” has been blacklisted in New York and Philadelphia, and surely in more liberal bastions to come. The Yankees have banished her from the seventh-inning stretch, killing an inspiring tradition at Yankee Stadium since September 11, 2001. As for Philadelphia, home of the First Amendment, self-proclaimed city of freedom and brotherly love, its progressives have covered their statue of Smith, and the Flyers will no longer boom Kate’s rallying voice during must-win hockey games. Surely it’s only a matter of time before the wrecking ball comes for Kate.

One wonders if New York and Philly liberals can scare up any photos of Kate to airbrush, including those pictures from World War II, where she helped sell $600 million worth of war bonds to defeat the Nazis.

What did the long-deceased Smith do to earn such ignominy? Kate’s offense is a racial one. As the New York Post put it, it has been discovered that Smith in the 1930s performed two songs that “contain racist language and references,” namely “That’s Why Darkies Were Born” and “Pickaninnies’ Heaven.”

Thus, the left’s Torquemadas of tolerance have henceforth proclaimed Kate Smith anathema. Not only must Smith be punished, but her “God Bless America” must be banned. She falls into the New Left’s Orwellian category of non-person. She’s finished.

In no time, the left will demand that Smith’s Presidential Medal of Freedom be revoked, too. President Donald Trump should do so pronto. If he refuses, then he’s an unregenerate racist.

There must be zero-tolerance and no place in public life for singers with racially offensive lyrics in their past, no matter what the era.

Hence, this being so, I’m here to help liberals in this crusade. I’d like to submit for trial the great Irving Berlin, and especially his “White Christmas.”

What? You’re confused? Well, allow me to assist these sages of history and culture.

Kate Smith’s “God Bless America” was written by the wonderful Irving Berlin. Here’s Berlin singing it on the Ed Sullivan Show. Watch it. Beautiful, eh? It brings tears to my eyes. Yours as well?

Well, if so, that’s unacceptable. You need to be enlightened.

You see, Berlin is likewise guilty of musically racial insensitivities.

I happened upon a Berlin heresy by accident. For several years, since my family was given a copy of the DVD as a Christmas present, we’ve watched the classic movie Holiday Inn. This is the original where Bing Crosby first sings Berlin’s magical “White Christmas.” Berlin did the entire score.

Among the musical numbers in the show is a clownishly awful “blackface” routine, where Bing and Marjorie Reynolds dance and sing a piece called “Abraham.” For the record, I don’t like the piece, and neither do my kids. Personally, ever since I was a kid in the 1970s I’ve been baffled by the old blackface routines. I hated them and never understood their appeal. (Of course, I better here say that, and say so emphatically, covering myself in sackcloth and ashes, lest a cabal of progressive priests and priestesses from the Ministry of Truth show up at my door with torches demanding I publicly repent.)

The “Abraham” piece uses the word “darkie” (one of Kate Smith’s sins) along with many other stereotypes that will make a modern snowflake melt. Watch it here.

And yet, what’s interesting about that number is the civics lesson it aimed to teach at the time. The lyrics celebrate Abraham Lincoln for freeing the slaves and liberating African-Americans. It’s a glowing tribute to Lincoln’s signature accomplishment. It’s why Lincoln is remembered as one of our top presidents. Joining in the singing is the African-American woman who plays the role of cook at the Holiday Inn, along with her two little children. That actress is the legendary Louise Beavers, a civil rights fighter in her own right, later inducted into the Black Filmmakers Hall of Fame.

My youngest son, who is black (half-black), looked at that scene attentively the last time we watched it. When we haven’t skipped past the scene, I’ve paused to explain to my kids what Lincoln did, how blacks were oppressed, and why we should honor Lincoln. Indeed, there’s much irony in the scene: Typically, in our current politics, the blackface offender is expected to be a southerner touting the Confederacy and denouncing Lincoln. Here, we have Bing Crosby, northerner, celebrating (with three African-Americans) the North’s victory over the South in freeing black Americans from bondage. Much as I don’t like the whole performance, and that Bing and Marjorie Reynolds look ridiculous, the original civics lesson was undeniably meant to be positive.

As for the actors and actresses, the producer, the director, the composer, the choreographer, they surely thought they were doing a good thing. I doubt that deliberate racism was intended, certainly not by the three African-American performers. But we now know better. They must all be considered racists.

Thus, the same, we must suppose, shall be asserted for the person responsible for the music. And who was that? Well, again, that’s where this gets especially intriguing — in light of the left’s blacklisting of Kate Smith. The music and lyrics were composed by the iconic Irving Berlin, who in 1943 received his one and only Academy Award for his musical work on the film. As one of my Jewish friends often fondly notes to me, the most famous Christmas song ever, “White Christmas,” was written by Berlin, a Jewish man. It was a testimony to Berlin’s true ecumenism and respect for others. Irving Berlin was a great American. God bless him.

Of course, that’s how we used to think in the old America — before the wheels of progress surged forward to enlighten us in 2019. Now I need to seize that DVD and tell the kids it must be banished from our home. We can’t watch it anymore. Maybe we can ceremonially burn it. I do have some Mark Twain books around here that we could use as kindling.

I hope that the good progressives at Netflix, Amazon Prime, Turner Classic Movies, etc., will likewise do their due diligence and remove this film from not only their offerings but their archives. As they do, they will hopefully be vigilant in searching out and purging other classics with blackface renditions. Hollywood’s liberals should also get to work in removing Irving Berlin’s one and only Academy Award for this affront. No excuses! Take it away!

In fact, I bet if we look harder, we might find more offensive songs not only by Berlin but by other legendary composers. Let’s start digging, shall we? Perhaps some ambitious inquisitor at Comrade Bill de Blasio’s or Angry Andrew Cuomo’s Office of Tolerance and Diversity can begin the research. They can post a blacklist outside their offices. Better start immediately. We need to know which persons are acceptable.

(Incidentally, are there any Irving Berlin statues anywhere?)

Whoa, what is that I hear? Protests by liberals? Second thoughts? Too bad. Sorry, liberals, but these are your rules, not mine. Live by them.

You don’t like the world you’ve created? Neither do the rest of us. Your America stinks. And now, accept the standards that you’ve imposed.