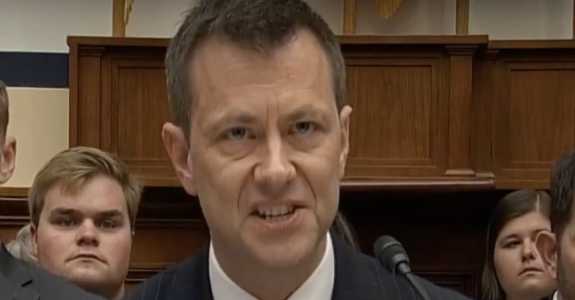 The creepiest witness to ever grace a Congressional hearing, minced in his seat and evaded questions for hours on end Thursday. His name? Peter Strzok (pronounced “Struck” for the Democrats on the committee who kept mispronouncing it). The general impression from his testimony? What a complete weirdo. It is astonishing that someone so strange, supercilious and seemingly evil reached so high a position in law enforcement.

Congressional hearings are always obnoxious but usually it’s the Congressmen and women who are weird, unprofessional, and nonsensical (and there was plenty of that) but they all were upstaged by the paragon of the executive branch, Peter Strzok. Where James Comey was haughty and buffoonish, Strzok managed to maintain a look of utter contempt for hours on end, mixed in with bizarre body language and circumlocution.

For some unfathomable reason, at the end of every Congressman’s statement, Strzok would plead for time to respond, the Republican chairman would give it to him, and then Strzok would babble a self-defending word salad which baited the Congressman into engaging the witness again as he answered a question not asked and attempted to paint himself in an angelic light.

The Democrats imagined crowning Strzok with a Purple Heart (given to soldiers wounded in war, yeah Strzok is a real hero) and accolades. Strangely, every time an answer Strzok gave came close to the truth, Sheila Jackson-Lee would interrupt the witness and try to deflect for him.

The whole production was bizarre. And there were lies. George Neumayr covers them here, at The American Spectator. Here’s one whopper and it was one of many:

One act of obvious perjury during the hearing was Strzok’s claim — which he presented as incontrovertible proof of his apolitical professionalism — that he “never” spoke to reporters about the investigation before election day. Strzok didn’t even bother to coordinate this lie with his defense attorney, who has previously admitted that Strzok talked to reporters about the investigation. Strzok’s attorney wrote an Op-Ed in USA Today saying that “Peter and others” at the FBI “actively ensured that news reports didn’t overplay the seriousness of the investigation.” How did he do that without talking to them?

What struck me, if you’ll forgive the writer, is the breathtaking arrogance. This man investigated criminals. He operated at the top of the FBI influencing multiple investigations. How many bogus investigations did he run? How politicized were his actions with other ostensible criminals?

Further, would the FBI tolerate the sort of entitled behavior and bald faced lying from their witnesses? Paul Manafort sitting in solitary confinement (no collusion, by the way, other badness) and Michael Flynn awaiting sentence for misspeaking would say, no. Strzok was relentless in his investigation of people he disliked and felt dangerous, clearly biased (“F–k Trump!” wasn’t biased, he said) and conveniently looked the other way while investigating the woman he figured would be his future boss, Hillary Clinton.

No other American, under FBI investigation, would be given such deference. And any American could be the subject of an out-of-control FBI agent’s personal animus and would have to put up with it, pay tons in lawyers fees, answer the damn questions, or end up in jail.

Peter Strzok seems to believe he’s above any of these consequences. The leadership at the FBI and DOJ seem to believe the same thing (Deputy A.G. Rosenstein threatened Republicans a couple weeks ago). Picking and choosing which questions to answer, acting as though they hold the Republic in such high regard that they couldn’t possibly reveal secrets that undermine their agency, no American would be given the same latitude before any judge, jury, and prosecutor.

Many questions weren’t asked or answered. Yes, it was established that Peter Strzok was biased. Clearly. He, like many Republicans even, hated candidate Trump and Strzok was in a powerful position to do something about it.  Were any of the allegations in the Steele dossier true? Which ones? Which information provided to the FBI formed a credible basis for an investigation into Donald Trump and his team? Why hasn’t it been presented? How were such drastic actions as intercepting communications from Trump’s campaign justified by the FBI? None of those questions were answered.

Both things can be true: That there were colluding agents amongst the Trump team or even Trump himself, and the FBI is headed by biased and corrupt politicos pretending at objectivity. After the extraordinary (and maybe falsely-based) lengths the FBI and DOJ went to, there better be a damn there, there. The evidence for this is thin.

The picture that continues to be painted is that made-up opposition research paid for by the Clinton campaign and compiled by Nellie Ohr for Fusion GPS was shopped by Fushion GPS, given to operators at the State Department and to other politicians, delivered to the FBI, and ended up as the basis for an investigation. One question that wasn’t answered after Strzok admitted to interacting with Bruce Ohr (4th ranking official at the DOJ), receiving part or more of the information than the Steele dossier from Ohr, was whether the information came from Nellie Ohr, Bruce’s wife who worked for Fusion GPS. That question, according to the lawyers of the FBI, couldn’t be answered by Strzok. Why?

Strzok interacted with the committee like a man who feared nothing and no one. He lied more than once, and smirked while he did it.

Most of all, he was just a strange guy. How did such a squirrelly person end up with so much power? While all the big questions hang out there, the person, Peter Strzok, left the most disturbing aftertaste. Our government is made up of deceitful guys like Strzok and Comey. It doesn’t engender confidence.

Some video of weirdness:

Completely real. I personally recorded it from my tv. I was so shocked when I saw it and played it back. I only cut the first part of the arguing. This is the full recording I captured. I couldn’t believe it. pic.twitter.com/fL3Ji16qP1