Earlier this month, on more than one occasion, someone pretending to be a member of the Heartland Institute’s Board of Directors deceived a Heartland staff member into sending him documents related to Heartland’s upcoming Board of Directors meeting. These documents, along with another note which Heartland spokesman Jim Lakely describes as “a total fake apparently intended to defame and discredit The Heartland Institute” were then posted on a web site called DeSmogBlog.com, a project of Jim Hoggan, a self-styled public relations expert, global warming alarmist and aggressive member of the climate thought police.

The documents are being treated by the hyperventilating climate alarmism industry as a smoking gun when in fact they disclose nothing surprising or particularly secret except for certain donor information.

Everyone who is involved in this debate knows that Heartland works hard to counter the alarmism industry, not because Heartland is shilling for any particular group or industry, but because my former colleagues truly believe that the science is at best unsettled, and that the economic disaster of so-called “solutions” to this dubious problem must be prevented if our standards of living and our economic and political liberty are to be preserved.

The Heartland Institute takes its educational role seriously, and I’m proud to be associated with them in our efforts to stop those anti-capitalists who have found the “climate change” debate a useful tool with which to try to achieve their far-left policy aims.

The Heartland Institute is in contact with law enforcement officials, which may have the perpetrator feeling a little nervous.

One obvious suspect in the Heartland document theft — and this is just my speculation — is Peter Gleick, president of the Pacific Institute for Studies in Development, Environment and Security and a true enemy of the Heartland Institute. Gleick is a committed alarmist rent-seeker who seems quite bitter that he shares Forbes magazine’s pages with Heartland’s James Taylor.

The document which the alarmists have been trying to make the most of is called “Confidential Memo: 2012 Heartland Climate Strategy.” It appears to be of a similar nature to the forged “Rathergate” documents which ended Dan Rather’s long career promoting leftist views disguised as news.

First, the Heartland document is written in a way which makes it appear unlikely to be genuine. As a commenter on a Forbes.com article about this mini-scandal notes, “It uses the term ‘anti-climate’ to refer to Heartland’s own position — a derogatory term which climate skeptic outfits never use to describe their positions (and…) it is written in the first person, yet there’s no indication of who wrote it. (Have you ever seen a memo like that?)”

Downloading the document, I find that the document properties list no author and say it was created on Monday by a scanner. 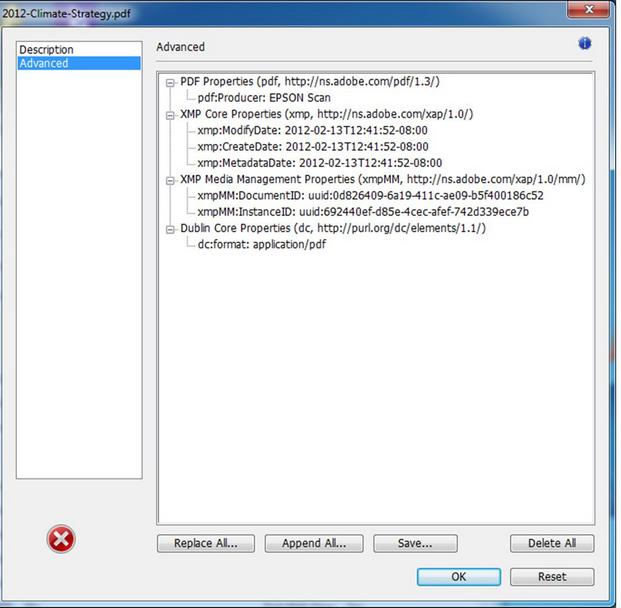 A check of the same sort of data for other documents, such as the Board directory and a notice for the January 7th Board meeting, show authors (including Heartland President Joe Bast) and show that the documents were not created (as PDF files) by a scanner but by software instead.

If the document thief could convert any documents received by e-mail from Heartland into PDF files with software, he could convert all of them. Or, if Heartland distributes its documents as PDF files, then the thief would have received a PDF dated prior to the last theft of documents. In either case, this document seems remarkably, suspiciously unlike the various stolen documents.

Furthermore, as others have noted on the web, the data shows that the file was created on a computer set to the Pacific time zone (signified by the -08:00 in the timestamps), where Gleick is based but where Heartland does not have an office. The stolen documents show their creation in the Central time zone.

In other words, all evidence so far supports Heartland’s emphatic assertion that the document is a forgery.

Interestingly, Gleick, who would normally be preening and prancing in glee at this sort of attention to the Heartland Institute has so far been utterly silent at his Forbes blog and on his Twitter feed.

One has to wonder if Peter Gleick or an alarmist fellow traveler he knows is concerned about an FBI agent knocking on the door sometime soon. Perhaps people should keep an eye on the dumpsters around Gleick’s house for discarded computers or an Epson scanner.