Free Speech Under Assault 1984,Gender Identity,josh hawley,Transgenderism,woke,Wokeness,Women The Words of the Woke - The American Spectator | USA News and Politics
Menu
Free Speech Under Assault
The Words of the Woke
The woke impulse to control language stems from narcissism and insincerity.
by Shmuel Klatzkin
A mother and her child march in the National Trans Visibility March in Sacramento, Calif, on Oct. 9, 2021. (Shutterstock/Chris Allan) 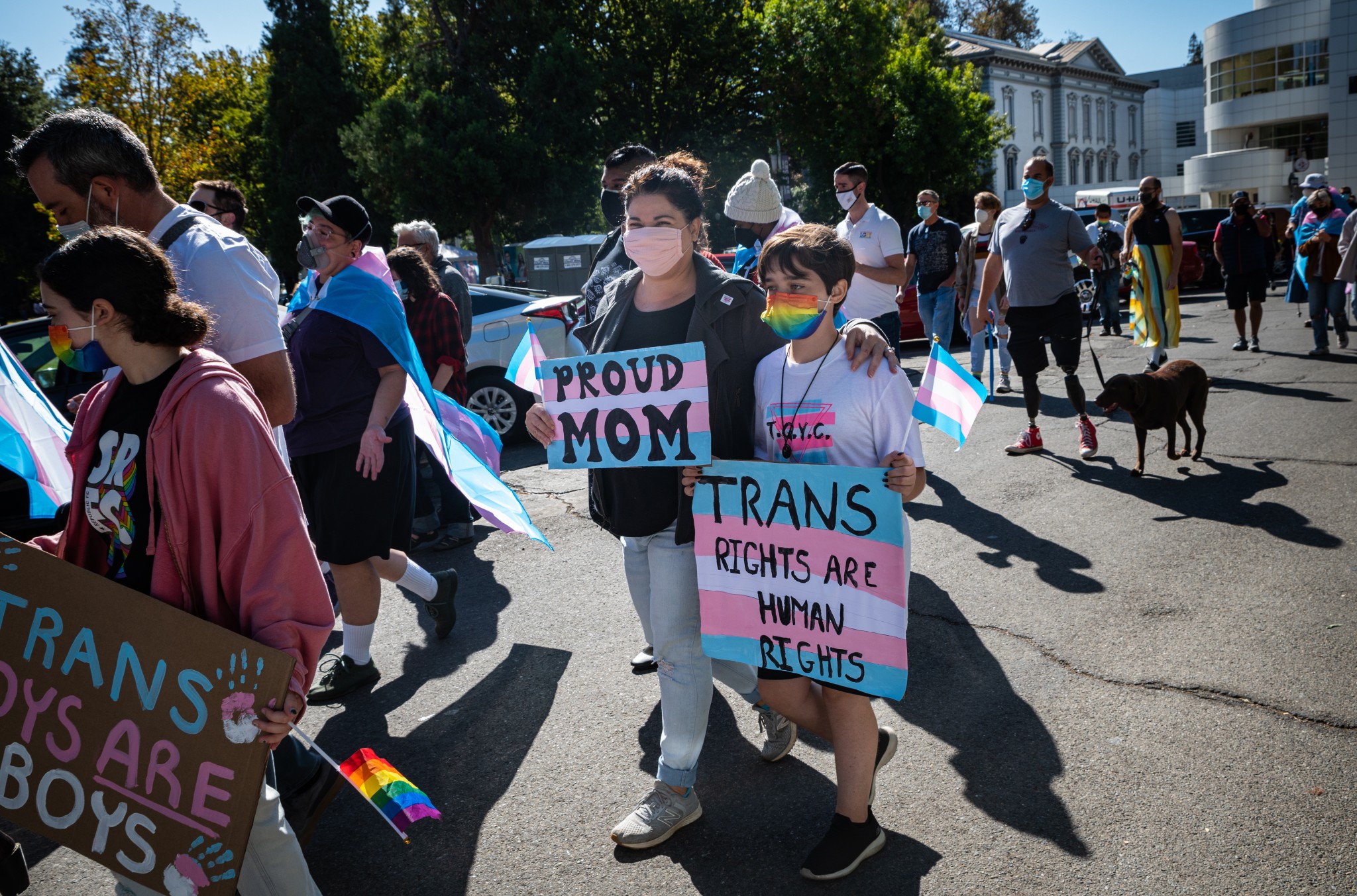 Language is linked with thought. We talk about the things we think about.

Thought is private. Others can only guess what we are thinking until we reveal our thoughts by speaking them or writing them down.

Oppressors control speech in order to control thought. They believe that their own freedom is intolerably limited by the freedom of others. Sometimes, with pint-sized oppression, the oppressor monopolizes a conversation, not letting in a word edgewise. Other times, when the narcissism and the malevolence are greater, the oppressor becomes violent, like an abusive spouse who shuts down any expression of difference. Sometimes the narcissism and malevolence are on such a grand scale that the population of an entire empire is terrorized, lest someone interpret one word or gesture to be insulting to the leader, resulting in prison camp, torture, or death.

Our greatest thinkers have known that intolerance undermines human freedom and civilization. The influential political philosopher Leo Strauss wrote about how writers try to encode their messages, in his stunning book, Persecution and the Art of Writing. A few decades earlier, James Joyce wrote of how his young fictional avatar, Stephen Dedalus, rebelled against the dictates of a sternly dictatorial Church. Dedalus’ priestly academic inquisitor asked him how he would evade the Church’s censorship and censure. He replied: “Silence, cunning, and exile.”

The thinkers whom Strauss wrote about used their cunning to seem silent on issues that their oppressors did not want discussed, while finding ways to encode their thought for those who wanted to know and grapple with the difficult truths their thought had led them to. Joyce left Dublin and eventually found a haven in Trieste where he wrote Ulysses and Finnegan’s Wake, some of the deepest explorations of language and human consciousness that have ever been set in print.

Almost anyone who writes on the topic of free speech today mentions George Orwell, and for the best of reasons. Orwell disciplined himself to write in concise, clear, plain English to make his meaning unescapable. There is no fluff in his style and his passion against totalitarianism has the authenticity of one who at one time believed in the utopian message of the dictator but finally saw through it. 1984 shows the goal of those who would govern your speech: to govern your mind. Big Brother was not content with your forced assent either. Like the final humiliation of the rapist’s victim, 1984 doesn’t end until Winston Smith loves Big Brother.

This need to be loved by everyone is at the core of narcissism. The baby is a pure narcissist, for it cannot survive without the love of others. Ask the parents of any infant how capable a newborn is of reciprocating their sacrifices and letting them sleep. An adult narcissist requires the same love and, like the baby, is not going to strive to earn that love. If the adult then allows malevolence, he will invade the freedom of others in an attempt to compel love. Orwell’s bleak picture sees them succeeding even as they destroy the humanity and then erase the life of the one compelled.

A battle in the war for free speech was waged before a Senate committee this last week. Sen. Josh Hawley questioned a law professor about a phrase that she had pointedly repeated. What was the point, he wondered, of insisting again and again on the phrase “a person with a capacity for pregnancy” instead of using the simple, straightforward Anglo-Saxon word “women”?

I admit, that repeated phrase grated on me as well. My ninth-grade English teacher had us cut our teeth on Orwell’s essays on English writing. In one of them, “Politics and the English Language,” Orwell insisted on the economy of words, on never using two words when one would do (would that I might fully internalize this lesson!). I am in sympathy with Hawley’s question.

The gist of the law professor’s answer was that she was using “women” in a different way than it has been used traditionally or by most people today. She required the word to mean those who have chosen to call themself a woman despite having an x and a y chromosome, for example.

The problem was not so much the bad style of being forced to dig out from under a pile of verbiage but that the law professor indicated that if one did not adopt this way of talking, they were outlaws — people responsible for violence against specific groups of people just for being who they are.

Here are the law professor’s words: “I want to recognize that your line of questioning is transphobic and it opens up trans people to violence by not recognizing…because denying that trans people exist and pretending not to know that they exist.”

At that point, Hawley interrupted her, asking, “I’m denying that trans people exist by asking you if you’re talking about women having pregnancies?

Professor: “So you are denying that trans people exist, thank you!”

If one accepts the professor’s redefinition of the word ‘women’, her argument almost makes sense. With another word, it could have been compelling, even to those who disagree with her: If you do insist that your way of conceptualizing identity is the only way, that is intolerant, and intolerance breeds violence.

But that would have required using words to communicate, not to manipulate. Communication requires good faith and sincerity, a real openness to the other, and an openness to one’s own need to grow and deepen.

But imposing radical redefinition on words that belong to everyone is anything but a sincere attempt to communicate. And the professor made no attempt to argue for her redefinition, without which her triumphalist conclusion is a non sequitur, utterly unpersuasive and laughably pretentious. The proper accompanying gesture would be Mussolini jutting his chin out as the crowd roared.

That is at the bottom of this all. There is little sincerity in the words of the woke. They do not believe they have to bother explaining or proving anything. They have no duty to you. And since they have the incontestable and final interpretation of the truth, you must not only not question them, you must love them in the end.

That we are prepared to do, just as we are prepared to love the divine spark that is hidden in even the worst of our fellow humans. But we will continue to question and challenge every word and every action that falls short of the duty of responsibility we all share. In sincerity, we seek to be enriched with everything that the divine genius has intended in the majestic diversity of human life, and of all life. And for our sake and the sake of all humanity, we will resist the corruption of language and of thought that inevitably brings ruin.