Right now, most China observers focus their attention on the upcoming 20th National Congress of the Chinese Communist Party, which will be held in mid-October. Their focus is on whether Xi Jinping, who is finishing up full two terms (10 years) like his predecessors, will break the norm and continue to be the party boss.

Compared to his predecessors, Xi is certainly much more powerful, aggressive, and controversial. Previous party bosses all subscribed to the advice of the late Deng Xiaoping, the most prominent CCP leader after Mao’s death in 1976: Do not try to be the world’s leader and do not challenge the U.S. Deng summarized his strategy using a Chinese idiom, “Hide one’s claws and bide one’s time.”

Indeed, the past CCP leaders, Jiang Zemin and Hu Jintao, all expressed affinity for private businesses, welcomed foreign investment, and avoided direct confrontations with the U.S.

Xi has changed all that since he assumed power in 2012.

Under his reign, the CCP has substantially increased its restrictions on personal freedoms, which were already extremely limited. Xi has also interfered with economic activities at an unprecedented scope. For example, he stopped the IPO of the financial giant Ant Group and killed the after-school education sector. Internationally, the CCP has waged more and bigger confrontations with democratic nations, constructed artificial islands for military use on international waters, and exerted greater influence on global rule-setting. It has spent billions of dollars to bribe elites in democracies.

In sum, the CCP’s strategy and actions under Xi are more repressive domestically and aggressive internationally. All of these have caused great anxiety among more liberal-leaning Chinese and observers and policymakers in democratic countries.

The threat to our democracy is not an idiosyncratic CCP leader such as Xi; the threat is the largest political organization in the world.

Liberal-leaning Chinese believe Xi has abandoned Deng’s strategy of “Hide one’s claws and bide one’s time” by directly challenging democratic countries, especially the U.S. Their wish for CCP’s 20th National Congress is to replace Xi with a moderate leader. Their goal is to contain Xi to save the CCP.

Policymakers in democratic countries, meanwhile, hope for a leader who will seek friendlier relations with the U.S. and be less aggressive.

This fixation on Xi and the hope for a more tolerant CCP leader is misguided and misleading.

The reason that we, people in democracies, are concerned about China is that it projects undue influence on the world order and our very home. According to the CCP’s ideology, it must achieve world dominance. There is no difference between Xi and other moderate party leaders as far as the ultimate goal is concerned. The difference exists in the speed and method for achieving such dominance.

Helped by the democracies through trade and investment, China’s economy has grown rapidly to become the world’s largest based on purchasing power parity. So, it is more assertive and aggressive. If someone else is the head of CCP, he would have to challenge the U.S. and world order, except maybe at a different pace and degree than Xi would.

Naturally, most democracy-loving people tend to want a more moderate CCP leader better because he will be more amiable to the U.S. However, such a leader could actually be more dangerous than Xi. He could conceal the CCP’s intentions better and win more support from academics and policymakers in democracies who are either bought off by the CCP or have vested interests in China.

The threat to our democracy is not an idiosyncratic CCP leader such as Xi; the threat is the largest political organization in the world: the Chinese Communist Party. It is well-organized, highly disciplined, and controls the largest financial and human resources in the world. Like all dictatorial political systems, the CCP does not have a set of transparent and fair rules for leadership transition. But that is a headache for the CCP, not the most important concern for democratic countries.

For democratic countries, an urgent and important task is to understand the expansive goal of the CCP and how it plans to achieve that goal. This understanding will help us to formulate effective strategies to counter the CCP’s expansion. 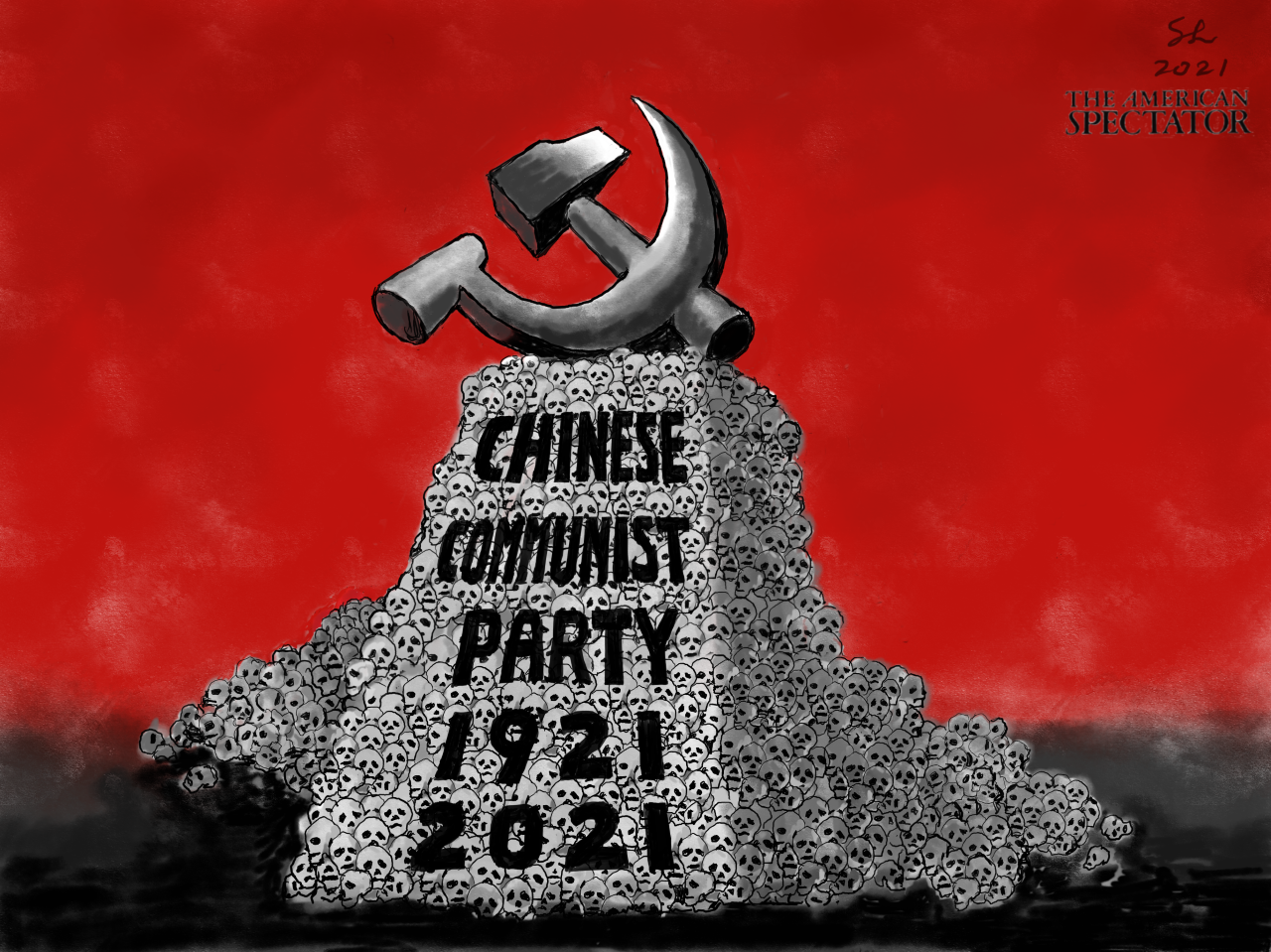 “The CCP’s Century of Terror,” editorial cartoon by Shaomin Li for The American Spectator.

The Chinese Academy of Social Sciences, the top think tank for the CCP, recently identified five key features of the Chinese economy: efficient markets, active management by the government, a well-organized population, the ability to mobilize all resources of the country, and development according to state planning. These five features form what I call “China, Inc.,” meaning that the CCP runs China like a giant corporation.

All people in China must follow the order of and work for the CCP; all firms — whether they are privately owned or foreign-invested — are units or joint ventures of China, Inc., with the CCP’s leader being the CEO. Government agencies are functional departments of this giant corporation. China, Inc. has the huge resource of a country and the agility of a firm, making it extremely competitive in the world markets. To protect international law and order, their domestic markets, and their way of life, the democracies must be able to counter China, Inc. effectively. (READ MORE: A Deal With the Dragon)

An increasing number of countries have begun to express their concerns about or even criticize China, Inc. Facing the growing criticism and the possibility of delinking, the CCP may adjust its strategy. So, we must pay close attention to the upcoming party congress. The CCP may retreat from China, Inc., or further strengthen China, Inc. This, I think, is more important than the fate of Xi.

Instead of “curbing Xi to save the CCP,” we need to set our goal as curbing the CCP and its China, Inc. to save our economy and democracy.

Shaomin Li is Professor of International Business at Old Dominion University and author of The Rise of China, Inc.: How the Chinese Communist Party Transformed China into a Giant Corporation.