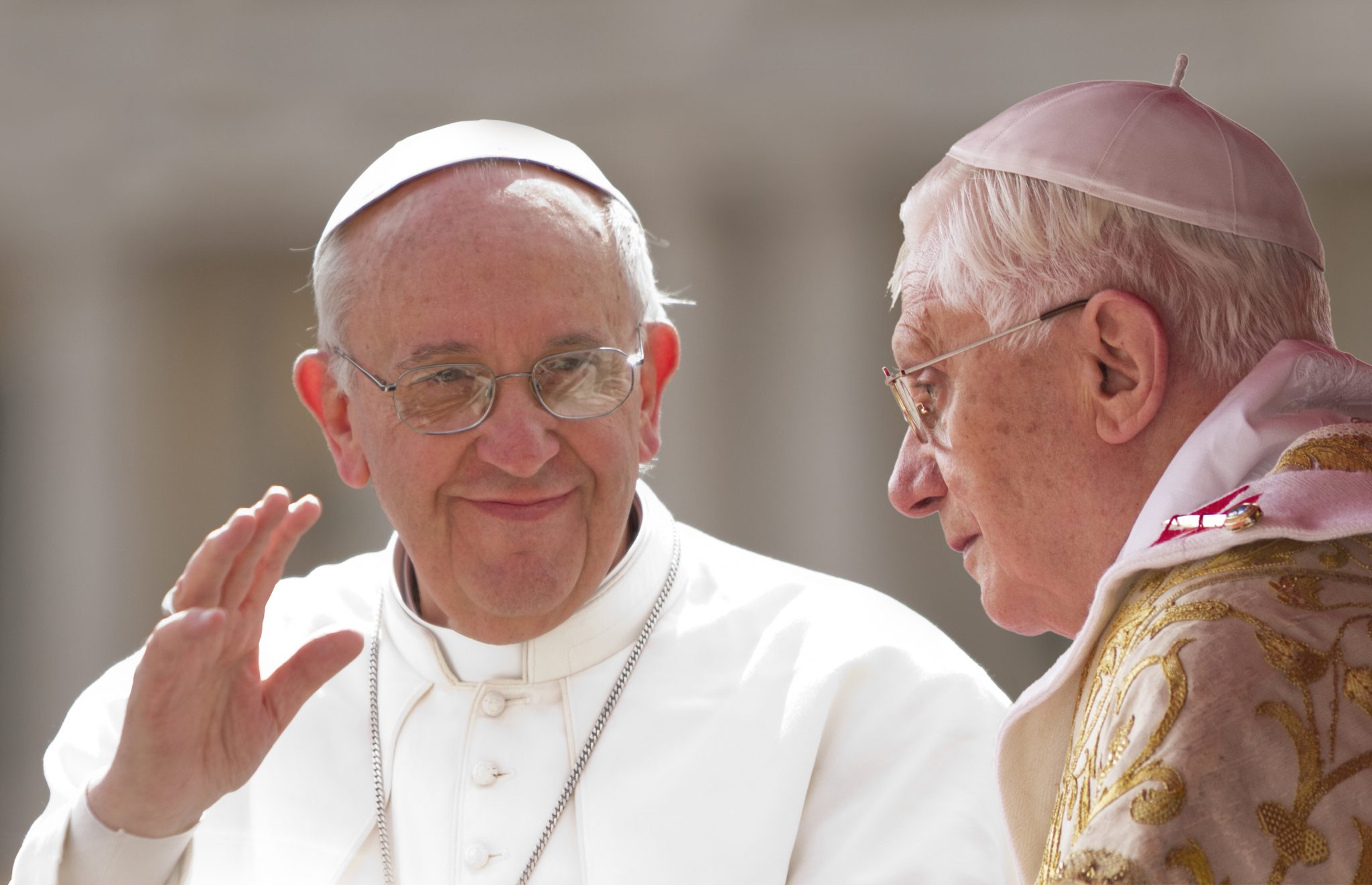 When Pope Francis grants an interview, he makes news by subverting Church teaching. When Pope Benedict XVI gives one, he makes news by upholding it. Therein lies the two popes problem, about which the media can’t stop complaining. This last week it ran stories pitting the two against each other after a new book about Pope Benedict XVI appeared, in which the pope emeritus defends the Church’s moral teachings and reviews the crisis in the West.

The supposed conflict, though, is mythical, as Pope Benedict XVI is far too nonconfrontational and passive to wage any sort of battle against his successor. Benedict has gone out of his way to soften any differences between the two, even though Pope Francis represents the very relativistic and politicized Catholicism he feared.

If anything, Benedict has cooperated in the Vatican’s propaganda about the continuity of the two popes. And yet liberals outside and inside the Church still want him to shut up.

Would the Jesuits write such an editorial if Benedict were making heterodox comments in line with the “reforms and pastoral emphases of Pope Francis”?

During Benedict’s pontificate, the Jesuits in particular argued for the freedom to dissent from papal teaching. But now that a fellow liberal Jesuit is pope, they argue that Benedict should keep his mouth shut, so that Francis’s liberal program can proceed unimpeded.

Their editorial on this subject in their magazine America is pretty rich, given that if the two roles were reversed they would be making the opposite argument. The passive-aggressive editorial is titled, “Discerning When and How a Pope Emeritus Should Speak.” The editorial begins politely enough, suggesting that Benedict receives unfair treatment from the media:

Loud headlines in both the religious and secular press earlier this week repeated a trope that has become familiar over the past few years: Pope Emeritus Benedict XVI was speaking out in dramatic ways. Benedict was quoted as saying that the church is threatened by “a worldwide dictatorship of seemingly humanist ideologies,” using same-sex marriage, abortion and in-vitro fertilization as examples and linking them to the “spiritual power of the Antichrist.” His comments were far more extensive and nuanced, of course, but social media and news coverage often make it sound as if he has just held a press conference to denounce something — or someone.

But then the editorial gets to what is really on the Jesuits’ minds: Why is Benedict making off-key orthodox comments publicly? It states,

It is reasonable to ask, then, whether, in this new role as pope emeritus, Benedict’s public commentary is contributing to the life and unity of the church, especially when his comments touch on matters (including sexual abuse and priestly celibacy) that are challenging, hot-button issues for his successor and for Catholics in every parish.

We do not attribute unworthy motives to the pope emeritus. Benedict also may not be aware of the way his comments can be described or misconstrued by individuals whose motives are not so trustworthy as his. (America would normally link to specific third-party examples, but we have no interest in directing our readers to what is essentially misinformation.) Benedict’s words are regularly used as a cudgel by those who make no secret of their desire to hinder the reforms and pastoral emphases of Pope Francis. For example, Pope Francis said in 2013 that an overemphasis on church teachings regarding human sexuality runs the risk of enfeebling the church’s evangelical efforts. In this respect, breathless reporting of Benedict’s comments on social issues like gay marriage, abortion and celibacy depicts him as issuing a correction of his successor and taking sides in favor of a more hardline Catholicism.

Would the Jesuits write such an editorial if Benedict were making heterodox comments in line with the “reforms and pastoral emphases of Pope Francis”? No, that would presumably contribute to the “life and unity of the Church,” in their view.

So the problem for the Jesuits is the same as the one for the left-wing media: Benedict’s orthodoxy. He should shut up, according to them, not because he is a pope emeritus but because he is singing out of tune with the times outside and inside the Church. It is the same old story: liberals demanding free speech for themselves while denying it to their opponents.