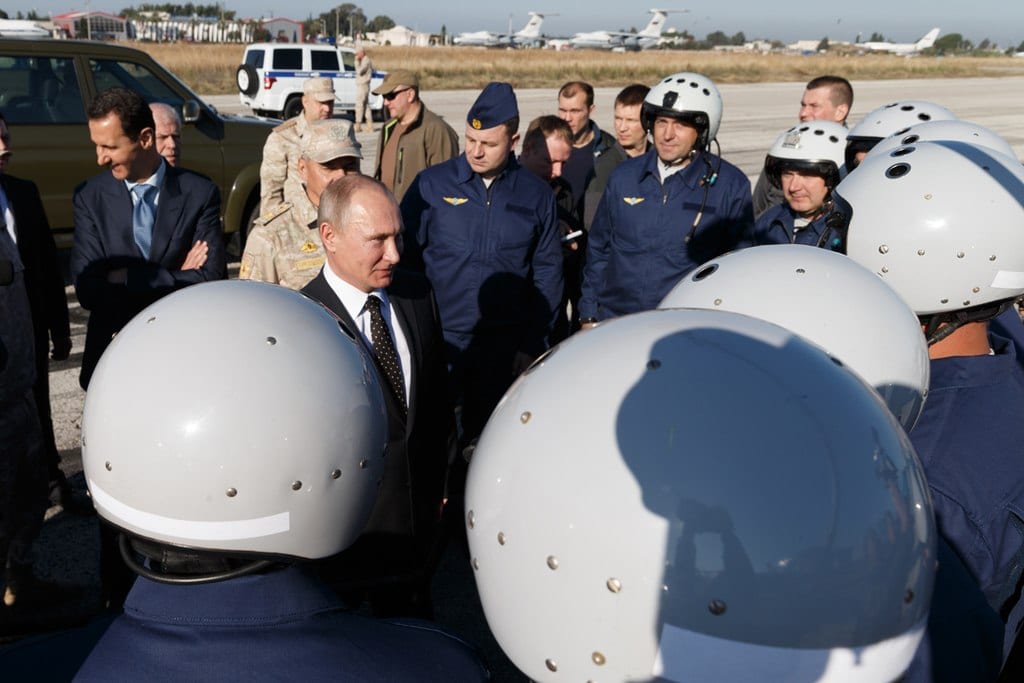 Tomorrow is the 17th anniversary of the 9/11 terrorist attacks on America. We have been in Afghanistan since a month after the 9/11 attacks that emanated from there with the help of its Taliban government. Our forces, and those of our allies, soon drove the Taliban out of Kabul, but the Taliban have never been defeated.

We invaded Iraq in 2003, and some number of our troops are still there to fight the ISIS terrorists. Radical Shiite cleric Moqtada al-Sadr, whose troops fought U.S. troops for a decade, is — like ISIS — undefeated in Iraq.

On Friday, Defense Secretary James Mattis was in Afghanistan saying that while there is still fighting to be done, there is the possibility of reconciliation between the Taliban and the Kabul government. On the basis of previous secret talks with the Iranians he, and other U.S. officials, apparently believe that there is a framework for a peace agreement that would allow the Kabul government to control the cities and yield control to the Taliban in more remote areas.

Mattis’s approach is evidently based on the theory that the Taliban may finally be tired of war. But he knows better, having learned the falsity of those conclusions from the Vietnam War. We’ll come back to that lesson in a moment.

At the same time as Mattis was raising hopes of a peace deal in Afghanistan, the president was announcing a new strategy in Syria that is enmeshing us there in a third simultaneous quagmire of war.

On Thursday, President Trump reportedly agreed to a new Syria strategy that aims to push Iran and its proxy force — the Hizballah terrorist network — out of Syria. The new strategy adds that goal to the old objective of destroying the ISIS terrorists in Syria.

Mr. Jeffrey, according to that report, said we’re not in a hurry and want to ensure both Iranian departure and the “enduring defeat of ISIS.”

Jeffrey also said that our policy is not that “Assad must go” but, according to Jeffrey, “Assad has no future but it’s not our job to get rid of him.” And our goals now include the establishment of a “stable, nonthreatening government acceptable to all Syrians and the international community,” according to that report.

Whose job is it to get rid of Assad? How is it possible to form a new government in Syria that’s going to behave like a member of Mr. Rogers’s neighborhood?

From Trump’s new strategy, as explained by Jeffrey, we must conclude that we haven’t learned a damned thing since 9-11-2001.

Iran won’t withdraw its forces from Syria just because we want it to. Iran, like its Russian ally, has established permanent bases in Syria. Iran’s extend to the Israeli border. If Iran is going to withdraw from Syria, it will have to be driven out by military force.

The same goes for Russia. Trump doesn’t want a war with either Iran or Russia. But how else does he think either is going to decide to withdraw from Syria?

There are fundamental distinctions between the Afghanistan war and the war in Syria. (They are the same distinctions that separate the Syria conflict from the Iraq war, in which we are also still engaged.)

Except for their ideology, the Taliban are not monolithic. Segments of the Taliban are dependent on Pakistan and have been so since the 1980s. Others are funded and armed by Russia, Iran, and even China.

The Taliban’s religious ideology is why they will fight regardless of whatever peace agreement they make. That, and their nationalism, compel them to use whatever advantage gained in diplomacy to further their ultimate purpose, which is to destroy the Kabul government and resume their control of Afghanistan.

Any peace terms we reach with the Taliban will dissolve as quickly as those we negotiated with the North Vietnamese in 1973. The Taliban will return Afghanistan to a safe harbor for Islamic terrorists who will mount attacks against the West.

The difference between Afghanistan and Syria is twofold. First, the Taliban’s religious ideology is the center of gravity there and it will take decades, perhaps generations, to defeat it and win the war. So far, we haven’t even tried. In Syria, it is Russia’s and Iran’s desires to dominate the Middle East that motivates the two nations.

Second, the Syrian war is being fought directly by Russia and Iran rather than the Taliban, which is a native force. Iran’s proxy force, the Hizballah terrorist network, also has a major presence in Syria. If we were to try to rid Syria of Iranian forces — which the president now says he wants to do — we will have to fight a war against both Russia and Iran. Neither is going to withdraw from Syria willingly, as the summit between Russian, Iranian, and Turkish heads of state last weekend demonstrated.

What may be the last big fight in the Syrian war was the focal point of a summit meeting of Russia’s Vladimir Putin, Iran’s Hassan Rouhani, and Turkey’s Recep Erdogan. Their common desire is to defeat Syrian rebels in their last Syrian refuge in the northwestern Syrian city Idlib and the surrounding Idlib province.

Erdogan, whose forces are there in an attempt to crush Kurdish forces, proposed a cease-fire which Putin rejected quickly. Turkey is worried that the ongoing efforts of its allies — Russia and Iran — will cause another flood of refugees fleeing Syria into Turkey.

Syria’s Assad regime is the obvious puppet of Russia and Iran. Assad and his bosses are about to launch what they hope will be the final assault on rebel — i.e., American-allied — forces.

Russia wants us to know it has made Syria a strategic objective. A minor Russian Duma member, Vladimir Gutenev, suggested late last month that Russian tactical nuclear weapons should be deployed in Syria. He would not have made that suggestion without a nod of approval from Putin. Gutenev’s statement was a direct threat to Israel which Putin isn’t — at this point — likely to fulfill. Russia, in the Middle East, has become a power equal to the United States, and wants to be superior.

Russia is attacking the area around Idlib as I write this. Russian aircraft have been conducting intensive bombing of rebel forces, very close to the 2,000 U.S. Marines and special forces operating there in opposition to ISIS and in defense of the Kurds. Last week, a live-fire exercise by about 100 Marines was meant as a gesture toward Russia and Iran of our determination to finish destroying ISIS and protect our Kurdish allies. But the force was too small to accomplish that.

Both UN Ambassador Nikki Haley and Jim Jeffrey have warned that the Assad government is apparently preparing another chemical weapons attack on rebel forces in and near Idlib. Haley has warned against another such attack, saying that there would be a U.S. response.

After an April chemical weapons attack on civilians by Syrian forces, Trump ordered a cruise missile strike against the Syrian airbase from which the attack came. Our strike obliterated about a third of the Syrian air force but didn’t end its ability to carry out further chemical weapons attacks. Russia has moved more air and naval assets into Syria, probably replacing the aircraft we destroyed and — given its past conduct elsewhere — putting Russian pilots in aircraft with Syrian markings.

Trump is running a bluff in Syria and the Russians and Iranians are calling him on it. If he has a strategy there, it’s failing as is his strategy in Afghanistan.

Both Afghanistan and Syria are now strategic national security problems for us.

We know what the Taliban will do and, for the most part, how they will do it. Once peace is declared, they will use their Russian-supplied and funded fighters to retake control of Afghanistan. Hamza bin Laden, son of Osama, has been raised to become the new head of a revitalized al-Qaida. He, and leaders of other terrorist networks, will be supported in Afghanistan, Pakistan, and probably Russia. Without a constant American military effort, they will thrive.

The only answer in Afghanistan is a choice of the least bad option. As I’ve written before, we can withdraw most of our ground forces, leaving behind enough intelligence forces, air power, and special forces to suppress the terrorist threat that will otherwise arise and to attempt to interdict the help they will receive from Russia and Pakistan.

We had no strategic interest in Syria when its conflict was a civil war. But that was before the Russians and Iranians arrived in force and established themselves in control of Syria. Now it is too late to drive them out without a major war with both nations.

As with Afghanistan, the only answers in Syria are the least bad options.

The president is strangling the Iranian economy with economic sanctions. A second wave of sanctions will be put in place in November, blocking most Iranian oil exports. The sanctions are a good weapon, but not enough. We need to engineer a regime change in Iran.

The president can make a “presidential determination” authorizing covert support for Iranian revolutionaries. He should make that “determination,” and both fund and arm the Iranian resistance. It may take years to accomplish, but it can be done.

The president has to face the fact that Putin is doing everything he can manage to support Iran in Syria and the Taliban in Afghanistan. Trump needs to accept reality. Before Trump can be effective in Syria, Afghanistan, and many other conflicts, he has to recover from his bizarre one-sided friendship with Putin and treat Putin as the enemy he has always been.

That means more economic sanctions against Russia. It means using the presidential bully pulpit to condemn Putin’s actions regularly and in specific terms.

There’s no certainty that the actions suggested here will accomplish the strategic outcomes in Afghanistan and Syria that are essential to our national security. But these actions have a much greater chance of success than what we’re doing now. Whatever that is.