The names of the 10 Republican senators who jumped in bed with Chuck Schumer and Chris Murphy to forge a stupid deal on guns Sunday won’t surprise you.

It’s the usual roster of the Washington Generals, the political version. You know, the basketball team which finds a way to lose to the Harlem Globetrotters every time?

Those guys. Their names are John Cornyn of Texas, Thom Tillis and Richard Burr of North Carolina, Roy Blunt of Missouri, Bill Cassidy of Louisiana, Susan Collins of Maine, Lindsey Graham of South Carolina, Rob Portman of Ohio, Mitt Romney of Utah and Pat Toomey of Pennsylvania. Burr, Blunt, Portman and Toomey are all leaving the Senate and will likely be replaced with far better conservatives, people with blood and sand. Romney comes up for reelection in 2024 and Cassidy comes up in 2026 and they will almost certainly be shown the electoral gate by Republican voters. Cornyn and Tillis seem destined to underwhelm their voters until they die in political office. As will Graham. And Collins? Well, she’s essentially a welfare Republican; we’re to believe that Maine can’t do better than a GOP senator who’d rather be a Democrat as often as not.

It’s not that the deal is the worst thing this crew could have agreed to. They could have done more damage to the Second Amendment — and quite possibly the First — and we should by no means discount the possibility that they will before it’s all said and done.

But — and we’ll talk about this in a minute — what is the point of making any deals at all on guns?

The Senate compromise is a pale imitation of the radical gun control bills passed in the House that included safe storage mandates, federal “red flag” confiscation, and a ban on semi-automatic gun sales to adults under 21 years old. From the AP . . .

The proposal falls far short of tougher steps long sought by President Joe Biden and many Democrats. Even so, if the accord leads to the enactment of legislation, it would signal a turnabout from years of gun massacres that have yielded little but stalemate in Congress.

Leaders hope to push any agreement into law quickly — they hope this month — before the political momentum fades that has been stirred by the recent mass shootings in Buffalo, New York, and Uvalde, Texas. 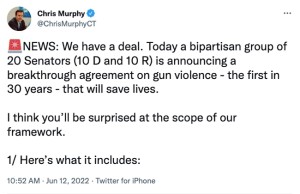 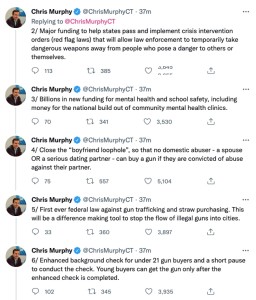 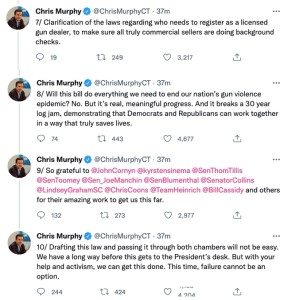 There are two major policy problems with this, plus a structural one.

The structural one is that nothing in here should be the federal government’s responsibility. The feds will now be bribing states to pass the most restrictive red flag laws imaginable, something which is an abuse of federalism which has never worked properly in the past, and all of these other items — the background checks, further restrictions on gun dealers, mental health stuff and so on — is all the proper province of state governments. Republicans working with Democrats to let the federal government restrain trade in legal merchandise, even if it’s something icky like a rifle, is a monumentally bad precedent.

First, now we’re going to restrict the Second Amendment rights of supposed adults 18-21 years old. We sure won’t restrict their right to vote, though — when it comes to understanding how the country should be run an 18-year-old is the most grown-up person on earth but in every other respect we can treat them like kids. Can’t drink, can’t smoke, can’t buy a gun without now jumping through extra hoops (hoops which the courts have already been quite unfriendly toward), but when it comes to serving as drones for the political elite when going into that voting booth and doing what the teachers and college professors say, or going off to war, by God they can do as they’re told like everyone else.

It’s so nakedly cynical, it’s not even funny.

You run into the same problem with this that you always do. You’ll make the law-abiding 19-year-olds suffer when the crooked kids won’t be dissuaded from having a gun in the least little bit. The kids killing each other by the dozen in Chicago aren’t even 18, for crying out loud.

And the second problem is that we’ll now have the federal government, run by the most anti-American, totalitarian, thuggish people this country has ever known, take over the management of our mental health system.

Not that we even have much of one anymore, mind you. The truly insane have been deinstitutionalized for decades and our culture has suffered badly because of that fact, but who wanted that in the first place? The left. They created this monster, and now we’re going to write gun laws the criminally insane won’t abide by and set up a camel’s-nose-under-the-tent for the feds to politicize mental health diagnoses like they’ve been spoiling to do since before Obamacare.

Everything the Nazis, Soviets, and Cultural Revolution Maoists did in the last century is what today’s Democrat Party pleasures itself thinking about doing to ordinary Americans. And you want to give the federal government they’ve captured more power to disrupt your life?

Again, on its face there are things in this deal which sound reasonable. State governments should try them, though in a lot of cases they already have (and they haven’t worked all that well, by the way). But getting in bed with the Democrat Party on anything as it flails away in a vain attempt to ward off the electoral slaughter the American people seem more and more intent on visiting upon them is … well, it’s a Washington Generals move.

If you have occasion to converse with the Cassidys, Romneys, and Cornyns who broke bread with Schumer to present this arrangement, which will as said above surely get worse when it’s reduced to legislative language, you can stump them with this question:

What did you get for doing this deal?

Did the Democrats agree to fund the hardening of schools as targets by providing more security?

Are we going to arm qualified teachers to respond to school shooters? Will we get an agreement from the cultural institutions the Left runs to stop glorifying antisocial behavior and perhaps create fewer monsters like Payton Gendron and Salvador Ramos?

Will we re-fund the police and end the “reforms” which put so many violent criminals back on the streets after they get caught?

This is the Democrats going trick-or-treating in an effort to politically monetize a rash of mass shootings fomented by the steep decline in American culture they’re almost completely responsible for, and the Republicans dutifully reaching into their baskets and dumping Milky Ways and Reese’s cups into their bags.

And it will continue forever until the Cornyns and Grahams and Portmans are gone from positions of leadership and replaced with people who recognize the prime importance of not screwing over the people who voted for them.

If you’re going to do this deal, get a concession on something your people want.

I say this all the time, but Stupid Party Republicans like the abovementioned 10 senators get waylaid by the Left who demand things. Let’s say $100. Rather than ask what they’re offering for that $100, the Stupid Party begins to panic and contemplate how much of the $100 they’ll give up to make the Left go away.

They never get it.

And that’s why this current political age can’t end fast enough. We have to flush the Stupid Party Republicans and replace them with people who are interested in beating Democrats rather than giving away our rights to them little by little. And while this gun deal might not sound like a colossal surrender, it for damn sure isn’t a victory.

But there is no victory when it comes to those 10 senators. There’s only loss. Our loss. Until they finally lose and go home.