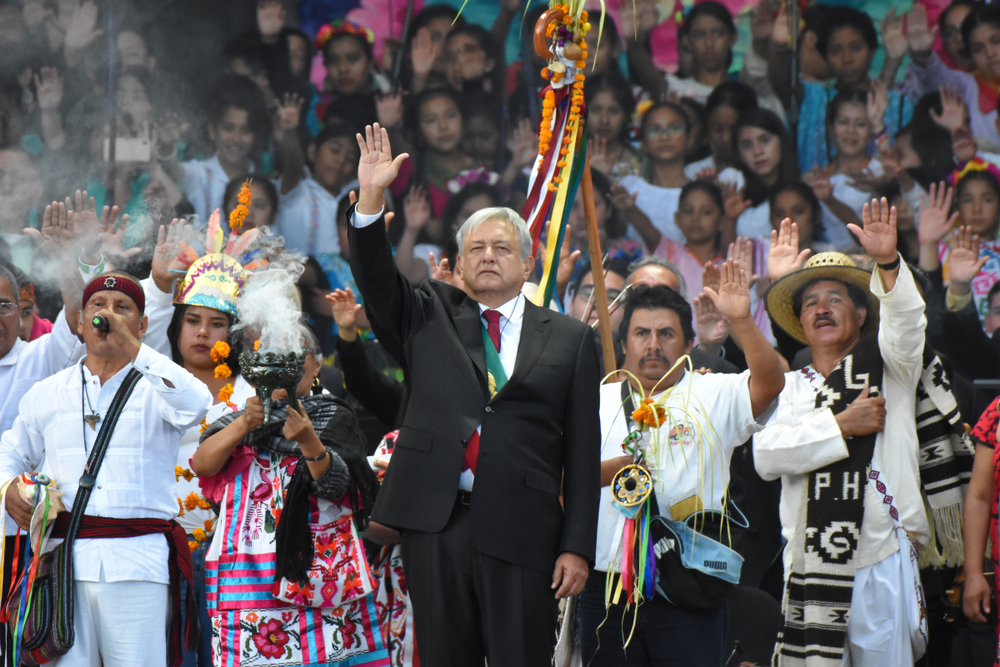 Visiting a classroom in a Catholic school, of a well-known prelature. I’m surprised to notice that they have removed the crucifix that used to be on the wall. Instead, outside the classroom, on a cork board, there is a huge mural colored by the children. It represents an enlarged multicolored logo of the 2030 Agenda, and a load of children’s postcards contain the students’ proposals for implementing the 17 UN goals. You know what they are: end poverty, raise taxes daily, ride donkeys on highways, have abortions at all hours, and recite the litanies of the criminal Tedros Adhanom every night.

After a while, listening to the radio, I hear a speech from Mexican President Lopez Obrador, who is really just Joe Biden after guzzling three bottles of tequila. The guy has been talking nonsense all week without even pausing to breathe. It’s his way of celebrating the 200th anniversary of his Independence. Specifically, he has insistently demanded from the King of Spain that we Spaniards ask for forgiveness for the conquest and evangelization of Mexico. Certainly, I love Mexico, I love Mexicanos (although I prefer Mexicanas), I love José Alfredo Jiménez, and I am crazy about Mexican food. But every time I hear this idiot complain about how my ancestors brought civilization to his, I can’t avoid thinking how Mexico would be a better place if we left Lopez Obrador for half an hour in the hands of the Aztecs, whom my distant cousins found, at the height of their cultural expansion, slicing guys open on altars and eating them with relish.

We have endured the Spanish black legend for too long as it was spread with passion, first by the English and French, and nowadays, by the whole anti-Christian universe. I often listen, barely hiding the tedium on my face, to long lectures on the Inquisition from people who must have looked it up on Wikipedia, and who do not know that, contrary to popular belief, Spain barely burned a handful of witches – about 300 women– in two centuries, while the Germans executed 25,000 of them.

I do not intend to get into a war of numbers, which would undoubtedly be entertaining, but personally I prefer to go out dancing. What I mean is that, no longer will uneducated people like our Aztec-totem-worshipping López Obrador, go unanswered. Whatever you may say, the evangelization of Mexico was not violent. The natives abandoned their old beliefs as soon as their political organizations collapsed. According to the Franciscan chronicler Motolinia, more than four million people got baptized after the fall of the Aztec empire, between 1521 and 1536. Obviously, those natives were aware that embracing Christianity was to side with the new powers that be, but to suggest that they were dragged, gagged and bound to the baptismal font is a stretch, characteristic of the intellectual poverty exhibited by the president of Mexico.

Be that as it may, those who removed the crucifixes are Christians – I suppose – and so are those who spread López Obrador’s nonsense. Some of them even apologizing to Mexicans for their evangelization, which could be likened to me apologizing to the Romans because Jesus used supernatural powers to carry out his healings to drive his message home  which was cheating, and what’s more, he brought down a very rich polytheistic Ancient Roman culture; in which, incidentally, the ultimate pre-Christian entertainment was to sit in a circus and watch lions dismember human beings alive.

I guess, when all is said and done, I don’t want them to go to hell, either. At the very least they should be forced to sit through a poetry recital by Amanda Gorman, a gala dinner with López Obrador, and a couple of Greta Thunberg lectures. Some will prefer to walk Dante’s circles.