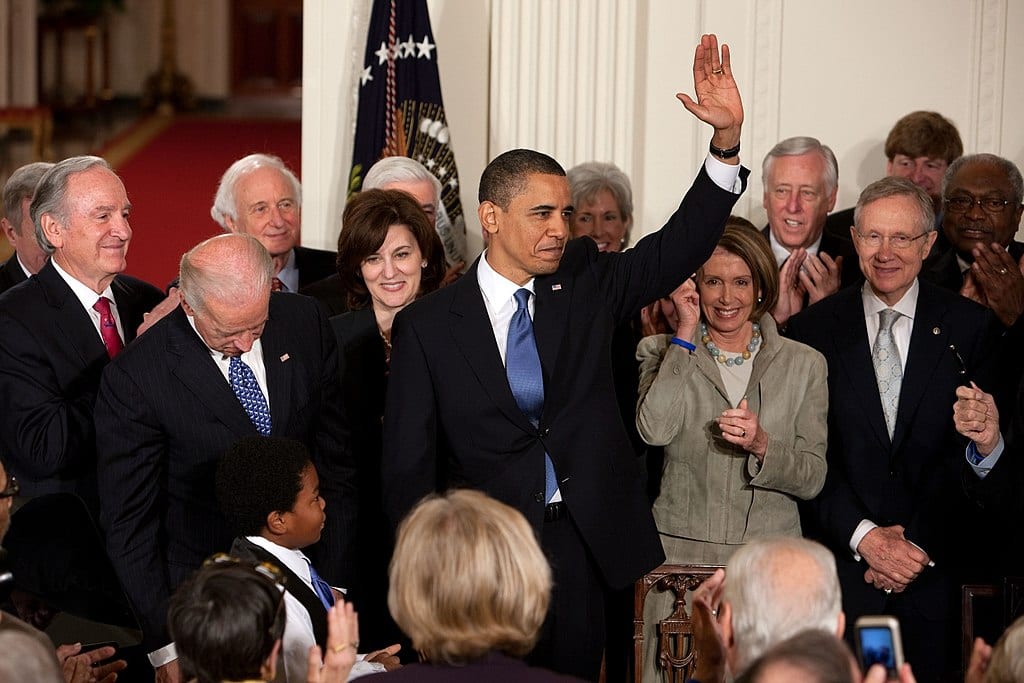 The campaign to impeach President Trump has begun

The time the article was posted: 12:19 p.m. — exactly 19 minutes after Donald John Trump was sworn in as the 45th president of the United States. The very first sentence began this way:

This week that campaign will begin to reach its conclusion as the impeachment trial of the president begins.

Make no mistake what we are about to see. This is the continuation of a slow-motion coup d’état by what can only be called the American Ruling Class. It is a televised middle finger to millions of Americans who elected Donald Trump for a reason — to put an end to an arrogant, frequently bipartisan, Ruling Class. A Ruling Class drunk on power and awash in corruption.

You know, to just be grossly generalistic, you could put half of Trump’s supporters into what I call the basket of deplorables. Right? The racist, sexist, homophobic, xenophobic, Islamophobic — you name it. And unfortunately there are people like that. And he has lifted them up … they are irredeemable.

And not to be forgotten this week as well is this telling remark from then-candidate Barack Obama in 2008:

And it’s not surprising then they get bitter, they cling to guns or religion or antipathy toward people who aren’t like them or anti-immigrant sentiment or anti-trade sentiment as a way to explain their frustrations.

However the trial of the president proceeds — on the road to his already foregone acquittal — right there in those words of Clinton and Obama is the underlying reason for this impeachment.

Take a hard look at the absolute resistance by Pelosi, Schiff, and company to calling Hunter Biden — and ex-Vice President Joe Biden — as witnesses. In an impeachment in which they insist that there must be witnesses, they furiously resist calling the Bidens. Why? Because to do so will reveal just how corrupt the Ruling Class has become in its quest for power and money.

The Hunter Biden dealings in Ukraine and China are merely the tip of the massive iceberg of corruption by Ruling Class elites who exploit their family connections in a seemingly endless quest for money and even more power.

This impeachment is going to backfire in an explosive fashion. Why? Because in this trial, conservative media will focus relentlessly on the Ruling Class corruption that is fueling it.

In the course of the last three years, it has become vividly obvious to millions of Americans just how corrupt the self-appointed Ruling Class elites have become. Three of the most obvious examples:

* As noted in this space last month with “The Vindication of Sean Hannity,” Hannity and his “ensemble cast” of journalists and lawyers have surfaced the spectacular corruption of the Obama FBI and Justice Department led by the FBI’s James Comey, Andrew McCabe, Peter Strzok, Lisa Page, and their fellow Department of Justice zealots. All involved in some role of directing the effort to stop a Trump presidency and then overthrow it.

* Then there is the Hunter Biden episode, detailed by investigative journalist Peter Schweizer in his bestselling book Secret Empires: How the American Political Class Hides Corruption and Enriches Family and Friends. In the book, Schweizer lasers in on the Hunter Biden dealings in Ukraine and China, both countries in which his father, the then-sitting Vice President of the United States, was playing a key role directing American policy.

* Not to be forgotten is this 2010 press release from the office of House Speaker Nancy Pelosi. It is headlined this way:

The remarks by Pelosi as presented in the transcript are perfectly vanilla. The usual of a politician dishing out praise for a cause she or he supports, in this case, as the release says, Pelosi supporting the idea of a prize to the “first team to build a car that gets at least 100 MPG equivalent in real world driving, is safe, and offers consumers more efficient vehicle choices.”

But curiously the transcript of Pelosi’s remarks don’t say what in fact she actually said. What she actually said in her remarks was captured on this video posted on YouTube by an outfit called NRGLab. In the video, the House Speaker quite deliberately mentions son Paul by name, noting he is there with her at the event. And after his mother’s appearance in the video is completed, the camera turns to Pelosi Jr. as he pitches the energy group Viscoil. Beneath the video NRG Lab says this:

Paul Pelosi Jr. is a member of management team of Viscoil Group of Companies and NRGLab.

Message: We have as part of our management team the son of the American Speaker of the House.

All of this, as mentioned, is the tip of a massive iceberg of Ruling Class corruption, with government power used to earn big bucks. And covered up by allies in the Ruling Class Leftist State Media.

The term “Ruling Class” has been around for ages in all manner of countries. But in 2010 it was used in its current context by Boston University professor emeritus Angelo Codevilla in his bestseller The Ruling Class: How They Corrupted America and What We Can Do About It. The book was based on a Codevilla article that first appeared here in The American Spectator and was expanded into a bestselling book with an introduction by Rush Limbaugh. Rush wrote this in his introduction, saying of his fellow Americans:

We belong to what Professor Codevilla calls the Country Class, meaning not the hick class, but the country.

We are the country. The Ruling Class is a minority. Fewer than 15 percent of Americans agree with the thought process, philosophies, goals, and objectives of the Ruling Class.

As Professor Codevilla points out, these people are a minority, and they have no relationship to the rest of us in the Country Class. Yet somehow we are now being ruled — not governed—- by these people.

And that, exactly, is what we are about to witness as this impeachment week unfolds. This is, in reality, about a corrupt Ruling Class determined to overthrow a duly elected American president precisely because he was elected by — and represents — the Country Class.

This impeachment, which literally began a mere 19 minutes after Donald Trump was sworn into office three years ago today, is one of the biggest mistakes the Ruling Class could possibly make. Every move they make will now shine a serious spotlight on just who they are, which of their family members and political buddies are being enriched at the expense of Mr. and Mrs. Country Class America. And more.

In short, we are about to see close up just how the Ruling Class game is played.

And one more thing. Let’s be clear. The real target of this impeachment isn’t President Trump.