Special Report Alexandra Chalupa,Arab Poet-Martyrs,Bassam Frangieh,Eric Ciaramella,Mike Cernovich,Whistleblower,Yale University The Radicalizing of Eric Ciaramella | The American Spectator | USA News and Politics
Menu
Special Report
The Radicalizing of Eric Ciaramella
It starts at Yale and a professor of Arabic who romanticizes terrorism.
by Anne Hendershott
" ... We are all martyrs." Palestinian resistance graffiti in the West Bank (Justin McIntosh/Creative Commons) 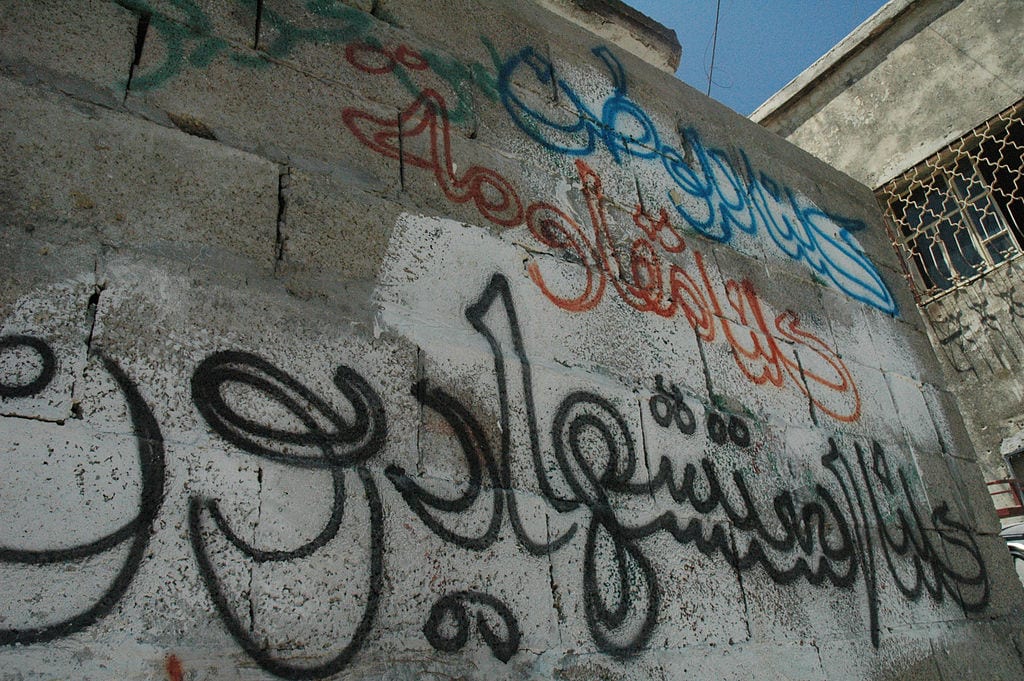 While the lawyers representing Eric Ciaramella, the alleged “whistleblower” in the Trump impeachment fiasco, describe him as having spent his entire career in “apolitical civil servant positions,” the truth is that Eric Ciaramella has been involved in radical political behavior throughout his life — including his years at Yale.

In fact, long before he was digging up dirt with the DNC’s Alexandra Chalupa about President Trump’s mythical collusion with Russia, Ciaramella was involved in leading a protest over what he believed was the poor treatment of Bassam Frangieh, a radical professor of Arabic studies at Yale. On April 15, 2005, then first-year Yale student Ciaramella dressed in all white to lead a contingent of 10 similarly dressed first-year Yale Arabic students to the offices of the provost and the president of the university to demand that the university provide an incentive to encourage Frangieh to stay at Yale. The students were unhappy because Frangieh had decided earlier in the school year to accept a tenure-track position at the University of Delaware.

Ciaramella helped to organize a campus-wide letter-writing campaign on behalf of Frangieh, which “identified flaws in the administration’s policies regarding language instructors at Yale.” According to the Yale Daily News, Bassam Frangieh was looking for an opportunity to teach more of the classes that he would like to teach. One of the protesters said, “His specialty is Arabic language and literature, and he wanted to teach some classes on style and poetry.” A week after the protest, Yale’s administration announced that they had “upped the ante with an offer competitive enough to keep one of its star language instructors from leaving” Yale.

It is likely that Bassam Frangieh wanted to use literature to be able to shape Yale’s undergraduates’ views on what he called the “heroic Arabic poet-martyrs” battling against the unjust occupation in Palestine. In 2000, Frangieh published a chapter romanticizing terrorism in a book entitled Tradition, Modernity, and Postmodernity in Arabic Literature. Ciaramella’s favorite Yale Arabic professor praised the heroism of Abd al Rahim Mahmud, the “first Arab poet-martyr.” Mahmud, who is often used to inspire terrorism and suicide bombings among Arab youth, was described by Frangieh as “carrying his soul in the palm of his hand” as he “threw himself into the cavern of death.” Romanticizing his terrorism, Frangieh recalls Mahmud’s “premature death at age 35, fighting a battle in an attempt to keep Palestine free from foreign occupation, [which] brought dignity to the hearts of his people. Through his death he eliminated the gap between words and action … he shall remain a symbol of heroism and pride for his people.”

In 2007, Bassam Frangieh signed an Arabic-language petition, “Not in Our Name,” which encouraged signatories to “stand together to thwart the Zionist-Crusader conspiracy.” Denouncing U.S. Iraq policy as a “barbaric onslaught of cowboy masters, world Zionist leaders and their local agents, Frangieh claims that the only reason for the invasion of Iraq was the Zionist plan.” A long-time supporter of the Boycott, Divestment, and Sanctions Movement against Israel — designed to “challenge international support for Israeli apartheid and settler-colonialism” — Frangieh was recruited to an even more prestigious post at Claremont McKenna College in 2007, where he is currently head of the Arabic Department for the five Claremont Colleges.

Eric Ciaramella was radicalized at Yale by professors like Bassam Frangieh. He was quickly recognized as a fellow traveler and became an insider in the Obama administration. Unfortunately, he continued that through the first two years of the Trump administration. In October 2016, Ciaramella was the guest of Vice President Joe Biden at a lunch to honor the prime minister of Italy. But, in July 2017, as members of the Trump administration began to suspect that Ciaramella, by then a career CIA analyst and Ukraine director on the National Security Council, was responsible for “high-level leaks,” he was removed from his post.

Journalist Mike Cernovich exposed Ciaramella back in 2017 in an article claiming that Ciaramella wanted to “sabotage” President Donald Trump. Cernovich was documenting meetings and lunches that Ciaramella was having with high-ranking officials at the DNC — including Alexandra Chalupa and the NSA. And, although ForeignPolicy.com and others attempted to disparage Cernovich as an “alt-right blogger” and one of “Trump’s Trolls, ” it seems that Cernovich was right all along.

What is most puzzling is how someone so young and so inexperienced as Ciaramella — whose history of radical politics is well documented — could have gotten so close to powerful people in the Obama administration, people like Susan Rice, Vice President Biden, and the highest echelons of the National Security Council. Worse, how is it that the Trump administration is still stuck with people like this?

3
Special Report
The Voter Manipulation Scheme That May Have Clinched the Georgia Runoffs for Democrats
by C. Murray