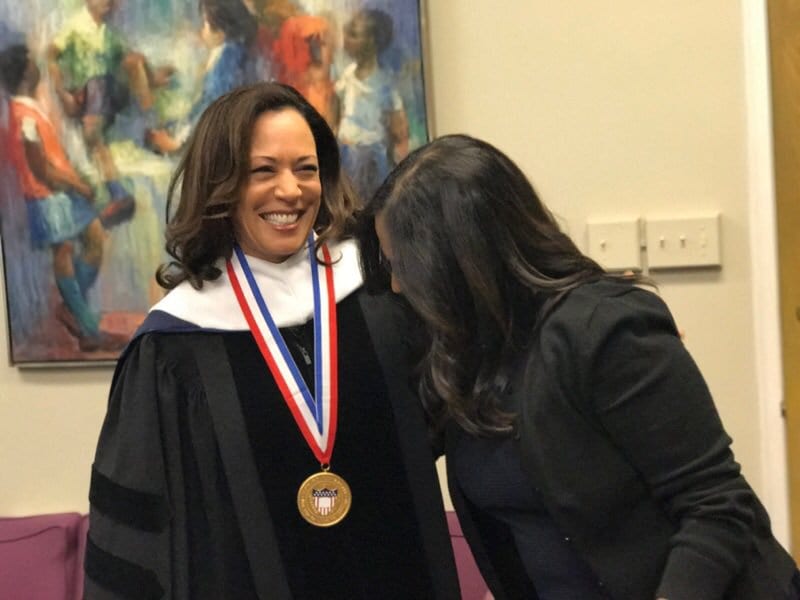 Hillary Clinton ran far to Donald Trump’s left and lost much of the country. It appears from the early crop of Democratic presidential contenders that the party’s 2020 strategy is to offer an even starker ideological choice. They sound ready to run an even more bi-coastal campaign than Hillary’s, which will leave much of the center open to Trump and keep the right galvanized. The buzz around Kamala Harris is this week’s window on the party’s far-left fixations. Harris is so far to the left she considers membership in the Knights of Columbus a hate crime. A few weeks ago, she took a run at a Trump judicial nominee for that high offense, treating him as the moral equivalent of a KKK member.

It appears that Harris and her colleague Dianne Feinstein are in a competition to see who can strike a greater blow for anti-Catholic bigotry. While Feinstein worries about the “dogma living loudly” within Catholic judicial nominees, Harris wanted to know if Brian Buescher was “aware that the Knights of Columbus opposed a woman’s right to choose when you joined the organization.”

For Kamala Harris, the only good Catholic is a bad one. But of course she has received almost no flak for her open display of anti-Catholic bigotry. Such radicalism barely even registers with the media, which has its own anti-Christian narratives to push, such as its ginned-up controversy about Karen Pence’s employment at an “anti-LGBTQ school.” CNN headlined one of its stories about the matter, “Pence Praises Wife Despite Controversy.”

For the Democrats and the media, the mere participation of Christians in public life remains an ongoing “controversy,” which they feel entitled to protest or report until they have disappeared from public life. That such a stance has driven Christians into the arms of Trump doesn’t seem to bother them. Kamala Harris thinks that she can seize upon this moment of secularist smugness. But it gives her even less national appeal than Hillary. Harris is the prototypical San Francisco Democrat, for whom most of the country’s population falls into a basket of deplorables. She is running on a platform of socialism, secularism, and sanctuary cities.

She likes to remind people that she is a long-time “prosecutor,” and she certainly has the brusque manners of one. But her politics betrays no such background. Her hostility to basic tenets of law and order make her sound like a spokeswoman for the ACLU. Her senatorial career has been defined by singularly rude treatment of Trump’s nominees in which she upbraids them for nothing more than supporting the enforcement of existing law.

So she does believe in a higher law — her own. She is particularly given to moralizing about Donald Trump’s “public corruption.” Yet she cut her own path to politics through the notoriously corrupt Willie Brown’s bedroom. In 1994, the Los Angeles Times noted that Brown had given his then-girlfriend, Kamala Harris, a state job:

Assembly Speaker Willie Brown, continuing his rush to hand out patronage jobs while he retains his powerful post, has given high-paying appointments to his former law associate and a former Alameda County prosecutor who is Brown’s frequent companion.

Brown, exercising his power even as his speakership seems near an end, named attorney Kamala Harris to the California Medical Assistance Commission, a job that pays $72,000 a year.

Harris, a former deputy district attorney in Alameda County, was described by several people at the Capitol as Brown’s girlfriend.

Somehow this never comes up during MSNBC’s discussions with her about the dangers of “emoluments” and the like. The Guardian observes that “Harris has spent much of the past 25 years distancing herself from Brown — she doesn’t mention him once in her political memoir.” Her ties to Brown not only complicate her anti-Trump moralizing but also undermine her image as a left-wing purist. By San Francisco’s standards, Brown and the beneficiaries of his patronage were seen as moderates. Brown prided himself on deal-making; today’s Democrats, whom Harris seeks to lead, pride themselves on refusing deals.

Harris has embarked on a race to the far left in which the greatest rewards go to the most radical candidates. To win this bidding war, she promises an America even more fundamentally transformed than Obama’s, one without borders but plenty of transgender bathrooms — an America that respects neither divine nor written law and treats Christianity as the only permanently scandalous impediment to public life.