by George Neumayr
At the unveiling of the monument to migrants in St. Peter’s Square (YouTube screenshot)

I arrived in Rome this week in anticipation of another defining liberal moment of this pontificate: the Pan-Amazon Synod, Pope Francis’ latest pretext to fiddle with Catholic discipline and doctrine. I haven’t been to the Vatican in some years. It was hardly a golden age under Pope John Paul II and Benedict XVI, but at least back then Vatican City had recognizably Catholic features. Now it looks like the United Nations Plaza.

As I walked down the hill to the Vatican, from the convent turned inn where I am staying, I noticed graffiti about “comrades” on the walls surrounding it — walls, by the way, far more imposing than Trump’s. One would have to be a criminal with Olympian talents to scale them. Yet what’s the first sculpture one encounters in St. Peter’s Square? A depiction of illegal immigrants, unveiled recently by Pope Francis. The immigrants are huddled together on a kind of ark — certainly not Noah’s, for the sculpture contains almost no religious content, though some interpret a Hasidic Jewish couple on board as Joseph and Mary. The sculpture looks completely out of place, plopped randomly near the arms of Bernini, which now appear more like the forearm of George Soros. 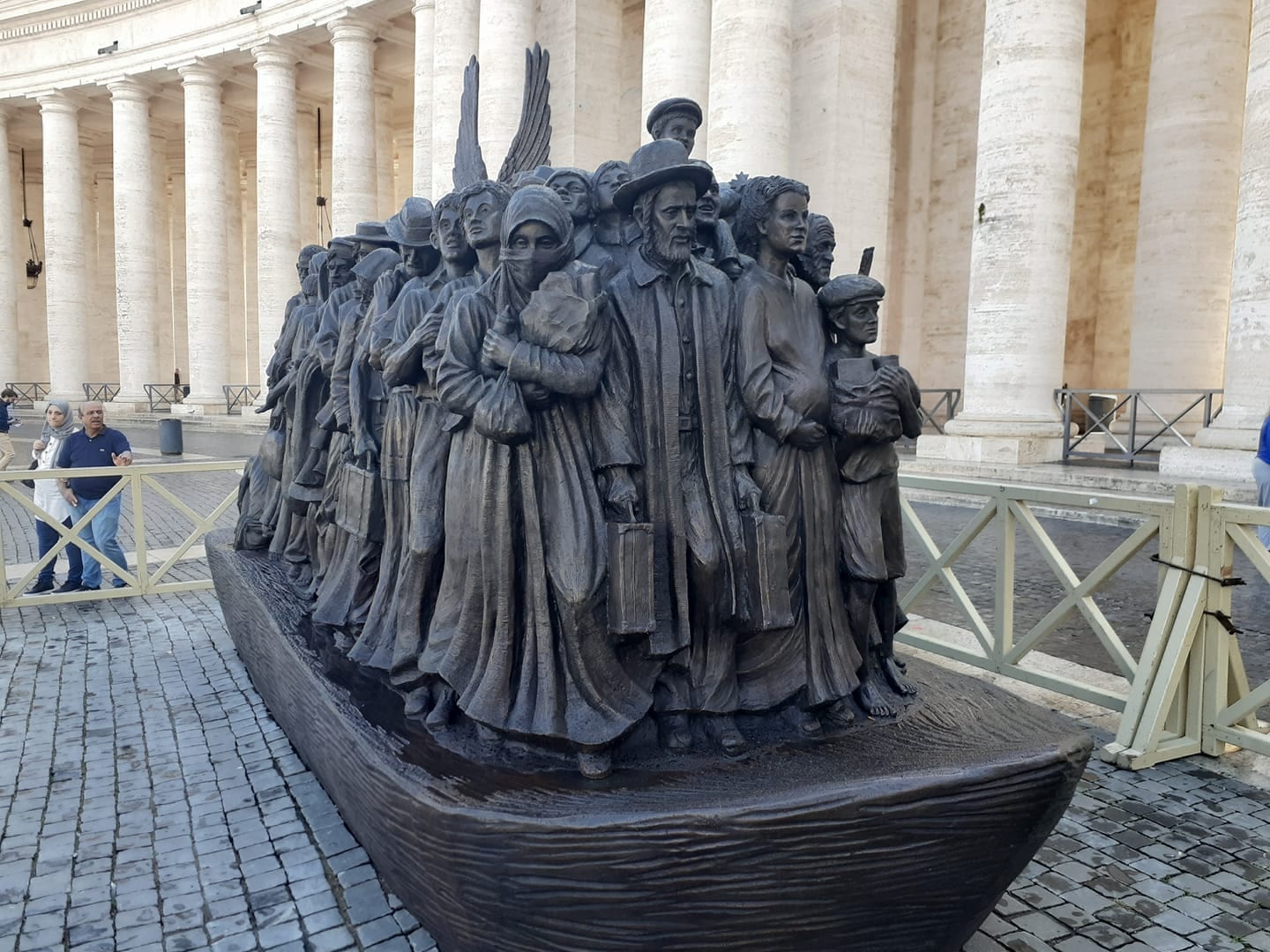 A visit to the Vatican was once an awe-inspiring religious experience. It now feels more like a trip to Disneyland. It exists primarily for tourists, not pilgrims. It is a bazaar of camera-snapping Asians, cackling Germans, thieving vendors, gum-chewing priests, and trysting middle-age couples. The overwhelming impression it leaves is that Catholicism is a religion of the past, not the present or future. Whatever the future of Islam, at least Muslims have enough regard for God to keep Mecca and Medina from turning into Touristville. Not so for FrancisChurch, which is hastening the death of Catholicism by self-indulgence, if not suicide.

One small example of FrancisChurch’s death wish is the ubiquity of a gay calendar sold in tourist shops throughout the city featuring handsome priests, some in suggestive poses. Women no doubt buy the calendar, but one suspects its primary consumers are the bishops, vocation directors, and clerical colleagues of these priests. I don’t know what is more depressing about the calendar: that the priests would voluntarily pose for it, or that their superiors are likely to buy it. In any case, it is a hideous illustration of a gayed-up religion, screwing around while the Church collapses under the weight of a gay pederasty scandal of epic proportions.

The very clerics who would buy such a calendar are descending upon Rome to debate the expansion of a married priesthood — a grimly ironic topic given that most of them are incapable of real marriage, owing to their lack of interest in women. The Pan-Amazon Synod, which starts on October 7, is supposed to solve the problem of too few priests in the remote wilds of South America. But why is that a problem? Isn’t this pope famous for saying, “I don’t want to convert you”? So what does it matter if Catholic missionaries don’t reach Amazonian Indians?

I picked up a copy of L’Osservatore Romano, the Vatican newspaper which reads less like a Catholic periodical than a back issue of the Nation. The sheer BS and left-wing propaganda of its contents are stunning: “Climate Change is a Challenge for Society as a Whole” (that was its front-pager); “The Theology of the Noun” (called the “Holy Father’s extemporaneous discourse,” which is too impenetrably flaky to even summarize); “The Green Alphabet of Pope Francis”; “Protect Forests to Ensure the Future of Humanity”; “Do Not Use God As a Pretext to Build Walls”; “For a World Free of Nuclear Weapons”; “Healthcare for the Poorest Too.” Those articles made up most of the issue. All of them bear upon this world, not the next one.

One article, however, did touch upon the upcoming Pan-Amazon Synod. It was written by Fr. Antonio Spadaro, one of the pope’s favorite Jesuits. Spadaro is famous for his anti-American bile and his relativism. He is the Jesuit who conducted the infamous interview in which Pope Francis said that the Church is too preoccupied with the killing of unborn babies and the destruction of marriage. In this article for L’Osservatore Romano, Spadaro tries to explain the “purpose” of the Synod. The article is an incoherent mess, asserting at once that the Synod will promote “evangelization” and the “search for new paths.” Don’t the two cancel each other out? Why would the Church need to evangelize a people from which the Church must “learn” and “listen”? It would appear that the point of the pope’s Synod is not for Catholics to evangelize Amazonian Indians but for Amazonian Indians to enlighten the Church.

On Friday, Francis brought some of them to the Vatican gardens for a planting session. But for Spadaro, the most important “seeds” are contained in the “ancestral wisdom” of Amazonians, whose belief system, we are led to believe, derives from divine inspiration. “The voices of the Amazon call on the universal Church to seek out new paths,” Spadaro writes. The Church has much to learn, he says, from the pantheism of “these peoples of the forest.” One gets the impression that Spadaro’s romanticizing comes less from visiting the Amazon than watching The Mission. A few months of roughing it with those peoples of the forest would probably cure him of his hankering for “indigenous spirituality.”

With all the talk of “listening” to Amazonian Indians, I would have expected to see some in Rome. I haven’t seen any. But I have seen plenty of German priests hanging out at Roman cafes and bloviating about them. “The hand behind this Synod is German,” one Vatican observer said to me. “Just as the German socialists pushed and financed the spread of Liberation Theology in Latin America,” he said, so they are now pushing this Amazonian nature-worship. The Synod is just an excuse to eliminate priestly celibacy, advance climate-change activism within the Church, and spread syncretism, he argues.

One of the Americans Pope Francis has selected to participate in the Synod is San Diego’s bishop, Robert McElroy. I remember McElroy from my days at the University of San Francisco. He was a protégé of the uber-liberal San Francisco archbishop, John Quinn, the gay mafia’s don on the West Coast. These days McElroy is a hopeless papal sycophant. But under Pope John Paul II, I remember him babbling on about faithful dissent. As a lackey for Quinn, he publicly distanced the archdiocese of San Francisco from the then-Vatican’s condemnation of gay adoption. McElroy would later play a role in the archdiocese’s partnership with a gay adoption agency in Oakland. In San Diego, McElroy has hectored Catholics who oppose climate-change activism and illegal immigration. Expect McElroy to join Spadaro in his blather about the profundities of Amazonian pantheism.

Orthodox Catholics visiting Rome view the upcoming Synod with horror. I went to a roundtable discussion on Friday at a hotel in Rome that highlighted this concern. It was hosted by Voice of the Family and featured such speakers as Roberto de Mattei, Marco Tosatti, Michael Voris, Michael Matt, Taylor Marshall, and John-Henry Westen.

“The Holy Father has entangled the Church in an anti-God philosophy, granting absolution to a political system that has as its primary end the overthrow of the Divine, of all that is sacred,” said Michael Voris. Roberto de Mattei, a historian, said we are witnessing the creation of a new religion under Francis, one that seeks to give the Church an “ ‘Amazonian face,’ ”, in the pope’s own words. Marco Tosatti said the event will simply give a papal imprimatur to religious relativism and political leftism. Taylor Marshall sees it as the culmination of modernism’s long march through the Church, a movement that has been gathering speed for over a century at least, and that seeks to replace Christianity with “humanism and globalism.”

At the last Synod, the one ostensibly held to strengthen the family, the pope ended up weakening it by endorsing adultery. At this one, he will play the same game, invoking “evangelization” to undermine it. All of his blather about a “synodal, listening” Church conceals the raw autocracy of his pontificate, a catastrophically willful attempt to remake Catholicism in his own left-wing image. He listens to no one save flunkies who already agree with him. His Amazonian affectations are a monumental act of condescension, just one more globalist lecture at hapless peoples on whom UN jerks and papal dilettantes can experiment.

I remember a few years back a story that came out about Bolivian tribesmen who had retained the classical music taught to them by Catholic missionaries centuries ago. The tribes had kept playing the compositions long after the missionaries left and passed them down to future generations. It was the modern churchmen around Vatican II who tried to wean the Indians off it and put guitars in their hands. But they weren’t interested in lame 1960s music and kept the old compositions. It turned out that thousands of those compositions existed, some of them given original adaptations. One of the big music companies turned them into a CD, and it became a hit.

The self-consciously modernizing Catholicism of Pope Francis is not a hit. It is a wilting waste of time, evident in the thousands of Italians who have stopping going to Church. According to Marco Tosatti, lapsed Catholicism in Italy has cost the Church in the last couple of years tens of millions of dollars (once they leave, they no longer pay the church tax). The Vatican recently announced that its budget deficit has doubled.

The irony of the pope’s worldly, temporally minded Catholicism is that it leaves the world bored. The Vatican’s groaning gift shops attract buyers not with encyclicals on global warming but with mementoes of its glorious past.