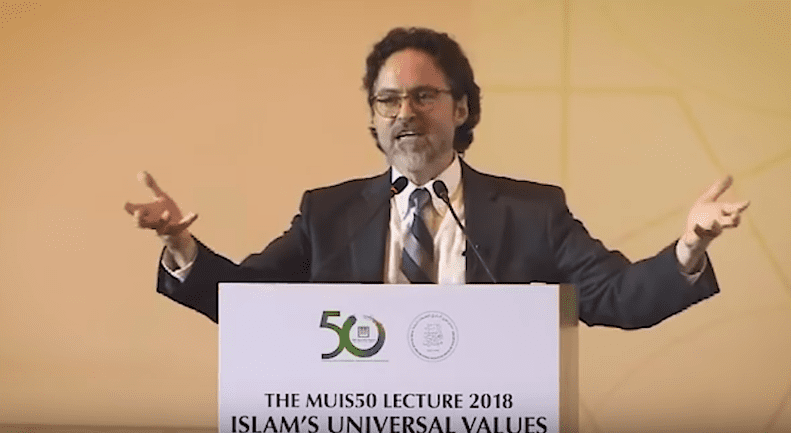 No matter how much political ideologies may differ, many face a familiar division over tactics. Is it better to be a loud radical demanding bold change from the outside? Or should one aspire to be a quiet pragmatist working diligently at incremental change from within?

This insider–outsider dynamic presently divides America’s Islamists. A recent furor concerns leading activist and scholar Hamza Yusuf and his decision to accept a role on the Commission on Unalienable Rights, a Trump administration panel led by Secretary of State Mike Pompeo. This appointment, along with Yusuf’s involvement with the United Arab Emirates (UAE), a well-established foe of the Muslim Brotherhood, has provoked howls of condemnation from prominent American Islamists writing on social media and in the Qatari media outlet Al Jazeera.

Is the federal government making a mistake by working with Yusuf? Are quieter Islamists like Yusuf — who some critics believe have grown adept at working from inside the system to advance incremental change — acceptable partners? Or are they just as dangerous as those angry radicals demanding sudden and wholesale change from the outside? In Yusuf’s case, it might be wise to take an attitude akin to the American view of Saudi Arabia: keeping their eyes wide open about the very real differences but also recognizing that common enemies threaten us both.

For more than three decades now, Yusuf — an American originally named Mark Hanson who converted to Islam in 1977 — has been lauded as one of the most inspiring and influential Muslim leaders. Just a month after the 9/11 attacks, the Guardian described Yusuf as “arguably the west’s most influential Islamic scholar” while noting that “many Muslims find his views hard to stomach, but he is advising the White House on the current crisis.”

In fact, at the time, many expressed concerns with the government’s embrace of Yusuf. During the 1990s, he had been described as a “firebrand” for his harsh condemnations of both America and Arab regimes. He also expressed openly anti-Jewish remarks, stating in 1995, “The Jews would have us believe that God had this bias to this small tribe in the middle of the Sinai Desert and all the rest of humanity is just rubbish. I mean that is the basic doctrine of the Jewish religion and that’s why it is a most racist religion, it really is.”

But according to his supporters, after 9/11 Yusuf ostensibly began to see the danger of such statements, recognizing a link between such rhetoric and others’ acts of violence. Yusuf’s Islamist critics decried his work with the Bush administration, which they argued lent legitimacy to the “War on Terror.” Sam Hamad at the New Arab, who describes the War on Terror as “murderous and generally devastating,” recently wrote, “It’s from this point that Yusuf gained a reputation as the kind of Muslim who Islamophobes and supporters of the War on Terror could like.”

Despite his critics in both Islamist and reformist circles, Yusuf was ranked 25th in the 2019 edition of The World’s 500 Most Influential Muslims. His high perch in the Muslim world has certainly drawn in critics and rivals. But the motivations for attacking Yusuf today go beyond simple jealousy and mere disagreement over political tactics for the advance of Islamism. The attacks against Yusuf are part of an international intra-Islamist conflict that has fragmented political Islam and its advocates.

One of the most unusual aspects of Yusuf’s background is the path he traveled to develop his education in Islam. As a convert, Yusuf was not raised in any specific Islamic tradition and so had a choice of teachers and schools of jurisprudence and theology. This led him to spend four years in the 1980s training with prominent clerics in the UAE, including Sheikh Abdullah Bin Bayyah. The UAE is an uncommon destination for Western Muslims committed to religious study. But his time in the Emirates clearly had an impact. Yusuf’s connections to the country have persisted. He recently accepted the position of vice president for the Forum for Promoting Peace in Muslim Societies, an Emirati organization at which he works under Bin Bayyah, his old mentor.

At the time of Yusuf’s training in the UAE in the 1980s, however, the sheikhdoms were not as unfriendly towards some forms of Islamism as they are today. It was in the 1980s UAE that Al Islah, a Muslim Brotherhood–based political movement, grew significantly. Yusuf’s mentor, Bin Bayyah, was closely involved with the Brotherhood’s leadership, serving as vice president of the International Union of Muslim Scholars, a Muslim Brotherhood clerical body led by the Islamist movement’s spiritual leader Youssef al-Qaradawi. Bayyah only left the organization in 2013 — at exactly the moment the Emirates turned against the Brotherhood.

Now the UAE and some other Arab monarchies see the threat that an empowered Brotherhood presents. The UAE even designated the Brotherhood and its loudest American spawn — the Council on American-Islamic Relations (CAIR), the Muslim American Society (MAS), and the aid charity Islamic Relief — as terrorist organizations in 2014.

These same Muslim Brotherhood–aligned organizations, meanwhile, are now most closely linked with the Turkish and Qatari regimes, both of which today stand in confrontation with the UAE and its Arab allies.

Yusuf and Bin Bayyah, despite their existing connections to international Islamist groups, remained aligned with UAE policy. In fact, in their roles as theologians, they offered new justifications for support of the Emirates and in opposition to the Muslim Brotherhood’s revolutionary Islamism and “Arab Spring”–style protests, arguing that Islamic scripture encourages Muslims to accept rulers who maintain order, even if they are imperfect.

Seemingly inspired by his teacher and mentor, Yusuf now argues that the revolutionary aspect of Brotherhood-based Islamism derives from Marxism and that both are heretical in the belief that man can create something equating a utopia through secular political systems. Again, this appears a very different set of arguments compared to those preached by Yusuf during his incendiary 1990s period.

Notwithstanding the question of whether Yusuf’s shifts in ideology are genuine or cynical, idealistic or pragmatic, he has made many encouraging comments opposing Islamism that warrant revisiting. Most notable are his remarks at the Reviving the Islamic Spirit (RIS) conference in December 2016. Yusuf insisted on the importance of understanding Islamist terrorism as rooted in Islam before warning, “What’s been done to Islam is it’s been turned into a political ideology by a certain group within the Muslims and so what’s happened, by making it a political ideology and saying it can only be practiced within the framework of a political ideology, is a major problem in our community.” Yusuf further noted that the Muslim Brotherhood was central to this political ideology and “from that broke of Hizb ut-Tahrir and other groups. And Al-Qaeda comes out of that chain.”

For making such statements, Hamza was denounced; his critics insisted that his words put Muslims in danger and that he must apologize. A Middle East Monitor article published in January 2017 was titled, “Hamza Yusuf is no brother to the Muslim Brotherhood.” Writer Tallha Abdulrazaq asserted that “Hamza Yusuf is providing additional ammunition to tyrants such as Egyptian President Abdel Fattah Al-Sisi who is already responsible for a campaign of mass murder.”

In stark contrast with his comments in the 1990s, at the RIS conference, Yusuf also named the ancient hatred underpinning Islamism and the Brotherhood: “Yeah, we have some of the worst racism in our own community…. The anti-Jewish rhetoric that you hear in the Islamic community is horrific.”

But all these encouraging sentiments do not square at all with the fact that Yusuf continues to lead Zaytuna, the Muslim college he founded with Islamist activists and anti-Israel radicals Zaid Shakir and Hatem Bazian, both of whom possess their own horrific records of Islamist and anti-Jewish rhetoric. Bazian has openly preached violence, and in 2017, his employer, the University of Berkeley, condemned his dissemination of two virulently anti-Semitic memes on social media.

Zaid Shakir is also notorious for his radical positions. For example, in a 2001 article in defense of political Islam and in opposition to Muslim alliances with Jews and Christians, he declared, “Islam presents an absolutist political agenda, or one which doesn’t lend itself to compromise…. At this juncture, Allah warned the Muslims against seeking the aid of the Jews and the Christians. Furthermore, He warned that whoever sought support from these groups was in their camp.”

Although both have continued to work with Yusuf, in the face of staunch Islamist criticism, they have made it clear that they do not always agree with him. So considering his global Islamist condemnation, and even mild reproach from his own colleagues in California, is Yusuf now a genuine moderate, or just a less extreme Islamist?

That Yusuf and Bin Bayyah now oppose the Muslim Brotherhood and have aligned with the UAE is certainly a significant improvement over the machinations of the Muslim Brotherhood. But there is little doubt that Yusuf and Bin Bayyah remain Islamists, too. Affirming the legitimacy of sharia is still a rejection of America’s constitutional values. In 2014, Yusuf signed a letter to ISIS condemning the group’s tactics but welcoming sharia law. The 16th point from the letter states, “Hudud punishments are fixed in the Qu’ran and Hadith and are unquestionably obligatory in Islamic Law.”

In the global conflict with radical Islam, however, choosing to accept only those completely committed to American secular democracy is a luxury we perhaps cannot afford. While anti-Brotherhood Islamists must ultimately also be opposed, it would nonetheless be welcome if more Muslims chose Hamza Yusuf and the Emiratis over Qatar, Turkey, and the Brotherhood.

David M. Swindle is a fellow for Islamist Watch, a project of the Middle East Forum. He is also the Southern California associate of the Counter-Islamist Grid. Follow him on Twitter @DaveSwindle.