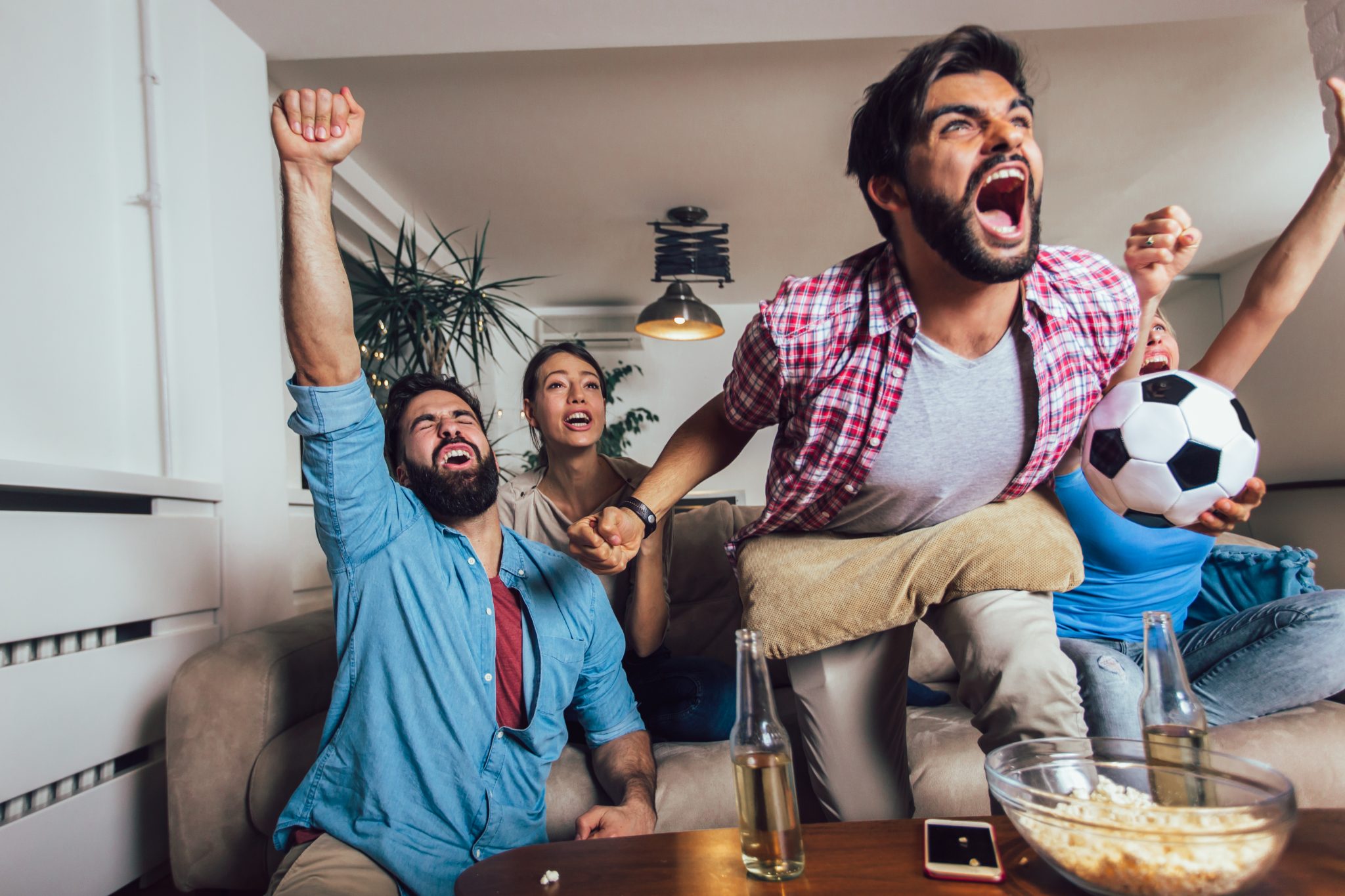 You know you’re a little tense when you’re able to play a Safri Duo hit simply resting your index finger on the underside of a bucket. Spending so long on lockdown affects the nervous system. Irregular appetite, screaming outbursts, and biting your neighbors are all common side effects. Experts believe that this will go on until sports events are broadcast again. The Desperate Women’s Association has called on TV programmers to take responsibility: “Put some soccer back on, for God’s sake, even if it’s the 1993 Third Division league matches!”

Us men channel 95 percent of our testosterone into televised sports. We use the remaining 5 percent bumping into other drivers at traffic lights. The suspending of the soccer league, perhaps the greatest male genocide in history, is causing a lot of guys to wander around in a state of unrest, with nowhere to vomit the energy we normally spend insulting the players. In other words, we are super-vitamined and, unless someone intelligent starts a world war right now and sends us to the front, we’re likely to keep on increasing our energy reserves with unpredictable consequences. In fact, in my building we’ve already witnessed the first male deaths from self-combustion.

Last night, the wife of a friend of mine phoned. She was desperate because Oscar is a guy who, raised in captivity, usually consumes about 20 hours of football a day. He even watches the foosball games at his local bar. During these homebound days, his family had started noticing something was off. Their worst suspicions were confirmed on Monday at lunchtime, when Oscar’s son stretched out, reaching for the bread basket, and Oscar reacted by getting up and improvising an overhead shot that sent the basket into the corner of an open window. Oscar celebrated the goal pulling his shirt over his head and running blindly through the house with his fists raised.

In the last few days, his condition has deteriorated. Finally, his wife has found him catatonic, clinging to the bathroom ceiling. After a brief conversation — “Come down from there right now! We just got it painted, you idiot!” — Oscar was showing clear signs of excess energy, along with a certain discontent with everything that has happened in the universe from the moment Eve took a mouthful of that forbidden fruit up to today. Then it occurred to his wife to try something. She placed a light bulb in his hand. It lit up immediately. Newton would be proud. Now Oscar lights up the whole neighborhood, and he’s stopped acting up at home.

It’s important to relax. I’ve read up on it. Negative thoughts need to be redirected into the heart of Mother Nature, and she will cover you with, I don’t know, leaves, rain, moss, acorns, or whatever she can provide. The key is to be patient. Control your breathing. And choose your inspirational readings wisely. Last night I started reading Alejandro Jodorowsky, and it worked like a charm. By the third line, I was snoring.

Today I started an intensive orientalist therapy that is the latest zensation in Silicon Valley. So there I was, at the crack of dawn, shirt unbuttoned, with 90 percent of my body hanging out the window. I spent half an hour trying to connect with the peace of the cosmos. As I wasn’t feeling anything, I tried to find myself, keeping still, eyes closed, in sleeping crane position, for 15 minutes. I was nowhere to be found, though. So I resorted to laughing my ass off like they taught me in the Laughing Therapy for Dummies lessons, but that made me even more uptight, because I couldn’t figure out if it was just a fit of hysterical coughing or coronavirus that had come over me. Finally, irritated, with my hairs on end, exhausted from the Zen relaxation, and hyperventilating like an outboard motor, I decided to try a good old-fashioned Lord’s Prayer, and all the nonsense vanished at once. Grandma’s always right.