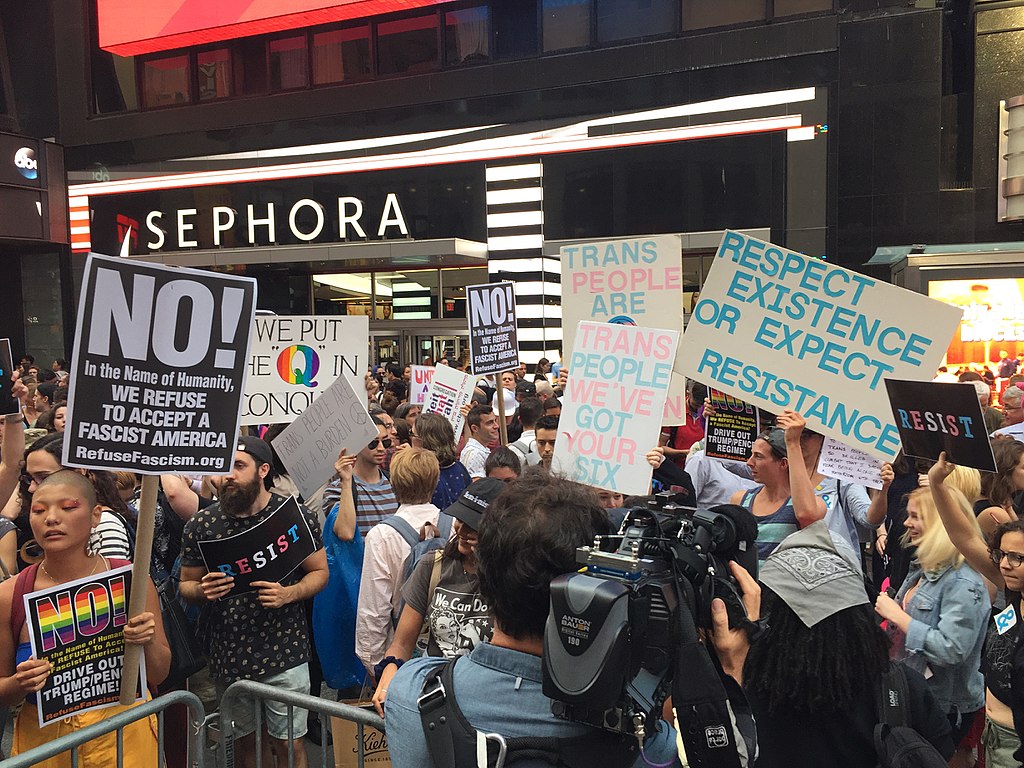 After 24-year-old De’janay Lenorra Stanton was found fatally wounded last August on the South Side of Chicago, the story received nationwide attention. This was not because homicide is rare in Chicago, where 589 people were murdered in 2018, nor was the method of Stanton’s death — a single gunshot to the head — newsworthy in a city notorious for armed violence. Rather, what made this crime a subject of national attention was a matter of identity and presumed motive. Stanton’s murder highlighted “the urgent need to address the epidemic of violence against the transgender community across the U.S.,” declared Helen Parshall of the LGBT activist group Human Rights Campaign. “Stanton’s death marks the 18th known killing of a transgender or non-binary person this year,” Parshall wrote, bemoaning “this tragic epidemic” of anti-transgender violence.

Every time such a murder is reported, the media repeats and elaborates this message, as in the case of the recent murder of Dana Martin in Montgomery, Alabama, which was reported by the New York Times: “At least 26 transgender people were killed in 2018, the majority of them black transgender women, according to the Human Rights Campaign. In 2017, advocates reported at least 29 transgender people fatally shot or killed by other violent means.”

Police in Montgomery say they have no suspects in the murder of Martin, who was found shot death in a car Jan. 6, thus becoming “the first known transgender person killed this year in the United States.” A local LGBT activist told the Times that murders of “trans people of color are just happening more and more often and very little is being done about it.” This is self-evidently false, as even the statistics cited by activist groups indicate that the number of such crimes declined about 10% in the past year, despite the rhetoric about an “epidemic” of anti-transgender violence. As to the question of what is “being done about it,” the police in Montgomery, as in other cities, say they’re doing their best. There were more than 17,000 homicides in the United States in 2017, the most recent year for which Justice Department figures are available, and the reported number of transgender victims was a minuscule fraction of a single percentage point of those murders. No one should imagine, of course, that the liberal media and activist organizations have suddenly taken an interest in supporting the law enforcement community and urging them to bring criminals to justice. No, all the noise about an alleged “epidemic” of anti-transgender violence is about blaming President Trump.

Last year, Beverly Tillery, executive director of the New York City Anti-Violence Project, declared in a Huffington Post column: “Many people have asked if the current regressive political climate legitimized by the language and policies of the Trump administration and others could be contributing to the rise of hate violence. Our answer is yes.… Over and over, President Donald Trump and his administration have attempted to erase, demonize and discriminate against members of the LGBTQ community.” Tillery was one of the sources quoted this week by CNN’s Jen Christensen parroting the claims of transgender activists that “violence against the community is getting worse,” and pointing the finger of blame directly at the White House:

Activists say anti-trans rhetoric stigmatizes the community and raises the risk of violence. …

Tillery, of the New York City Anti-Violence Project, feels that Trump has created a “really scary time for the whole LGBTQ community.”

“Every week, there is another news event that is equally triggering and terrifying, that leaves people not knowing where they can be safe. They are left with an uncertain future in this country,” Tillery said. “When you dehumanize people and try to erase them completely from existence, it emboldens those who hate this community, and no one is really stopping them, aside from the community rising up.”

Of course, we must keep in mind the fact that the reported number of transgender homicides has actually decreased since Trump became president, but also note that the national media didn’t bother paying attention to such crimes until after he was elected. We don’t actually know how many transgender people were murdered during Barack Obama’s eight years in the White House, because it wasn’t until Trump was elected that liberal journalists started hunting for evidence of a “climate of hate” they could blame on the Republican president.

Even if one were willing to stipulate, arguendo, that Trump is guilty of “anti-trans rhetoric” or otherwise responsible for creating a “really scary time for the whole LGBTQ community,” however, such claims are a non sequitur when we examine the motives and circumstances in cases that constitute the alleged evidence of a “climate of hate.” Consider an October 2017 murder that occurred in Nueces County, Texas. Sheriff’s officers responded to a call and found the body of 47-year-old Juan Montes, also known as “Stephanie Montez.” According to the initial report in the Corpus Christi Caller-Times newspaper, “Medical examiner Heraldo Pena said authorities initially believed the person was a woman; the person was wearing a dress and make up. They discovered later the person was male and that he had been shot in the chest, abdomen and a shoulder.”

That report inspired indignation among activists who complained “Stephanie” had been “deadnamed” and “misgendered,” as if this were worse than being shot to death. However, Juan/“Stephanie” had not undergone sex-change surgery and had male genitalia, and he had not legally changed his name, but such facts mean nothing to activists whose lives are apparently organized around being perpetually outraged over perceived anti-transgender prejudice. The national media eagerly pander to these activists and their counter-factual ideology, which explains why the death of “Stephanie Montez” was featured in a Nov. 10, 2017, New York Times article headlined, “Violence Against Transgender People Is on the Rise, Advocates Say.” The article quoted the ubiquitous Beverly Tillery as an authority for the assertion that there had been “a spike in incidents of hate violence” since Trump’s election: “There is an increased climate of hate that is, in some cases, being allowed to grow.”

Unfortunately for the climate-of-hate theorists, the facts in the Nueces County murder of Juan/“Stephanie” contradicted their theory. Four people — Cedric Green, 39, Randy Dorsey, 41, Chloe Huehlefeld, 36, and Jace Montange, 22 — were charged in connection with the shooting. Prosecutors say Green had previously sold drugs to Juan/“Stephanie” and that Green organized the murder plot because he suspected Juan/“Stephanie” of having stolen $20 — four rolls of dimes — from his girlfriend, Huehlefeld. Both Green and Huehlefeld were subsequently convicted and sentenced to prison; Dorsey was sentenced to 10 years’ probation after accepting a plea bargain in return for testifying against his co-defendants; the trial of Montange has been delayed. Anyone who cares to research this crime must conclude it had nothing to do with “anti-trans rhetoric” or a “climate of hate,” nor is there any reason to believe Cedric Green and his crew were Trump supporters.

Of course, the New York Times never followed up to inform its readers of the outcome of the “Stephanie Montez” case. This is a discernible pattern in national media coverage of such cases. A transgender victim is murdered, activists draw attention to the crime, national media report it with quotes from activists decrying the “epidemic of violence” supposedly inspired by “hate” and then… silence. You can hear the crickets chirping while you wait for the national media to report on the outcomes of these cases, once police put the cuffs on a suspect. Over and over, these crimes become strictly local news after it is determined that the murdered transgender person was killed for something as squalid as the stolen $20 in dimes that led to the murder of Juan/“Stephanie” in Nueces County.

For example, in June 2017, it was reported that 17-year-old Rayquann Deonte Jernigan, a/k/a “Ava Le’Ray Barrin,” had become the “Youngest Trans Murder Victim In The U.S. This Year.” Was this murder caused by a Trump-inspired “climate of hate”? No, according to police in Athens, Georgia, this fatal shooting was “the culmination of a feud between two transgender groups.” A judge dismissed a murder charge against the accused shooter, ruling that Jalen Breon Brown, 21, acted in self-defense during a fight with Jernigan. Or what about the March 2018 murder of Darrel “Amia Tyrae” Berryman in Louisiana? The Human Rights Campaign reported that Berryman, “a transgender woman of color,” had become “the seventh known homicide of a transgender person this year.” Was Berryman killed by a Republican voter? No, the police charged Dedrick Butler, a 22-year-old convicted felon, with murdering Berryman in a $55-a-night East Baton Rouge motel room where “Amia Tyrae” was working as a prostitute.

Quite frankly, many of these murder victims seem to spend a lot of time in bad neighborhoods hanging around bad people who do bad things. If it weren’t for activists promoting the “climate of hate” narrative, and a liberal media establishment eager to seize on these crimes for anti-Trump propaganda purposes, homicides like these would never be more than local news. But the activists have their agenda, and so when police found De’janay Lenorra Stanton shot in the head last August, the victim’s name was added to the roll honored on the “Transgender Day of Remembrance” in November. When police arrested a suspect last week, however, it was strictly local news.

According to police, Stanton had been having sex with a 17-year-old named Tremon Hill, “a lanky Phillips High School student who… played on the school’s basketball team.” Hill was concerned about some photos he had sent to Stanton and was reportedly suicidal over his involvement with Stanton, who worked as a prostitute. The Chicago Sun-Times reported Sunday: “Stanton received a text from Hill the morning of her killing asking her to meet him” in a parking lot, according to the prosecutor. “Just after 11 a.m., Hill is alleged to have shot Stanton in the head and left her lying on the ground outside of her car.”

Not a Trump voter. Just a high-school kid distraught about his involvement with a 24-year-old transvestite prostitute. This doesn’t fit the media’s “climate of hate” myth, of course, and so it’s strictly local news. Tune in to CNN and you can hear the crickets chirping.