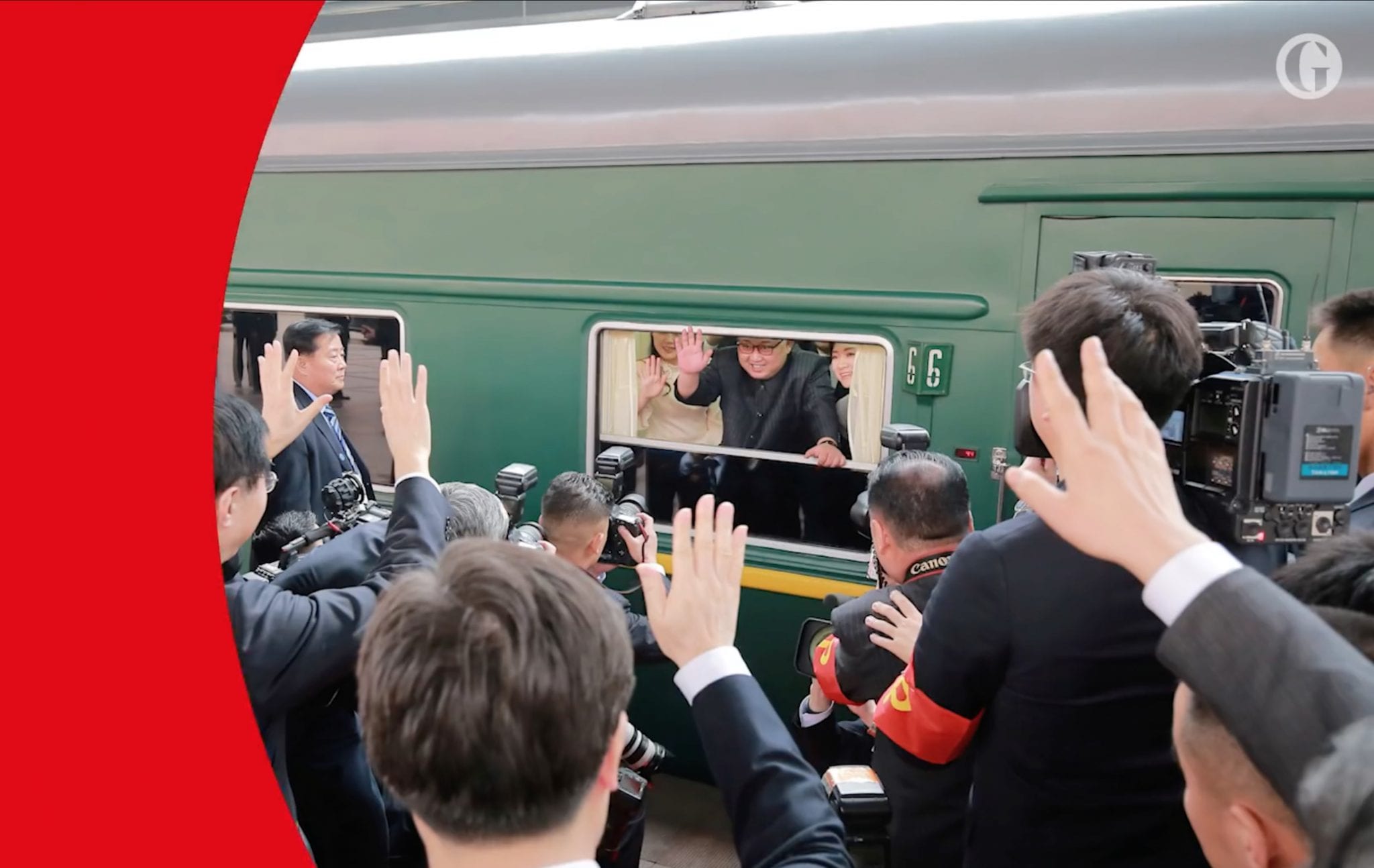 Shrouded in secrecy, hidden in an armored train, Kim Jong Un left North Korea for the first time since taking over its hereditary dictatorship, summoned to Beijing for talks with Chinese president-for-life Xi Jinping. Their three-day meetings began on March 25.

Kim had obviously been ordered to Beijing to receive instructions on what he should and shouldn’t do in his coming meeting with President Trump, still supposedly to be scheduled in the next month.

The Kim-Xi meetings came at a time when, as reported by the Financial Times on the basis of Chinese “official data,” China had virtually cut off North Korea’s oil supply. Whether or not the oil supply had actually been cut, China wants to appear as though it is being tough on North Korea before the Trump meetings.

While China and the UN want to appear tough, the leaders of two countries — South Korea and Japan — are lining up to get Kim to the negotiating table before Trump does.

South Korean President Moon Jae-in has talks with Kim scheduled for about April 27. The agenda for that meeting strangely doesn’t include anything about North Korea’s nuclear weapons or missiles. If we credit Moon with any diplomatic subtlety, that omission could be at his request because Moon can’t and shouldn’t make any deals with Kim before Trump does. The Kim-Moon talks will be purposed for smiles and publicity, nothing more.

Japanese Prime Minister Shinzo Abe is also seeking talks with Kim, which apparently haven’t yet been scheduled. He may have been blindsided by Trump’s acceptance of direct talks with Kim without the necessary preconditions. But, like Moon, Abe knows he can’t make any deals with Kim before Trump does. He wants to establish a communications link between them that doesn’t depend on the U.S. There are many ways in which that link could fail, but it could also become a safety valve through which Abe could carry messages confidentially and thus become more confident in Japan’s position.

All of Kim’s meetings and prospective meetings mean that the leaders of the nations whose interests will be most directly affected by the Trump-Kim talks lack confidence in one or probably both of the direct participants.

China lacks confidence in Kim because of his personality and his nation’s ideology which makes him a demigod. Kim could have chosen Iran’s path by quietly developing deployable nuclear weapons and the missiles to deliver them. Instead, the young, inexperienced, and hotheaded Kim chose to make their development a matter of conflict by repeatedly threatening the United States — and Japan and South Korea — with attack.

During the tenure of Deng Xiaoping, one of Xi Jinping’s predecessors, China’s announced strategy was the “slow rise,” never claiming leadership or dominance. Xi, controlling China’s massive powers developed under Deng, is far bolder, asserting China’s powers from the South China Sea to Pakistan and beyond. Kim’s aggression, which is anything but subtle, interferes with Xi’s plans so long as it remains blatant.

Xi wanted to instruct Kim to make some sort of deal with Trump that would first, not reveal China’s massive assistance to Kim’s nuclear and missile programs and, second, take advantage of Trump’s assumed gullibility. From China’s standpoint, the best outcome in the Trump-Kim meeting would be the same kind of sucker deal as Bill Clinton made with Kim’s father in 1994. The possibility of that was reduced substantially by Trump’s appointment of John Bolton as national security adviser.

Messrs. Moon and Abe, on the other hand, lack confidence in Trump. The former, understandably, desperately seeks to calm the crisis between America and North Korea. Any new Korean war would be fought on South Korean soil and would likely cause millions of deaths. Bolton’s appointment increased Moon’s unease precisely because Bolton will prevent Trump from making a bad deal. Despite Bolton’s aggressiveness toward North Korea, his background as an arms controller and diplomat (yes, Bolton can be diplomatic) will prevent Trump from falling into another bad deal.

Shinzo Abe is also caught in the dilemma caused by Japan’s lack of confidence in both Kim and Trump. Japan would likely be attacked in any new Korean war, possibly with nuclear weapons. North Korea has flown its missiles directly over Japan and, though it’s unclear that Kim’s missiles can deliver an attack on the U.S., they can clearly reach Japan in minutes.

North Korea has leaked one unacceptable offer that it may make in Kim’s meeting with Trump, the withdrawal of all American forces from South Korea. Risible as it is, that would be typical of the Kim regime.

Former secretary of state Henry Kissinger gave context to the planned Trump-Kim meeting in testimony to the Senate Armed Services Committee in January. Kissinger said, “North Korea acquired nuclear weapons to assure the regime’s survival. In its view, to give them up would be tantamount to suicide. An outcome that was widely considered unacceptable is now on the verge of becoming irreversible.”

The unacceptable outcome Kissinger referred to is acceptance of North Korea’s threat as an unchangeable fact subject only to deterrence. But can North Korea be deterred? At what price can that deterrence be achieved?

All the talk of “denuclearizing” North Korea is simply fantasy. To accomplish that, both China and North Korea would have to agree to the kind of all-encompassing inspections and verification of “denuclearization” that is lacking in the 2015 Obama agreement with Iran. Neither nation will agree to that but Trump can’t accept anything less.

Because verifiable “denuclearization” of North Korea is impossible, what’s left for the president to accomplish? Nothing of any substance.

The president will be under enormous pressure — from the left in America, from South Korea and Japan and other allies — to make some sort of deal with Kim. Those pressuring him will conveniently forget that North Korea has violated and renounced every agreement it has ever made. From the 1953 armistice that ended the Korean War and the Nuclear Non-Proliferation Treaty of 1972 to the Clinton “Agreed Framework” of 1994, the Kim dictatorial dynasty has renounced and violated them all.

Deterrence has failed to prevent North Korea from pursuing its nuclear and missile programs. It has failed to even take the edge off Kim’s aggression.

From that we have to conclude that North Korea, like Iran, is not susceptible to deterrence by diplomacy or any force we now have or are likely to have in the near future.

There are some, including outgoing national security adviser H.R. McMaster, who advocate a “bloody nose” attack on North Korea that would serve as a deterrent to future aggression and possibly decapitate Kim’s regime. It is a truly stupid idea because there is no way to calibrate such an attack that would not result in total war on the Korean Peninsula, probably reaching Japan and U.S. territory.

We are, then, left with the choice between Kissinger’s unacceptable outcome and a war which, as I noted above, will almost certainly result in the death of millions. For that reason, the Trump-Kim meeting cannot rationally result in anything better than an agreement to talk again.