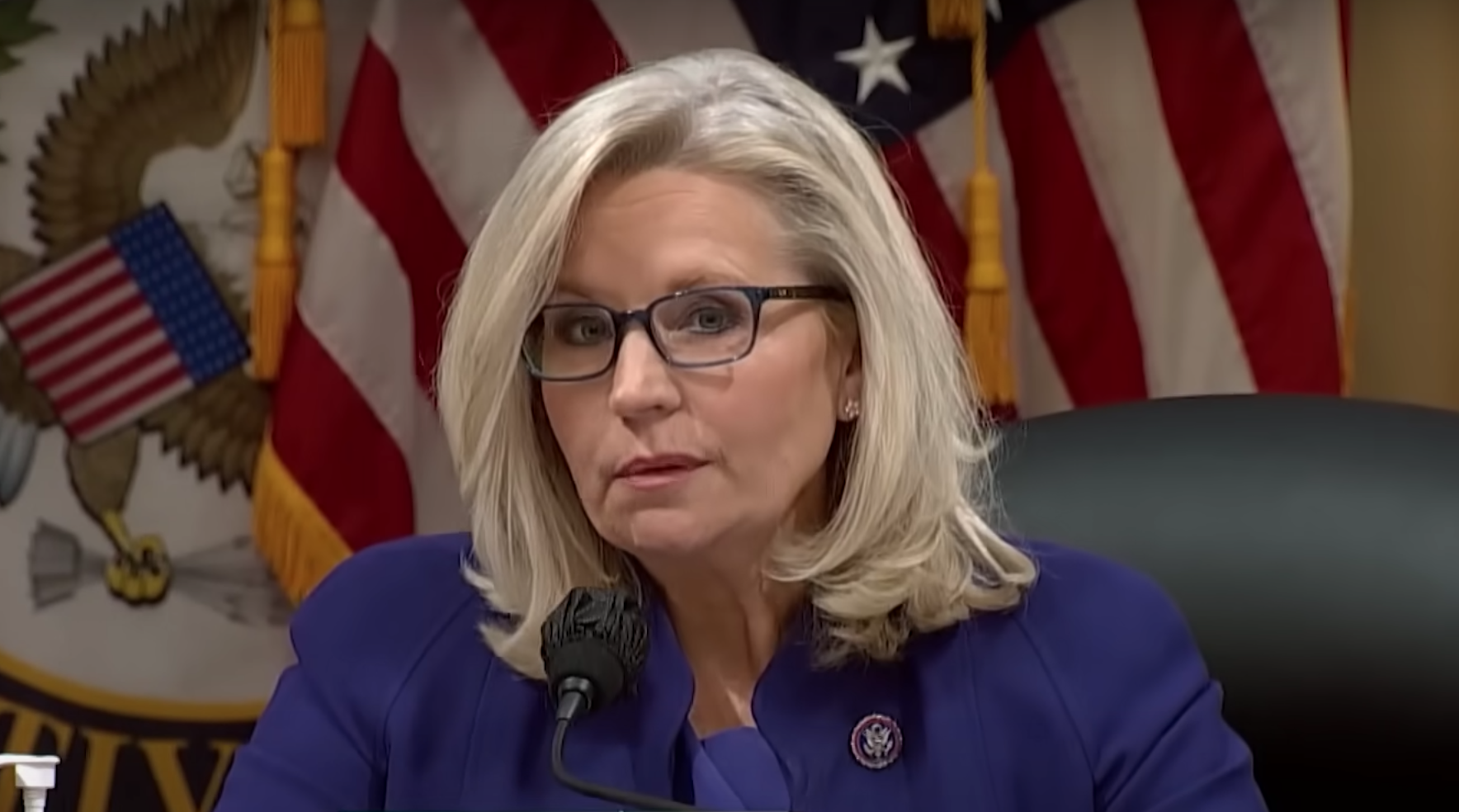 That’s exactly what those four “criminal referrals” from the Jan. 6 Committee against former President Donald Trump are.

But, as the year ends, let’s go through the referrals featured in the committee’s 154-page report — the report of a witch hunt from the witch hunters.

Specifically, the committee recommended that prosecutors pursue four charges against Trump. They are:

Let’s start with No. 1, “Obstruction of an official proceeding of Congress.”

First of all, Trump did not obstruct anything. He addressed a completely peaceful rally on the White House Ellipse before the events at the Capitol. It was a rally where told the tens of thousands gathered together to go protest “peacefully and patriotically.”

There was not a single word said about “obstructing” an official proceeding of Congress.

But if protesting the counting of the results of an election is obstruction, then there is the matter of Maryland Democrat Rep. Jamie Raskin, a member of the Jan. 6 Committee.

Democrats, in fact, tried to stop — that would be obstruct — the certification of the Electoral College vote in 2000, 2004, and 2016. Which is to say, they were obstructing “an official proceeding of Congress.” Among those Democrats was Raskin himself, who tried to reject Electoral College votes to declare Trump the winner in 2016.

So knowing that Raskin was obstructing an official proceeding of Congress, as he and his committee are charging Trump with doing — where is the criminal referral to the Justice Department for Raskin?

We now know that a significant number of Americans have said that had they known about the Post story, they would have voted for Trump. The paper headlined the story this way: “79% say ‘truthful’ coverage of Hunter Biden’s laptop would have changed 2020 election.”

On the subject of the 2020 election, 79% overall said it was “very” or “somewhat” likely that “a truthful interpretation of the laptop” would have resulted in the reelection of former President Donald Trump instead of the election of President Biden.

This blockbuster reported this, bold print supplied for emphasis:

The FBI pressured Twitter to suppress The Post’s blockbuster scoop about Hunter Biden’s laptop by warning it could be part of a Russian “hack and leak” operation — even while knowing the concern was unfounded, according to internal company records made public Monday.

…But The Post’s story was suppressed by Facebook and Twitter, which temporarily banned the outlet in the wake of its publication. It was also ignored or discredited by mainstream outlets, many of whom quietly substantiated the report months later.

In other words? Twitter and the FBI — not Trump — were colluding in a “Conspiracy to defraud the United States.”

What Twitter — urged on by the FBI — did in suppressing this blockbuster story is, yes indeed, deliberately rigging an election — something that was done with the backing of no less than the FBI, as Elon Musk has revealed.

The third charge against Trump is that he incited or assisted an insurrection. Again, what bunk. First of all, it is a fact that Trump offered to authorize 20,000 troops to protect the Capitol — and Speaker Nancy Pelosi refused them. Over there at John Solomon’s Just the News website is this headline:

The Pentagon first raised the possibility of sending National Guard troops to the U.S. Capitol four days before the Jan. 6 riots, setting in motion a series of rejections by Capitol Police and Democrats that left Congress vulnerable as threats of violence were rising, according to government memos that validate Trump administration officials’ long-held claims.

…An official timeline of the Jan. 6 tragedy assembled by Capitol Police shows that a Defense Department official reached out to a Capitol Police deputy chief, Sean Gallagher, on Jan. 2, 2021 to see if a request for troops was forthcoming, but the offer was quickly rejected after a consultation with then-Chief Steve Sund.

And who, exactly, was responsible for this rejection?

That would be, you guessed it, House Speaker Nancy Pelosi.

Kash Patel, the then-chief of staff to the Secretary of Defense, told Solomon:

The Capitol Police timeline shows what we have been saying for the last year — that DOD support via the National Guard was refused by the House and Senate sergeant at arms, who report to Pelosi … Now we have it in their own writing, days before Jan. 6. And despite the FBI warning of potential for serious disturbance, no perimeter was established, no agents put on the street, and no fence put up.

In other words, against the advice of the Trump administration, Trump’s offer to have thousands of troops to protect the Capitol was rejected by Pelosi.

And you know who else had responsibility for protecting the Capitol? That would be Raskin. Why?

Which is to say, in the style of the famous Sen. Howard Baker Watergate question, what did Raskin, Schumer, and Pelosi know of the warning of impending violence — and what did they do about it?

There can, at this juncture, be only one of two possible answers. Either Pelosi, Raskin, and Schumer knew of the intelligence report that warned of impending violence — and did nothing, thus making possible the ensuing riot that had been warned about.

Or Pelosi, Raskin, and Schumer did not know of the intelligence warning of potential violence, indicating a breathtaking level of sheer incompetence when it came to their most basic task in overseeing the Capitol Police: Ensuring the physical safety of the Capitol building, their House and Senate colleagues, their staffs, and any and everybody else whose job required them to be physically present in the Capitol.

Suffice it to say that the idea that Trump incited or assisted in an insurrection is pure partisan bunk. Yet again.

Then there’s charge No. 4. That Trump conspired to make a false statement.

Say what? To question the integrity of an election is a conspiracy to make a false story? As it happens, the release of all the Twitter files shows beyond doubt that there was in fact a serious effort by Big Tech to rig the 2020 election — with the FBI urging them on! There is nothing false about that. We now have the documentation in the Elon Musk–released Twitter files.

What we have is a corrupt Jan. 6 Committee. It is ruthlessly dishonest.

In January of 1981, my old boss, President Ronald Reagan, was asked at his first press conference how he proposed to deal with the communist Soviet Union. Reagan’s response is a perfect description of today’s Jan. 6 Committee. He answered this way: “The Soviets have “openly and publicly declared that the only morality they recognize is what will further their cause, meaning they reserve unto themselves the right to commit any crime, to lie, to cheat.”

Which is exactly a description of the Jan. 6 Committee. The committee reserves unto itself and its members the right to commit any crime, to lie, and to cheat — all in an obsessive, fanatic drive to get Trump.

When Republicans take control of the House, on the agenda should be an investigation of the Jan. 6 Committee and every one of its members. Memo to the committee — both members and staff: Save your documents, texts, emails, and phone records.

And while we’re on this subject of Trump being charged with instigating an insurrection, let’s go back in time a bit.

When I was growing up, the protests against the Vietnam War were raging. Leading the opposition to the war were three Democratic senators, all of whom would one day run for president on an anti-war platform. They would be Sens. Robert Kennedy of New York, Eugene McCarthy of Minnesota, and George McGovern of South Dakota.

In October of 1967, there was an anti-war protest in Washington, D.C. It began at the Lincoln Memorial. Then, as reported in the history of the U.S. Marshals Service, attention of the protestors shifted to the Pentagon. The Marshals Service reported what happened next, bold print supplied:

At 5:40 p.m., a determined crowd of 35,000 headed for the Pentagon. A smaller segment at the front stormed forward, scaled the walls, and forced their way into the Pentagon. The Deputies and soldiers were taunted and assaulted with vegetables, rocks, and bottles. The troops inside the Pentagon rushed outside as the violence escalated. A full-scale riot erupted.

In the current atmosphere hyped by the Jan. 6 Committee, that particular 1967 anti-war protest deserves a look. Using the standards that the Jan. 6 Committee is applying to Trump, if applied in 1967, you can be sure that Sens. Robert Kennedy, Eugene McCarthy, and George McGovern would all be charged with “instigating an insurrection.” It would be ridiculous, of course. Just like this charge against Trump is ridiculous.

But beyond that, what is being done with these so-called criminal referrals against Trump is nothing less than the criminalization of American politics, which will stain forever the historical reputations of all those involved. They aren’t just morally wrong — they are a dangerous assault on democracy.