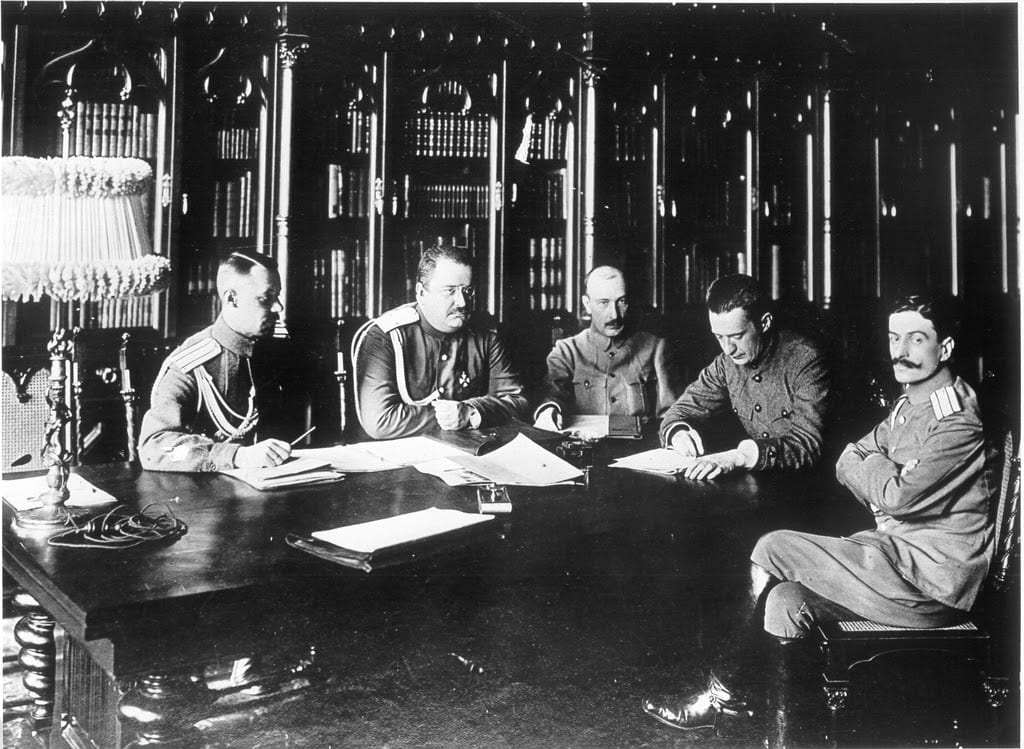 World War I resulted in two seemingly minor events which had epochal impact: a little known army operative took over a small, radical, racist political party in Germany and an exiled political agitator returned to Russia. The consequences of the latter, as intended by the German government, which facilitated his transit, were more immediate. In just a few months the Bolsheviks established tenuous control over remnants of the imperial Russian state. Out of which emerged the Soviet Union, which Ronald Reagan so accurately called the Evil Empire.

When the “Great War,” as the conflict was originally known, began in August 1914 the Entente’s members proved to be skilled propagandists. They said they were fighting a war for democracy and against Prussian militarism. It was the war to end war, a fabulous phrase even though the very definition of oxymoron. The maladroit and heavy-handed Germans inadvertently did much of the allies’ work.

Still, the Russian Empire was a great embarrassment to the Western allies. Belgium was perhaps the most murderous colonial power and revenge animated French military policy, but the Tsarist autocracy, a backward anti-Semitic despotism, most dramatically undercut Entente image-making. Under pressure the dynasty had been liberalizing, but remained far from liberal or democratic.

Then came a “constitutional” revolution in March (February in the old calendar) 1917. The Entente’s slogans suddenly seemed true even in Russia.

However, the Provisional Government was weak and political stability was beyond reach. Royalists, liberals, socialists, and communists all struggled for power. Foreign Minister Pavel Milyukov promised the allies that the government would continue the war and uphold the original annexationist war aims, which inflamed popular opposition.

For men in the ranks the conflict was a purposeless horror. Soldiers’ committees formed, calling for “peace without annexations or indemnities.” Urged on by former exile Vladimir Ilych Lenin’s Bolsheviks, military personnel mixed with civilians in calling for Milyukov’s resignation. In early May Milyukov and Defense Minister Alexander Guchkov were ousted. The latter was replaced by 36-year-old socialist Alexander Kerensky, who embarked upon a speaking tour at the front, supporting continuation of the war. “There is no Russian front. There is only one united allied front,” he expounded. And he plotted a new military offensive.

The latter was a disastrous decision. By June few Russians outside of Petrograd (St. Petersburg was renamed in 1914 to sound less German) backed participation in the conflict; the soldiers, in particular, expected the new authorities to end the war. The impact of his rhetorical efforts quickly faded; soldiers initially captivated by his eloquence soon remembered the inanity of the conflict. Lenin called Kerensky a “loudmouth” and “idiot,” as the Bolsheviks campaigned on a program of “peace, land, and bread.”

Nevertheless, Kerensky announced plans for his offensive, which began in July. He became prime minister the same month, but his military plans foundered. Soldiers wanted no more of the war. The army melted away and right-wing monarchists attempted a putsch, forcing Kerensky to rely upon Bolsheviks and other communists for support. His policy became no enemies on the left, empowering his most dangerous internal adversaries.

The German army advanced against declining resistance. It was Kerensky’s moment. He might have saved a revolution which sought to reform rather than destroy had he thought of the Russian people rather than the allied leaders, who treated even their own soldiers as expendable cannon fodder. Instead, he insisted on upholding the monarchy’s war aims. When asked decades later why he continued the fight, he responded that honor required doing so. Honor measured by governments which were sacrificing the norms of Western civilization.

The war was destroying its participants, eating away at the sinews of society. Mores, morals, and cultures were dissolving. The world — politicians, armies, aims, illusions, hopes — in which the conflict erupted had disappeared. The people doing the fighting, who had been dragged into war by sheltered elites, demanded, and deserved, a change. Kerensky could have led his nation to a better future had he listened to them instead of foreign rulers who cared only about maintaining a second military front in the east.

But he did not, and the war became the Provisional Government’s decisive weakness. Power gravitated to the Petrograd Soviet, a competing revolutionary force. In November the Bolsheviks struck, occupying government buildings and arresting government ministers. Virtually no one, other than an outnumbered women’s unit, was willing to fight for Kerensky’s government. He fled and his efforts to organize resistance failed. He went into exile in May 1918 as civil war flared in Russia.

In contrast, Lenin understood the necessity of ending the war at any price. Facing down much of his party, he insisted that the Bolsheviks make peace with Germany despite the harshness of the terms offered. (Although looking ahead a century the Brest-Litovsk Treaty turned out to be prescient, with Moscow shorn of its empire, a much more realistic outcome than the allies’ Versailles Treaty.) Otherwise, he warned, the Bolsheviks would be overthrown by someone else willing to sign.

Lenin barely outlived the conflict, dying after a series of strokes in 1924. Which opened the way for someone even more cruel and ruthless, who brilliantly understood the nature and operation of power. Playing his colleagues against one another to gain absolute authority in the land of the tsars, Joseph Stalin constructed one of the world’s infamous totalitarian death states. Tens of millions more lives were consumed, including many of the November revolution’s most devoted adherents and leaders. The Bolshevik regime finally collapsed of its own weight, corrupted within. On Christmas 1991 the Soviet flag was lowered for the last time over the Kremlin.

It took 74 years to reverse the consequences of Kerensky’s tragic mistake.

The forlorn Kerensky eventually ended up in America, donating his papers to the Hoover Institution on War, Revolution, and Peace. He died in 1970 at age 89 in what again turned out to be the crucial month of June. His obituary made the New York Times, but he was a forgotten man from a bygone era, whose slightly longer than 15 minutes of fame was long past. The Russian and Serbian Orthodox Churches delivered the final indignity, refusing to allow his burial. His body instead was flown to London for interment in a nondenominational cemetery.

Conservatives once understood the nature of war and feared its consequences. Today, however, some on the right appear to glory in the opportunity for revolutionary change. But World War I offers a stark reminder that it was the furies of war which opened the way for the terrible simplifiers, who released even greater horrors upon the globe in World War II. In short, men like Kerensky were necessary for men like Lenin to triumph. That lesson never should be forgotten.