The Talkies,Top Story deplorables,Feminism,Film,Hollywood The Hunt for Red State Deplorables - The American Spectator | USA News and Politics
Menu
The Talkies
The Hunt for Red State Deplorables
Staying away from the theater? Universal Pictures will stream “The Hunt” and other top releases starting Friday.
by Lou Aguilar
Betty Gilpin as Crystal in “The Hunt” (YouTube screenshot) 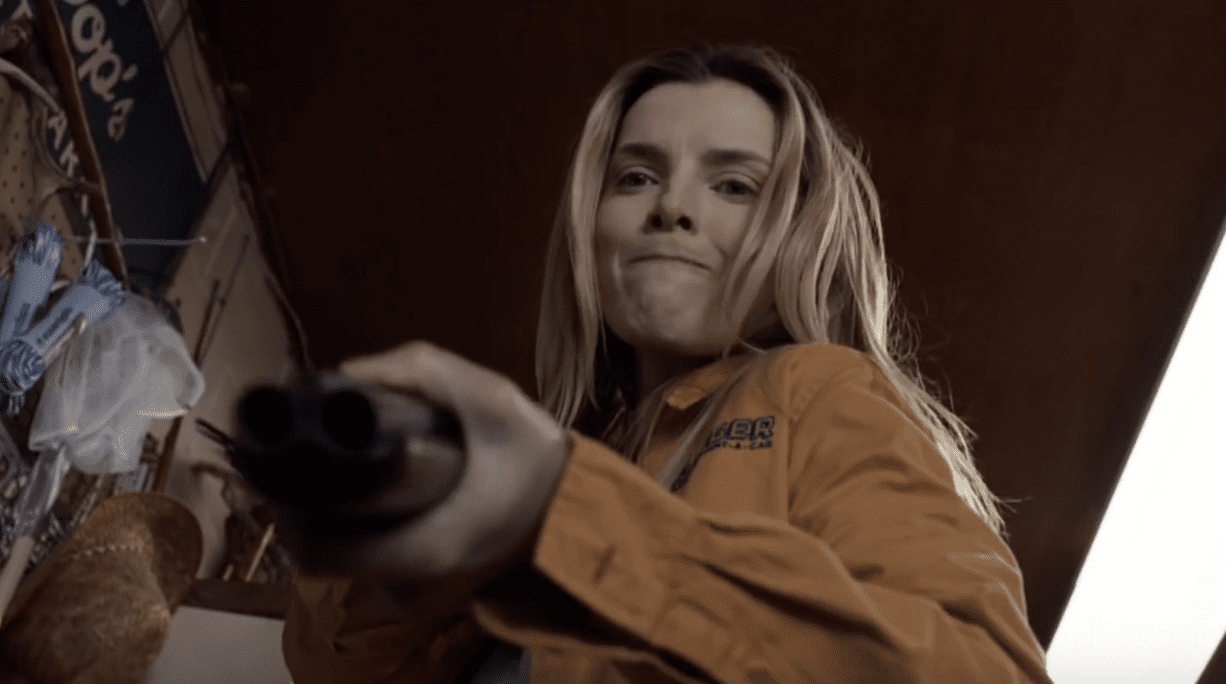 Until watching The Hunt last weekend, I hadn’t gone to an exploitation film since I stopped writing them in the early 2000s. They used to be fun, male-driven, action-filled rather than violent, and sexy. My first credit, Electra (1996), starred ex-Playboy Playmate Shannon Tweed, who once drew scores of young men to the local video store. It was one of the last sci-fi thrillers released by legendary producer Roger Corman, who practically patented the “B” picture and knew just where to draw the line. But this century, Hollywood crossed that line into dark, gory, formulaic, and asexually feminist junk. Horror, once my second favorite genre (after Westerns), mostly devolved into two poor subgenres: torture porn (Saw — Saw 3D) and found footage (Paranormal Activity — Paranormal Activity: The Ghost Dimension). A young producer, Jason Blum (The Purge), recently managed to bridge the gap between the Corman model and modern audience expectations. Blum’s newest production, The Hunt, though still needlessly gory and feminist, brings genuine wit to the old The Most Dangerous Game premise by spoofing both progressive and conservative clichés.

The ingenious premise of champagne liberals first tricking and then killing right-wing Americans initially worked against the film. Shortly before its original September 2019 release, two ideologically motivated mass shootings took place. On August 3, a white racist massacred 22 people at a predominantly Hispanic El Paso Walmart store. The very next day, an avowed Antifa member murdered nine people in a Dayton, Ohio, bar. Neither had any connection to The Hunt, but Universal Pictures diplomatically delayed the movie for six months until this Friday the 13th.

The Hunt, though still needlessly gory and feminist, brings genuine wit to the old The Most Dangerous Game premise by spoofing both progressive and conservative clichés.

The main plot unfolds after a predictable, gruesome opening scene in a private jet. Twelve strangers awaken in a desolate field, gagged, near a large crate. In an extremely suspenseful sequence, one man starts to open the crate while the others take cover. Before long, the people realize they’re being hunted and do their best to survive, alone or paired up. The viewer is masterfully manipulated into backing one red herring protagonist after another, and getting continually frustrated. It soon becomes clear that the prey are all red state conservatives, and the predators smug elitist liberals. The latter toy with the former by role-playing their own preconceptions of redneck Trump voters, directed by a mysterious woman, Athena, heard but unseen for two-thirds of the picture. Eventually, the true hero becomes clear — Crystal, a tough Afghan War veteran who turns out to be the liberals’ worst nightmare of a deplorable.

The film succeeds partly because it never takes itself seriously. Cinematic expertise abounds on both sides of the camera. Co-writers Damon Lindelof and Nick Cuse accomplish an extraordinary feat for contemporary film scribes: a cohesive, clever, topical script that never exposes which side of the political fence it’s been written from. That’s almost a progressive Hollywood miracle. In fact, the biggest laughs come at the leftists’ expense. “Is that a kimono?” one of them snipes at the other. “That’s appropriation.” Crystal, the “redneck” heroine, meanwhile, is sharp, tough, resourceful, and at no point the object of derision. In a nice touch, she surprises the villainess, Athena, with her understanding of the character of Snowball in George Orwell’s Animal Farm. “You’ve read Animal Farm?” gasps Athena.

TV director Craig Zobel (American Gods, Westworld) handles the big-screen thrills, twists, and action with a sure hand. The climactic hand-to-hand combat between Crystal and Athena is exciting and clearly portrayed, not the confusing fast-cut jumble that mars even many “A” films. The fact that Athena is played by two-time Best Actress Academy Award winner Hillary Swank (Boys Don’t Cry, Million-Dollar Baby) seems like a comedown for her, but she’s of course outstanding. She’s faring better career-wise than an almost unrecognizable Amy Madigan (Field of Dreams) in a small role. Betty Gilpin (TV’s GLOW) exudes intelligence and wariness as Crystal. She’s deliberately deglamorized to the point of Plain Jane status, because female sex appeal is verboten in modern film.

And that’s tied to The Hunt’s biggest problem. The main audience for exploitation, horror, and action films is still men. Yet every man on both sides of the Hunt is either a boob or a hapless victim. Crystal is not believable, despite Gilpin’s commendable performance. Her fight with Athena, for all its craftsmanship, is unreal and forced. Athena has already seen the damage Crystal did to her people and could easily electrocute her, yet invites her in for a physical duel to the death.

That setup would work much better with male characters, for whom fighting prowess is a matter of pride. A new action star might have been born, à la Bruce Willis in Die Hard or Liam Neeson in Taken, to much higher profits for this film. But the men saved the women in those films, and women can kill for themselves in Hollywood fantasy. The woke formula must be preserved at all costs — even financial and artistic ones.