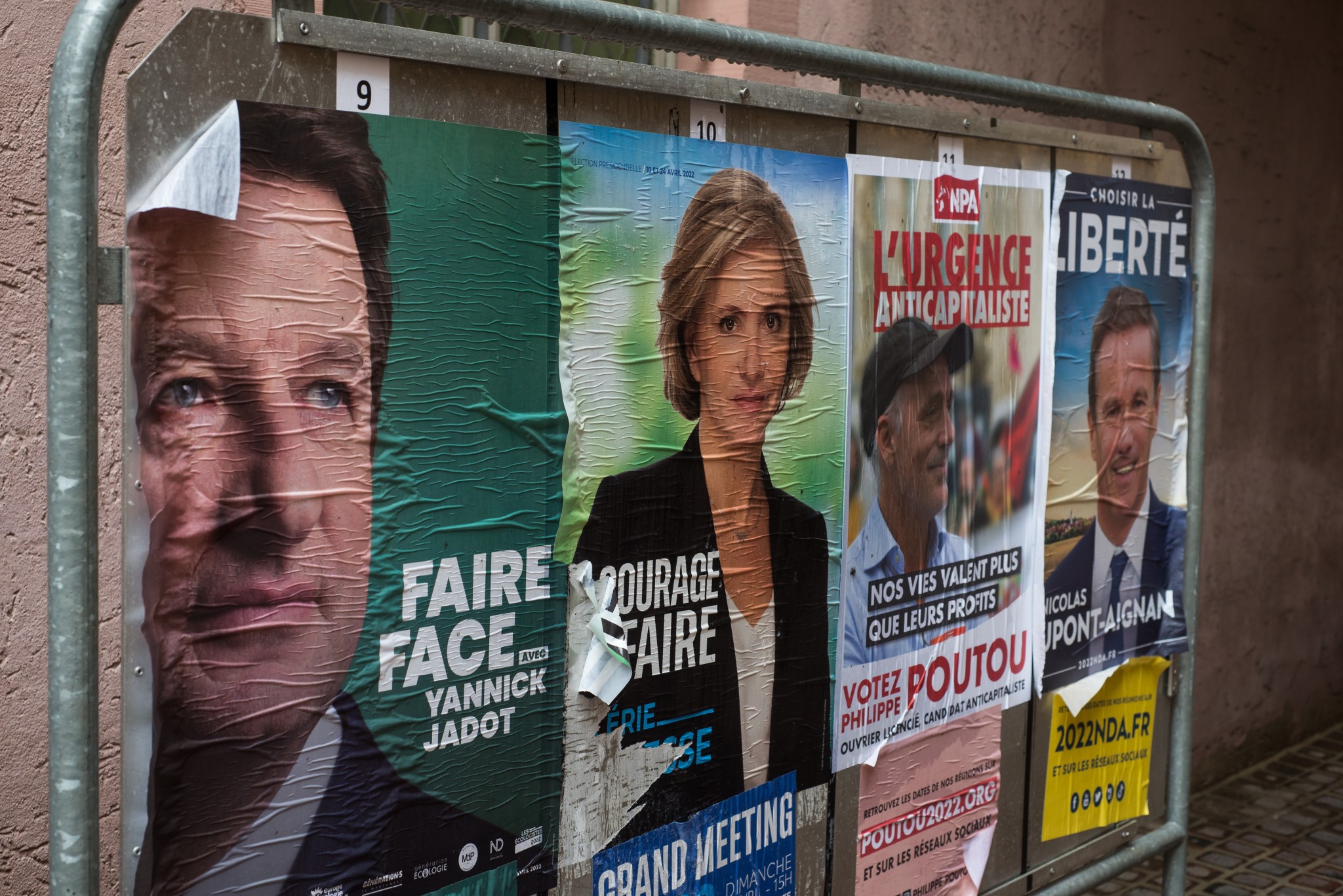 France’s much-anticipated 2022 presidential election, which held its first round on April 10, proved to be a déjà vu moment that recalled the 2017 election. The incumbent centrist, Emmanuel Macron of the Republic on the Move Party, garnered 27.6 percent of the vote, followed by Marine Le Pen of the far-right National Rally party with 23.0 percent. Voter participation was 74.0 percent, four points below the 2017 level of 77.77 percent. On April 24, Macron and Le Pen will once again go head-to-head in the election’s second round, which is expected to be much closer than that of 2017, when Macron easily defeated Le Pen 66 percent to 33 percent.

Valérie Pécresse, the candidate for the center-right The Republicans, took fifth place with only 4.8 percent of the vote behind Jean-Luc Mélenchon of the far-left France Unbowed with 22.2 percent, and journalist Éric Zemmour of the far-right Reconquest! Party with 7.2 percent. Pécresse’s paltry 5 percent take is 15 points below that of Republican candidate François Fillon, who placed third in the 2017 contest with 20 percent of the vote.

France’s 2022 election results represent the second time in the history of the Fifth Republic that the center-right party candidate failed to achieve enough votes to qualify for the second round. Fillon was the front-runner until his campaign was upended by the revelation that his wife Penelope had been paid 680,000 euros ($725,000) over 15 years while employed as his “parliamentary assistant,” a position that never existed. The Republicans also had a dismal showing in the 2019 European parliamentary elections, where they only garnered 8.25 percent of France’s vote.

Pécresse, the former president of the Île-de-France region and Jacques Chirac’s protégée, was polling in second place as recently as mid-December and was widely anticipated to face Macron in the second round. A free-market champion who supports budget reform, she presented her platform of “restoring order and purchasing power” as the antithesis of the Macron administration, which has been characterized by the yellow vest and COVID-19 protests and runaway spending, with public debt at 112 percent of GDP in 2021.

However, due to a host of factors, including the failure to secure an early endorsement from former President Nicolas Sarkozy and several faux pas on the campaign trail, her candidacy quickly cratered. Pécresse’s biggest weakness was her inability to project leadership. While Sarkozy has respect for Pécresse, who served as his minister of higher education, he intimated to his close associates that he does not think she possesses the special mix of competency and charisma to serve as president. Sarkozy also criticized her campaign for its lack of focus.

While Pécresse continued to solicit Sarkozy’s support, the endorsement never came and he delivered the ultimate snub by being a no-show at her last big rally on April 3 at the Paris Expo Porte de Versailles exhibition center.

Pécresse’s campaign was also beset by communication misfires. For instance, she was denounced for her comments at her mid-February rally at the Paris Zenith concert hall where she stated that she is not “resigned to the great replacement”, a reference to the conspiracy theory championed by Zemmour that white Europeans are being deliberately displaced by non-white immigrants. She was additionally called out for saying that she likes to “make French people of heart and not paper French people.” Paper people is a pejorative term that Jean-Marie Le Pen, the founder of the National Rally and father of Marine, originally used to describe French citizens of Algerian origin.

The poor performance of The Republicans in the last two presidential elections along with the 2019 parliamentary elections brings into question the future of the center-right party in France. In a recent article in the New European, Valérie Nataf writes about the declining relevance of France’s traditional Republican and Socialist parties, which were established in 1958 alongside the establishment of President Charles de Gaulle’s Fifth Republic. She describes the right as “torn between those who want to focus on traditional socioeconomics and those who want to focus on identity issues” and the left as fractured by infighting between more traditional socialist ideologues and proponents of “woke social ideology imported from American campuses.”

While France’s traditional left may already be a lost cause, as evidenced by its continued splintering into issue-specific new parties, the traditional right may still be salvageable. The bigger question is whether the results of the 2017 and 2022 presidential elections were reflective of an irrelevant message or a weak messenger. More specifically, is there still a viable segment of the Republican party that rejected Pécresse but would still support a more nuanced position on immigration coupled with a free-market economic platform from a more credible candidate?

For instance, Pécresse proposed a constitutional law that provides for immigration quotas based on country and profession versus Le Pen’s call for systemic expulsion of illegal immigrants. Pécresse’s economic platform was also more in keeping with traditional Republican orthodoxy. For instance, she suggested increasing the retirement age from 62 to 65 while Le Pen wants to further reduce it to 60 for anyone who has worked for 40 years. Pécresse recommended enabling corporations to be more competitive by reducing unnecessary taxes such as the corporate solidarity tax which greatly contrasts with Le Pen’s protectionist approach of price-fixing and subsidies for struggling industries.

Pécresse, who announced in her concession speech that she will be supporting Macron in the second round, will no doubt bring a segment of the center-right with her. Le Pen, who has slowly modulated her talking points away from immigration to focus more on how she is going to increase the power of the purse for French citizens, will continue to beat that drum for the next two weeks. Macron, faced with a more challenging balancing act as he needs to simultaneously appeal to the left, right, and center, will also continue to focus on the economy by highlighting France’s recent low unemployment statistics and GDP growth, and other encouraging financial talking points.

While it may be too soon to fully ascertain the long-term future of France’s center-right party, the broad discrepancies between the center-right and extreme right platforms along with the inevitable center-right pandering of Macron and Le Pen in the countdown to the second round present some hope. Furthermore, The Republicans will have another five years to regroup their party, recruit new potential candidates, and reposition their traditional message for the 2027 election.