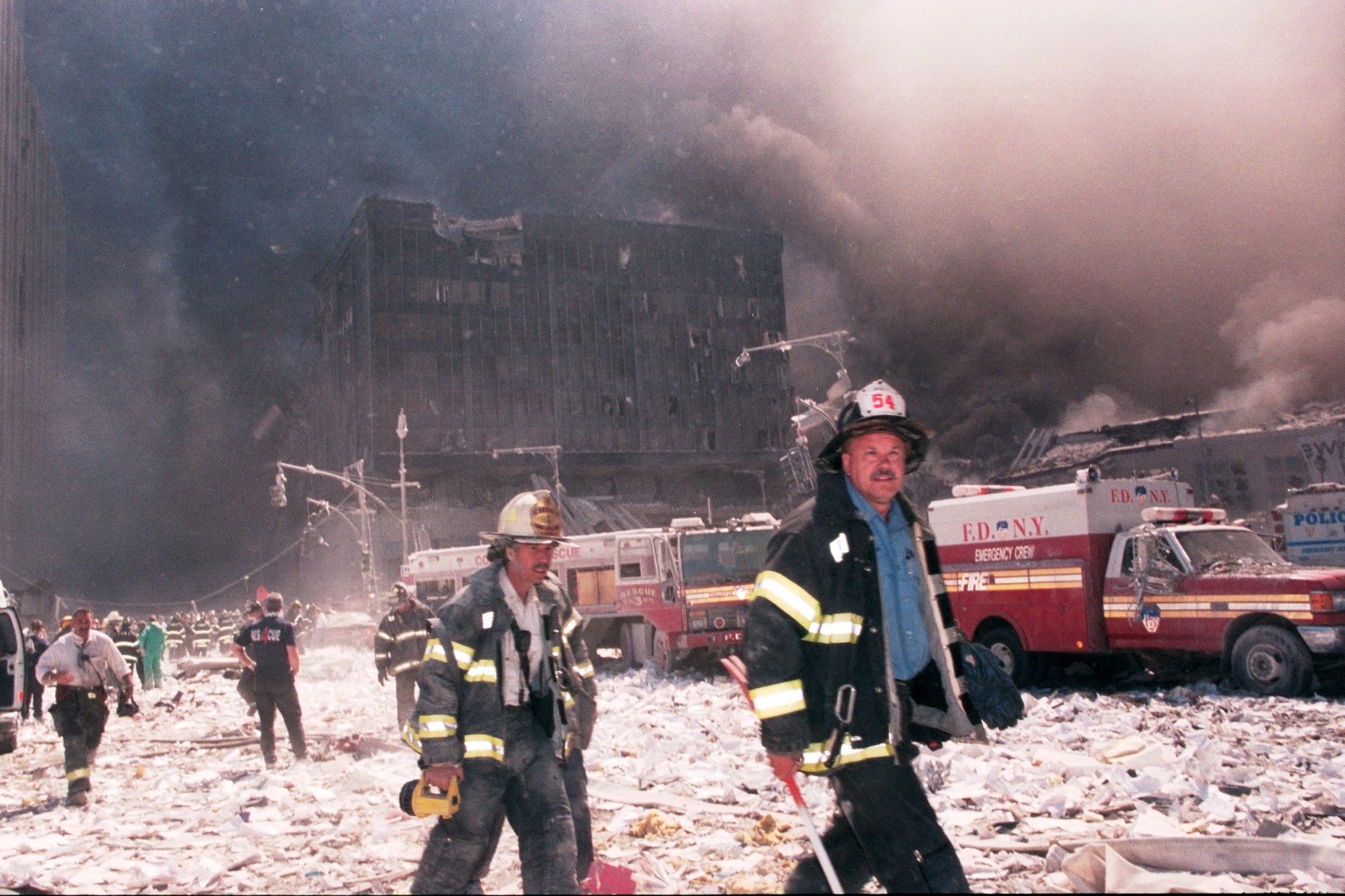 It was an eerie scene.

But for the activity of the rescue and recovery personnel and the rumbling machinery they used, it was a still, quiet night. Too still and quiet for Manhattan at any hour. This part of the city was closed for blocks around to all but those with passes indicating they should be here.

I was one of them, and at this moment I stood atop FDNY Engine 10 Ladder 10 looking out on what had once been the World Trade Center as one of the firefighters explained the operations taking place before us under something like stadium lights.

“Okay, you can see they have found human remains,” he said. “They are stopping briefly to pay their respects.”

It was simultaneously a moving and an upsetting scene. The air smelled of something ghastly. The firemen said it was charred human flesh. They would know. This station had lost five men on that awful day. Now “Ten House” had become a kind of extemporized command post for those working at Ground Zero.

I had been here for days as part of a group of volunteers I organized in the aftermath of the September 11th terrorist attacks carried out by the Islamic devotees of Osama bin Laden.

I have been to many places of vast human carnage. Hacksaw Ridge. Babyn Yar. Verdun. Dachau. The Bataclan. Buchenwald. Anywhere Nigeria. The Normandy Beaches. Mauthausen. Lubyanka. Mittelbau-Dora. Thailand’s Railway of Death. Auschwitz. But to be here so soon after the attacks, the rubble still retaining heat from the inferno, the surrounding buildings caked in dust and soot, the sense of urgency and the lingering shock of it all, this was different.

For many Americans, 9/11 meant coming to terms with something much of the rest of the world knew all too well: the reality of Islam. Americans were insulated from this reality by strict immigration policies that kept the Orcs out of the Shire. Now they were confronted with questions about who had done this and why.

Briefly, America was united. At least publicly. Democrats knew that now was not the time to denigrate the country that had given them everything. This restraint was strategic rather than out of any sort of respect for a grieving nation. Let the emotion of the moment pass and then return to the progressive playbook of anti-Americanism.

And return to it they did.

Even so, there were defections from the Left, my friend the late Christopher Hitchens perhaps being most prominent among them. In a 10th anniversary reflection piece on the attacks for Slate titled “Simply Evil,” Hitchens wrote:

[F]or me at any rate, the experience of engaging in the 9/11 politico-cultural wars was a vertiginous one in at least two ways. To begin with, I found myself for the first time in my life sharing the outlook of soldiers and cops, or at least of those soldiers and cops who had not (like George Tenet and most of the CIA) left us defenseless under open skies while well-known “no fly” names were allowed to pay cash for one-way tickets after having done perfunctory training at flight schools. My sympathies were wholeheartedly and unironically (and, I claim, rationally) with the forces of law and order. Second, I became heavily involved in defending my adopted country from an amazing campaign of defamation, in which large numbers of the intellectual class seemed determined at least to minimize the gravity of what had occurred, or to translate it into innocuous terms (poverty is the cause of political violence) that would leave their worldview undisturbed.

Three months after the publication of this Slate article, Christopher died. One can only imagine what he would have to say about all that has transpired since. The “amazing campaign of defamation” against his adopted country that he rightly perceived in the first decade after 9/11, has reached a crescendo in the second. American progressives, full of loathing for all that is America — its history, laws, traditions, people, and, above all, its Christian faith — now openly celebrate their hatred in a manner worthy of bin Laden himself.

It’s almost as if people have forgotten what 9/11 was all about. Then again, perhaps they never knew it or, more likely, they didn’t care. Under the acids of leftist cynicism, the truth of 9/11 has been lost to all but the most determined to remember it as images of the burning buildings quietly disappeared from our screens, progressive pundits obfuscated and shifted blame to Americans, and school curricula distorted the fact that Muslim terrorists who were educated, wealthy, and perfectly rational, gave their lives in an ongoing war to destroy America because they hated it and all that it represented.

The proper task of the “public intellectual” might be conceived as the responsibility to introduce complexity into the argument: the reminder that things are very infrequently as simple as they can be made to seem. But what I learned in a highly indelible manner from the events and arguments of September 2001 was this: Never, ever ignore the obvious either.

The enemy was obvious then just as surely as it is obvious now that the Biden administration and their co-conspirators in media, Big Tech, Hollywood, education, the self-righteous “Never Trump” faction (be they witting or not), and the brick-throwing shock troops of Antifa and Black Lives Matter have essentially aligned themselves with Osama bin Laden’s mission.

It is with some irony that Democrats have deemed it appropriate to label various conservative groups Taliban this or Taliban that — “Trump Taliban,” “Texas Taliban,” and “Republican Taliban” to name only a few — when it is they who not only share a common goal with the Taliban — namely, the destruction of America as we know it — but have armed them with no less than $85 billion in state-of-the-art military hardware, defended them daily in the doublespeak of Jen Psaki pressers, and, in an act of desecration of all who died on September 11th and in the War on Terror since, surrendered the whole damn country of Afghanistan to them. American Taliban, indeed.

As I returned this week to the memories of Ground Zero and the extraordinary people with whom it was my privilege to serve there, I grieve that the enemies of the freedoms enumerated in our Bill of Rights are no longer external to our country but occupy key positions of power within it — and leverage that power with malice aforethought.

Yes, what Osama bin Laden couldn’t do, the Biden administration hopes to accomplish. I mean, if it was your purpose to destroy America, would you do anything different from what this administration has done so far?

Larry Alex Taunton is a freelance columnist contributing to USA Today, Fox News, First Things, The Atlantic, The New York Post, CNN, Daily Caller, and The American Spectator. He is also the author of The Gospel Coalition Book of the Year The Faith of Christopher Hitchens, and the recently released Around the World in (More Than) 80 Days: Discovering What Makes America Great and Why We Must Fight to Save It. You can subscribe to his blog at larryalextaunton.com and find him on Twitter @larrytaunton.